© Andrea Canter
We're starting to see holiday ads and decorations, so we might as well getting into the spirit of the season--and there's plenty of jazz to add to the celebrations. This week brings the final two nights of the Zeitgeist New Music Cabaret with jazz, global music, and genre-defying new works at Studio Z; more great music on the Friday Night Jazz at the Nicollet and Saturday Night Jazz at the Black Dog series; the next installment of the 8 O'Clock Jump series at Walker West with Eric Gravatt; the return of fabled violinist Regina Carter and her Southern Comfort Project at the Dakota; the debut of the Adam Meckler Orchestra at Vieux Carré; and that's just a start on the list.

Big Gigs This Week
Friday, November 13. It would seem there's nothing but good luck on this Friday the 13th! JoAnn Funk and Jeff Brueske signal the holiday season by returning to Friday nights (along with Saturdays) in the Lobby Bar of the Saint Paul Hotel. The crooning jazz historian Arne Fogel takes his turn at Parma 8200 with Chris Lomheim and Steve Pikal in joyful support, while Bryan Nichols and James Buckley entertain over the dinner hours at the Icehouse and world music grooves take the stage with Axis Mundi at Hell's Kitchen. And Crooners Lounge features the Debbie Duncan Quartet with Minnesota's "First Lady of Song," following Happy Hour entertainment from singer/pianist/humorist Lori Dokken.

Friday Night Jazz at The Nicollet hosts the JazzINK Youth Showcase (7 pm), this month spotlighting the Jordan Anderson Quartet. 17-year-old pianist Jordan was on stage last month when the Will Schmid Quintet performed on the Showcase, and tonight it's most of that ensemble with Jordan-- saxophonist Gerhardt Robinson, bassist Alma Engebretson, and drummer Simon Petrick, four of the most talented and engaging teen jazzers around.  It's a hard act to follow but the funky fusionists Rare Medium are up to the challenge, playing the headline sets at 9 pm.

Over at Jazz Central, it's a rare appearance by the Charlie Christenson Five-- "a ragtag group of amateur comedians, political activists, college professors, traveling salesmen and European jazz enthusiasts" as well as accomplished musicians. The band includes Charlie--who heads the Voice Department at McNally Smith-- on keys and vocals, Adam Meckler on trumpet, Patrick Horigan on guitar and keys, Katie Marshall on guitar and vocals, and Matt Edlund on drums.

The Walker West 8 O'Clock Jump concert series continues with Eric Gravatt and Source Code, which tonight will feature Chris Thomson, Solomon Parham, Dean Magraw, Ron Evaniuk and Eric. This series has already presented Nicole Mitchell, Ron Carter and Yolande Bruce, and the 2016 line-up will be announced soon. It's a small performance space so call or go online now for tickets.

The Atlantis Quartet, coming off a short vacation, returns to Vieux Carré, and tonight they help celebrate Chris Bates' birthday as well as the birth of Brandon Wozniak's daughter. Soon they will also have a new CD to celebrate. Jeremy Walker and Anthony Cox start out with some cool duo sets.

Saturday, November 14. The double-header at the Black Dog (Saturday Night Jazz series) is a McNally Smith affair, with most of the musicians having student and/or faculty ties to the St. Paul music school: First up, a voice/guitar duo dubbed Tempestad (Maria Vejdani and Tomás Simpson​), followed by the Gerard Ahlgren Quintet led by trumpeter Algren with a crew of very able past and current students -- Lucia Sarmiento on sax, Kelly Blau on guitar, Ry Dill on bass and Lars Johnson on drums. This is Ahlgren's Black Dog debut, but we've heard most of these musicians in other contexts including the McNally X-Tet, Breaking Brass, Lucia's Quintet, etc.

At Studio Z, it's the finale of the Zeitgeist New Music Cabaret, featuring an ensemble led by trumpeter Solomon Parham, the Zeitgeist ensemble, and Gao Hong performing original works on the Chinese pipa in collaboration with sound designers.

The Travis Anderson Trio returns to the Normandy Kitchen, Nachito Herrera holds his monthly firestorm at the Dakota, Benny Weinbeck and his intrepid trio (Gordy Johnson and Phil Hey) perform in the lounge at Parma 8200, the Talking Strings take over the Loring Pasta Bar; Tim Sparks and James Buckley hold a string fest over the dinner hours at the Icehouse, followed by a return engagement with the young trombone duo, the Potash Twins.

Sunday, November 15. Jazz Brunch is easy to find -- Patty and the Buttons at the Aster, the Andrew Walesch Trio at Crooners, Robert Everest at Maria's. Later in the day, Solomon Parham hosts his Sessions at the Bedlam, the Zacc Harris Trio prevails at the Riverview Wine Bar.

Monday, November 16. It's been a few years since master jazz violinist Regina Carter has been in the Twin Cities, and now she's back with her Southern Comfort ensemble for two sets at the Dakota. Featuring folk tunes and newer compositions that honor her grandfather's southern roots, the MacArthur "genius grant" recipient makes the violin sing in the key of jazz on each of her diverse projects, and her bands always include the best artists on the scene.

At Jazz Central, the spotlight shines on Berklee-trained drummer/multi-instrumentalist Rodney Rocques, aka Rodney Ruckus, and his Ruckus Quintet. After completing college studies, Rodney hit the road with the likes of Tia Fuller, Herbie Hancock, Billy Childs and more.

And at the Black Dog, it's another night with the Cherry Spoon Collective, an area experimental music ensemble led by Michelle Kinney (cello), Nick Guadette (bass) and Patrick O’Keefe (sax), along with a revolving cast of the best of Twin Cities improvisers. 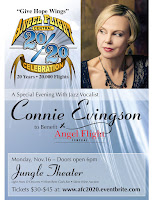 There's good music for a good cause tonight at the Jungle Theater, where vocalist Connie Evingson teams up with the swinging Patty and the Buttons in a fundraiser ("20/20") for Angel Flight, a charity organization that provides volunteer pilots and planes to transport individuals to access critical medical care. Tickets and information at www.afc2020.eventbrite.com

Tuesday, November 17. Move the tables and chairs, the Adam Meckler Orchestra will take over much of the central space at Vieux Carré! The AMO has been rather quiet lately as leader Adam has been on the road, recording with his quintet and adjusting to fatherhood, but they're back in full sound with 18 of the area's finest, and many among the area's youngest, jazz artists. The setlist features all original music. Guitarist Joel Shapira goes solo for the early evening sets.

At Crooners Lounge, Tuesday Instrumental Jazz Night features the return of the Tommy O'Donnell Trio with Gordy Johnson and Phil Hey, a sublime and swinging piano band that should be a perfect match to the fine sound in the lounge and the equally fine fare on the new menu.

Wednesday, November 18. Arne Fogel and the Wolverines, one of the longest-running partnerships in area jazz, take the stage at Crooners Lounge. In a far different vein, at Jazz Central, "Sisters" (aka the Baldwin Sisters) are actually musical brothers (unrelated)-- trumpeters Jake Baldwin and Noah Ophoven-Baldwin, offering up some free-wheeling improv duets on "New Music Night."

Thursday, November 19. At Vieux Carré, Jon Pemberton (on piano) opens the evening for a McNally Smith Night featuring the McNally X-Tet, led by Pete Whitman and modeled after his famed X-Tet.

At Jazz Central, Vocal Jazz Night offers something a little different as singers Sheridan Zuther and Katia Cardenas try out solos and duets from Carole King's iconic Tapestry album. It's the first time these singers have presented King's music. More vocal jazz at Crooners tonight with the Ginger Commodore Quartet on stage.

Jazz in the Target Atrium at Orchestra Hall, curated and led by Jeremy Walker, holds its second concert of the season, with special guest, trumpeter Ron Miles. "Looking East: New York Looms Large" considers the music of Ellington, Gershwin and others who celebrated their home town in their compositions. The Atrium Jazz Ensemble tonight features Chris Thomson, Jeremy Walker, Jeff Brueske and Tim Zhorne along with Denver-based trumpet star Miles, who was a celebrated guest last season as well.

Khyber Pass Cafe presents a too-rare performance by Michael Lewis, in town for a late fall visit. This is one of the metro's smallest venues, repeatedly offering some of the most adventurous music.

A late night session at the Icehouse brings drummer Kevin Washington to the stage with his band, playing some music and hosting a jam session--and no cover!

More Jazz!
Keep up with the live jazz scene in the Twin Cities. The most comprehensive jazz calendar can be found at Jazz Police, but you will also find jazz listings at KBEM, Rhythm and Grooves and Jazz Near You. KBEM and KFAI radio host jazz programs regularly and provide daily notices of jazz gigs and concerts. The live edition of The Lead Sheet can be heard at 4:40 pm on Thursdays on KBEM, excerpts rebroadcast at 7:20 am on Fridays. (Special guest on November 12 --Andrew Walesch re his big band Frank Sinatra show and new CD; November 19 --Jeremy Walker re the Jazz in the Target Atrium series). Venues and artists are reminded to send information to online and print calendars (e.g. tc@jazzpolice.com).