© Andrea Canter
Feels like Autumn in Minnesota! And our jazz venues are turning up the heat, from gigs with the best of our young lions to veteran performers in diverse contexts, including a CD release from very familiar musicians playing in the unexpected context of romantic standards.

Big Gigs This Week
Friday, September 25. Young lions chew up the stage at The Nicollet on the Friday Night Jazz Series! I first heard young saxophonist Lucia Sarmiento a couple years ago on the youth stage at the Twin Cities Jazz Festival. From Lima Peru, she studied with one of our favorite visiting artists, Andres Prado, and now is pursuing advanced studies at McNally Smith with Pete Whitman. She leads a band of like-minded artists who appeared on the Sixth Street stage at the 2015 festival.

At Parma 8200 in Bloomington, it's the monthly evening with the Maud Hixson Trio, with Rick Carlson and Gordy Johnson. Maud and Rick just returned from Portland, OR where they performed her "Skyscraper Wits" show-- music from Porter, Hart and Mercer, so perhaps some of that repertoire will be on the Parma setlist?

At Vieux Carré, start the evening with the sublime piano/bass duo of Jeremy Walker and Jeff Brueske, then re-boot your ears with the Javi Santiago Sextet. The young pianist, recently relocated back home after a few years honing his chops in New York, has assembled a band of the top young guns in town-- trumpeter Jake Baldwin, bassist Ted Olson, and drummer Miguel Hurtado, along with two of our most prolific veterans--guitarist Zacc Harris and saxophonist Pete Whitman. It will be a blast. 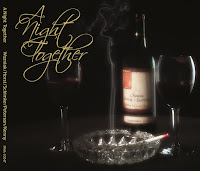 Saturday, September 26. Saturday Night Jazz at the Black Dog makes a bit of a right turn tonight with a CD release party for A Night Together. Conceived and funded by frequent Black Dog patrons Holly Augustine and Bill Coulter, the recording puts familiar Black Dog performers Brandon Wozniak, Steve Kenny, Peter Schimke, Billy Peterson and Kenny Horst into less familiar territory--standards that tell the story of love ("A Night Together") from preamble ("Suggestion") to conclusion ("Denouement"), arranged by Adam Meckler.

To be sure there is an initial jolt of adrenalin, the 7 pm opening set features the John Penny Trio--guitarist/vocalist John with bassist Charlie Riddle and drummer Davu Seru. Surely a night with something for everyone!

At the Dakota, there's always some fun as well as music flowing with Patty Peterson and Friends, and tonight's "Friends" include both brother Ricky Peterson on keys and frequent guest Steve Cole on sax, along with Jason Peterson DeLaire, Joe Elliot, Billy Franze, and Bobby Vandell.

Across the river, Minnesota's First Lady of Song, Debbie Duncan, entertains as only she can at Vieux Carré. (I just ran into her, almost literally, on the grounds of the Detroit Jazz Festival-- and I think it's time she performed there for her hometown crowds.)

Regular Saturday night gigs continue-- JoAnn Funk and Jeff Brueske in the Lobby Bar of the Saint Paul Hotel; the swinging Talking Strings (Pavel Jany, Gary Schulte) at the Loring Pasta Bar; and the epitome of piano jazz at Parma 8200 with the Benny Weinbeck Trio.

Sunday, September 27. Sunday Jazz Brunch is offered at Crooners Lounge with songbird Maud Hixson; at the Aster Cafe with the swinging Patty and the Buttons; and at Maria's Cafe with Brazilian jazz favorite Robert Everest. End the day in relaxed surroundings at the Riverview Wine Bar with the Zacc Harris Trio.

Tonight the young turks of Jazzland Wonderband debut at Crooners Lounge, playing the music of Dixieland and the Swing era. These are musicians you have heard in more contemporary contexts-- Cameron Kinghorn, Nelson Devereaux, Keith Hilson, Evan Clark and Andres Crovetti.

JT's Jazz Implosion at the Icehouse features a star-bright organ trio, with Kevin Gastonguay, Zacc Harris and JT himself. This is no church organ gig!

Tuesday, September 29. The benefit of a fifth Tuesday this month-- the Acme Jazz Company (with vocalist Arne Fogel) performs on Big Band night at Jazz Central Studios!  With one of the most original books among regional big bands, Acme brings a modern twist to Big Band sounds.

Tuesday Night instrumental jazz series continues at Crooners with the Dave Graf Quartet. We seldom hear the ace trombonist in a leading role, and he has gathered some simpatico pals--Dan Leahy on piano, Gary Raynor on bass and Mac Santiago on drums.

A worthy double-header at Vieux Carré: Start your evening with calm elegance from the solo piano of Chris Lomheim. Then jump-start your cardio system with the ever-surprising Red Planet, featuring Dean Magraw, Chris Bates and Jay Epstein in the band's VC debut.

More Jazz!
Keep up with the live jazz scene in the Twin Cities. The most comprehensive jazz calendar can be found at Jazz Police, but you will also find jazz listings at KBEM, Rhythm and Grooves and Jazz Near You. KBEM and KFAI radio host jazz programs regularly and provide daily notices of jazz gigs and concerts. The live edition of The Lead Sheet can be heard at 4:40 pm on Thursdays on KBEM, excerpts rebroadcast at 7:40 am on Fridays. (Special guest September 3--Peter Leggett of Walker West, on the new jazz series with Nicole Mitchell and soon Ron Carter.) Venues and artists are reminded to send information to online and print calendars (e.g. tc@jazzpolice.com).

Posted by Canterjazz at 4:10 PM