We really don't need the drastic plunge in temperatures to remind us that the holidays are coming. Thanks to the ever-impatient media, we have daily (hourly?) hints of the sounds, sights and tastes of the season. On the plus side, it seems more and more special music events are filling the rest of the 2014 calendar, including some jazz CD release celebrations, the launch of the new MacPhail "Spotlight" season, a "spotlight" on a young up-and-comer, and more. 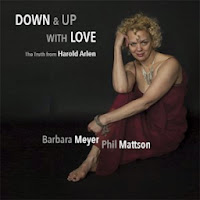 Friday, November 14. Vocalist Barbara Meyer is known among cabaret and theater fans, maybe less so among local jazzers. Her new album with pianist Phil Mattson, Down and Up With Love: The Truth From Harold Arlen, should clarify her talents. Like the great music storytellers, Meyer adds heart and drama to lyric, and Harold Arlen wrote some doozies. Barbara and Phil cover some of the best known including That Old Black Magic, but they also introduce many of us to the less familiar of Arlen's love (or anti-love) songs, including a sarcastic, over-the-top delight, "I Don't Think I'll End It All Today." The CD release will be celebrated at The Nicollet. There will be enough swing for the dance community to turn out but don't let yourself be distracted from the words or the interpretations that Barbara delivers.


The lyrics and stories are also essentials to every performance from Maud Hixson, who tonight joins Rick Carlson and Gordy Johnson at Parma 8200.  No matter what the context, you can count on Maud to introduce you to a new tune, a new songwriter, or simply a new reading.


Sunday, November 16. Laura Caviani has long been a favorite performer and composer on the Twin Cities Jazz Scene, but this afternoon, she dons a new hat--conductor and director of jazz ensembles at Carleton College in Northfield, presenting the many talents of the student jazz band.


Bethlehem Lutheran  Church will host the fall installment of Framework's collaboration with the Bach Society. The jazz trio (Chris Olson, Chris Bates and Jay Epstein) have joined forces with the classical ensemble for the past three years, and tonight add in the extra musical attraction of recorder specialist Clea Galhano. To quote Chris Bates, "Fun stuff!"


Monday, November 17. Usually the "Featured Artist" series at Jazz Central brings attention to a veteran artist, or on occasion to a young up-and-coming talent. But a high school senior? Tonight's featured artist is 17-year-old bassist Charlie Lincoln, pride of South High, member of the Dakota Combo, and recently on several area stages with the great Eric Kamau Gravatt and Source Code.  Tonight Charlie reprises a new band that debuted at the recent Zeitgeist New Music Cabaret, with Levi Schwartzberg, Peter Goggin, Benjamin Beyene, Gavin Brehn and Sam Stroup. Says Charlie, "Original compositions and arrangements by yours truly played by some master musicians... Nonjazzers fear now-- there will be something for everybody at this show!"


A relative veteran in comparison, 20-something Jake Baldwin and Cameron Kinghorn bring their new BDP Quintet back to the Dakota after their auspicious premiere on the Late Night calendar little over a week ago. But tonight it's prime time. Kinghorn, who also plays trumpet, has a voice touched with Chet Baker, perfect for the band's broad repertoire of jazz, R&B and touches of pop. Baldwin, trumpet and sometimes trombone, leads the very musical combinations with Ted Godbout on keys, Andrew Foreman on bass and Andres Crovetti on drums.


Tuesday, November 18. It's Big Band night at Jazz Central, tonight with the Explosion Big Band led by Doug Haining and Scott Agster, and featuring an all-star cast blazing through modern charts. Sit close-- it's not electrically charged! Enjoy big band music as it was intended to be heard! And if one big band is not enough, take in another as the Jack Brass Band holds their monthly gig at The Amsterdam in St Paul. Between the two gigs, there might not be too many big band specialists on the loose tonight!


Thursday, November 19. The Charlie Christenson Standards Trio is the latest project from the nationally renowned jazz vocalist, composer and arranger. And it's a bit beyond the usual for Jazz Vocal Night at Jazz Central, with Graydon Peterson on bass and Matt Edlund on drums. “We’ve left the piano, the guitar behind,” Christenson says, “but that doesn’t mean we’ve forsaken harmony. Our three unique and singular voices play together in ways that can feel exposed – mostly in a good way."


More Jazz!
Keep up with the live jazz scene in the Twin Cities -- check out calendars at Jazz Police, KBEM, Rhythm and Grooves and All About Jazz, as well as here on the blog.  More jazz to tickle your ears: