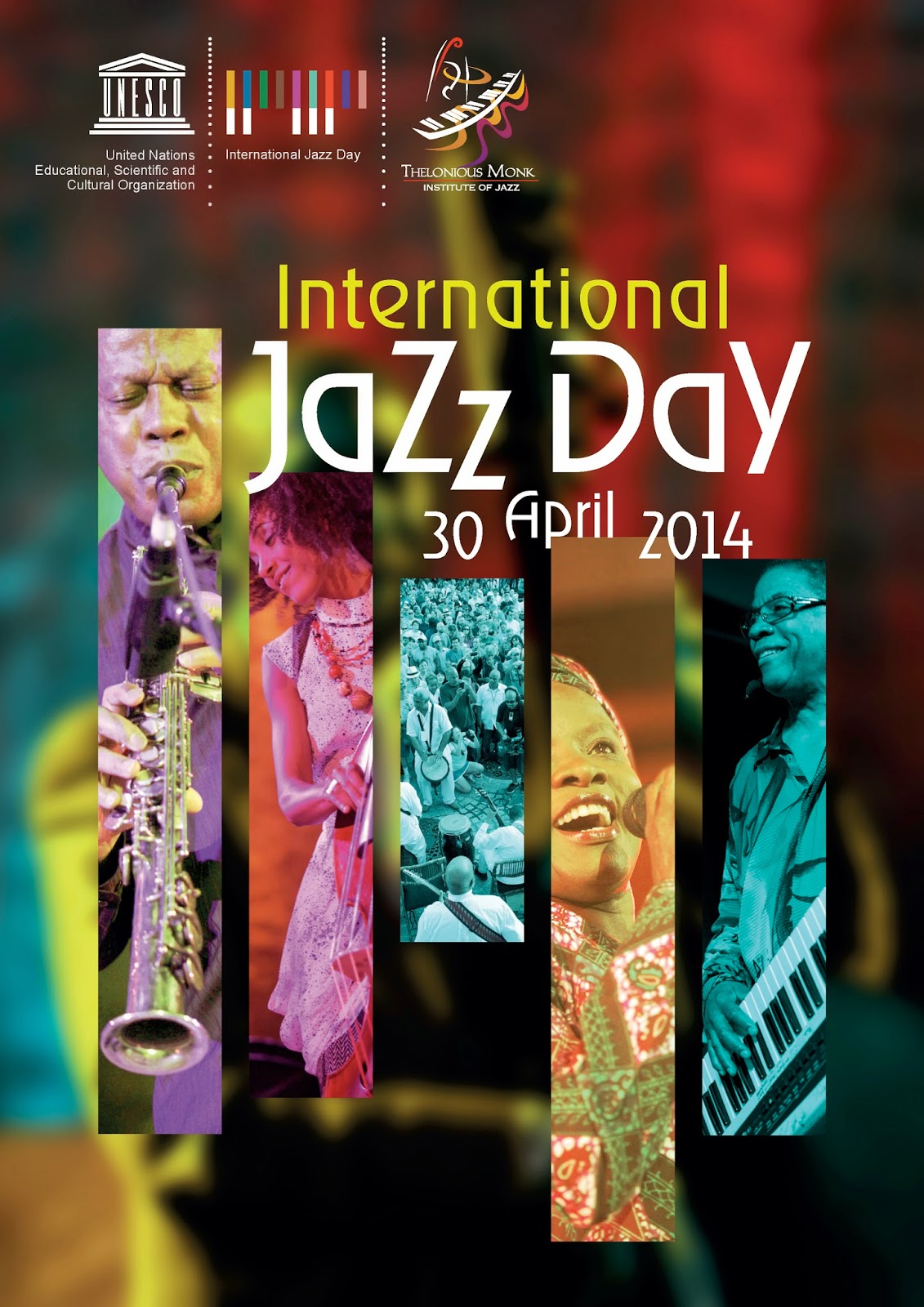 
It's been Jazz Appreciation Month and on April 30th, it's the third annual International Jazz Day sponsored by UNESCO, and featuring hundreds of registered Jazz Day events throughout the world. Minnesota was the last of the 50 states to register this year -- but now at least two local venues have joined the international listing -- note April 30th gigs at Jazz Central (Kevin Gastonguay Quartet) and the Black Dog (Foreman/Feily/Schmidt/Musselman), ensuring both cities are on the map and, in both cases, boasting some of our most inventive young artists. And of course, there is more jazz this week (including visits from Miguel Zenon and Joe Lovano; the return of the Atlantis Quartet, Jazz Noir and Soul Cafe; an Earth Day Celebration with Dave Milne's One World Consort) and on April 30th. Let's make every day Jazz Day!


Friday, April 25. Busy individually and as a band, the Atlantis Quartet returns to action at Jazz Central on the Bridge Series. As a frequent attraction at the Artists Quarter, it's been a bit harder to catch this band of composers and explorers lately, but fortunately their music transcends venue. BTW, the guys will headline the Mears Park Main Stage opening night of the upcoming Twin Cities Jazz Festival!

At Parma 8200, Thomas Bruce returns to soften your week-end stress levels with sophisticated vocals to accompany your pasta or dolce indulgences.


Saturday, April 26. At the Hopkins High School Auditorium, JazzMN Orchestra closes out a season of dazzling concerts with one more, this time featuring one of the hottest alto saxophonists of the new millenium, Miguel Zenón. He's been to town with the SF Jazz Collective, of which he is a founding member, and he's appeared with his Esta Plena ensemble; this will be his first local gig with a big band. Expect to hear some injections of the folk traditions of his native Puerto Rico. And earlier in the day, come over to the MacPhail Center for Music (1-2 pm) for a free public clinic headed by Zenón.


Sunday, April 27. Perhaps this should be Minnesota Jazz Day! Start your day with brunch at the Icehouse and a new trio -- Mike Lewis (on bass, not sax!), Jeremy Ylvisaker on guitar, and Adrian Suarez on drums.  Mike and Jeremy play together in Alpha Consumer; Adrian gets around but most often with Graydon Peterson and Vinnie Rose. Mike is not new to the bass but his long tenure with Happy Apple and Fat Kid Wednesdays has kept his saxophone in the spotlight.


Your choices later in the day might give you serious conflict: At the Dakota, KBEM radio brings the second installment of Jazz Noir, a live radio broadcast in the style of old-time radio. The Black Hand Side That Feeds You --a story about social upheaval and the rise of jazz on Minneapolis' North Side of the late 60s-- was written by Christina Ham and scored by John Penny, and features actors, vocalists and instrumentalists in two performances, the later show broadcast live.

Or consider celebrating Earth Day with an unusual ensemble merging jazz quartet and string quartet under the leadership of saxophonist/educator David Milne, dubbed the One World Consort. Milne has rearranged Fred Strum's Mother Earth suite, which puts together classical and folkloric themes with an improvisational element. The concert takes place at Lake Harriet Spiritual Community with sponsorship from several area eco-advocacy groups.


Monday, April 28.  It's hard to come up with new accolades for Joe Lovano's Us Five, which returns to the Dakota for just one night. Lovano has always surrounded himself with great artists and composers, from his days with Woody Herman to more recent collaborations with Paul Motian, Bill Frisell, Hank Jones, and now a quartet with Jack DeJohnette and Esperanza Spalding. But perhaps Us Five has been the capstone of his career thus far, a two-drumset ensemble that has released three acclaimed recordings in the band debuted in 2009. Spalding remains as bassist in the recording studio and occasionally on tour, but typically bass duties belong to Peter Slavov, who has proven himself more than worthy of the position, along with pianist James Weidman (Matt Wilson), drummer Otis Brown III (Lovano Nonet), and drummer Francisco Mela (Kenny Barron, Melissa Aldana, McCoy Tyner, and his Cuban Safari). Lovano never rests on his laurels, which explains his taking top tenor sax honors in the most recent Jazz Times, Downbeat and Jazz Journalists Association polls, as well as a first win in JJA's Multi Reeds category. Expect him to turn up with a taragato, G-Mezzo saxophone and Aulochrome in his box of horns.


Tuesday, April 29. There's a fifth Tuesday this month, meaning Jazz Central can squeeze in another big band. Making their JC debut will be the Acme Jazz Company, directed by Doug Rasmussen,  and it's also a celebration of their first CD. On hand will be vocal titan Arne Fogel, guitarist Joan Griffith, alto saxman Miles Mortenson, tenor saxman Bob Parsons, trumpeter Pete Davis, and guest Bruce Thornton on tenor and clarinet, along with the rest of the Company of topnotch big band artists. Acme has performed since 2008 and has amassed one of the largest collections of original charts in the U.S.


Wednesday, April 30, International Jazz Day. Perhaps a coincidence but International Jazz Day in Minnesota features two young hip bands on each side of the metro. At Jazz Central, the Kevin Gastonguay Quartet features prolific composer and pianist Gastonguay (founder of Sol Spectre), Zacc Harris on guitar, Andrew Bergmann on bass, and Greg Schutte on drums. This is Jazz Day at Jazz Central, but don't expect purity -- Kevin is known for blurring the lines between jazz, R&B, rock and more.


Although not a registered Jazz Day event, a new trio at Barbette is certainly worthy: (Park)Evans/ (Brian) Courage/ (Pete) Hennig is a new collective of active metro jazzers who have worked with Parker Paisley, the Atlantis Quartet, and Courageous Endeavors. Their repertoire draws from a mix of original compositions, fresh new arrangements, and lesser known standards. (See other gigs that fall on Jazz Day on the calendar below.)


Monday, April 28. Charmin Michelle and Denny Malmberg at Fireside Pizza; University of Minnesota Jazz Ensemble I and II at Ted Mann; Lars-Erik Larson and the No Coast Quartet at the Icehouse; Dave Karr Quartet at Jazz Central


. May 2, Illicit Sextet at the Black Dog


. May 3, PipJazz "Women in Jazz" workshop and concert at Maplewood Community Center


. May 3, Paul Renz Trio, Jazz at the Steeple Center (Rosemount)


. May 5, Peter Vircks Quartet at the Icehouse


. May 6, Dean Magraw and Eric Gravatt at the Black Dog


. May 7, Julian Lage and Chris Eldridge at the Dakota


. May 8, Jazz Thursdays with the Dakota Combo at Antonello Hall (MacPhail Center for Music)


. May 9, Courageous Endeavors at the Icehouse


. May 10, Yohannes Tona with Geoff LeCrone and Demetrius Mabry, Jazz at Studio Z


. May 15-18, Ragamala Dance Company and Rudresh Mahanthappa at the Walker


. May 19, Jean Brice Godet with the Fantastic Merlins /Atlantis Quartet at the Icehouse


. June 2, Tom Rainey and Ingrid Laubrock at the Icehouse


. July 1, Nels Cline and Julian Lage at the Dakota