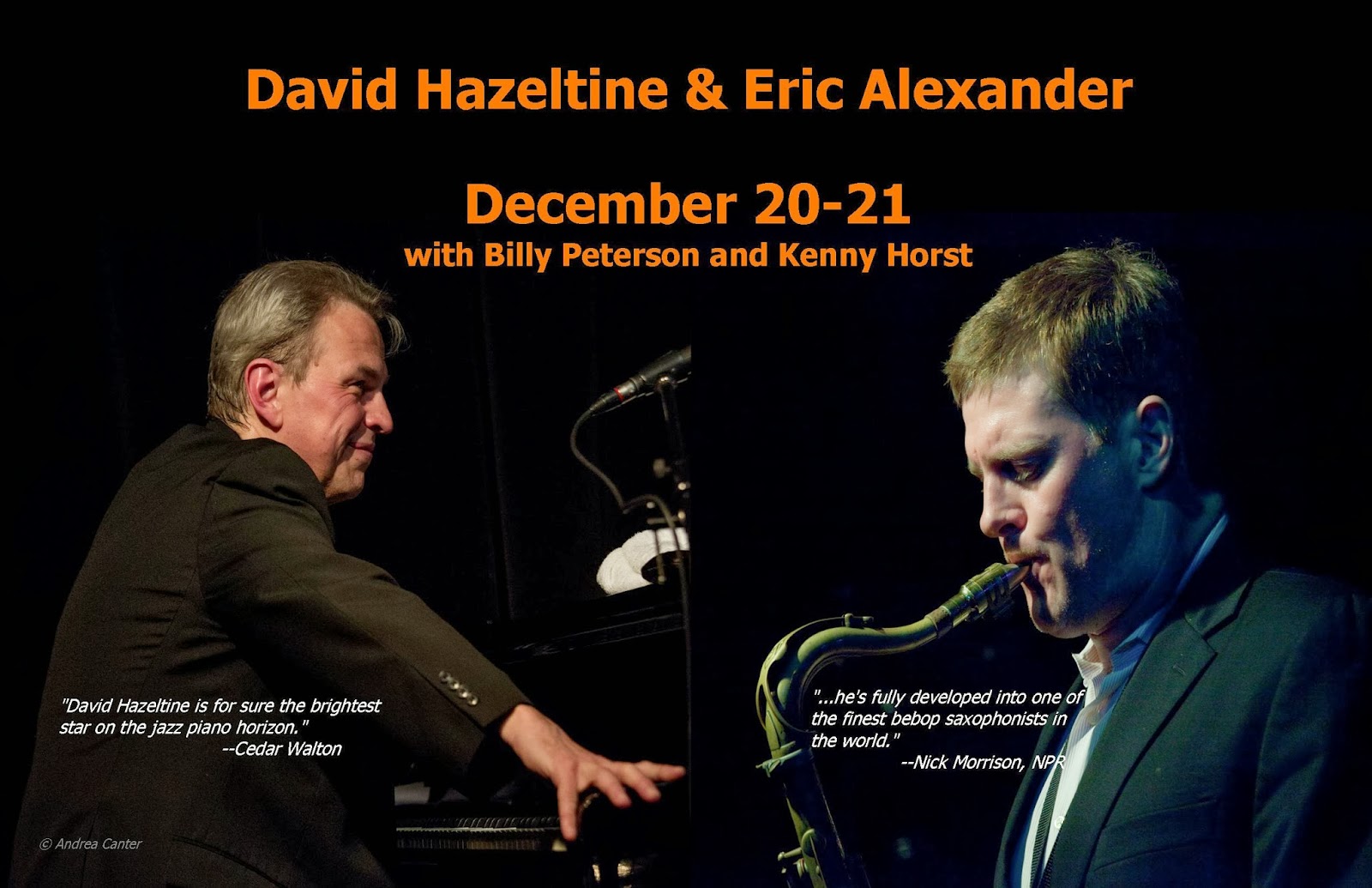 
The Artists Quarter Countdown continues, with two of its long-time favorite national artists joining together this weekend and one of its longest-running local bands closing out the week. Meanwhile the holidays bring heroines of song to concert and club stages, and the annual Bad Plus residency begins at the Dakota. The weather outside might be frightful, but the jazz inside is bountiful.


Friday, December 20. Last month, Jazz Central launched a monthly series of Friday night jams led by students dubbed the Young Beasts. On the stage tonight -- The Farmington Quintessential Quintet; The Eau Claire Ice Bergh Combo; and The Will Kjeer Combo, followed by an open jam. Over in St Paul, guitarist/composer Todd Clouser comes back to town to celebrate his latest recording,  The Naked Beat, which does have more of a rock bent than much of his earlier work. He brings his national touring edition of A Love Electric (bassist Aaron Cruz and drummer Hernan Hecht) to the Amsterdam Bar, part of a rockish triple bill.


Friday-Saturday, December 20-21. On their own, both Eric Alexander and David Hazeltine are worthy of SRO in any club, and over time they have found strong support for their gigs at the Artists Quarter. But this weekend they perform together as the countdown to the AQ's closing continues as the final note draws ever closer. With Billy Peterson and Kenny Horst filling out the rhythm section, tenor sax titan Alexander and piano virtuoso Hazeltine make this one of jazz's top "going out of business" gigs.


Saturday, December 21. No one celebrates the holidays with more flair than songbird Maud Hixson. At Bloomington's Schneider Theater, Maude and the Wolverines Trio (Rick Carlson, Steve Pikal and Jendeen Forberg) "Let It Snow" with vintage film clips and carols. Adding to Maud's journey through the holiday songbooks of the 1930-w-50s are rare films from the famed collection of Bob DeFlores.

With a family that knows how to hold a holiday party on stage, singer Patty Peterson finds plenty of support from more Petersons and friends for a "Jam Before Christmas" show at the Dakota. Patty will be joined by sister Linda, brothers Ricky and Paul, and nephew Jason DeLaire, along with usual cohorts Billy Franze, Bobby Vandell, Cory Wong and more.


Sunday, December 22. A few days after his St Paul celebration of Angels, Kings, My Favorite Things, pianist/vocalist/composer Larry McDonough comes to Minneapolis for a reprise at the Icehouse. The new recording is trademark McDonough, with new compositions and arrangements that highlight quirky time signatures, off-beat harmonies and fine ensemble interplay.


Sunday-Monday, December 22-23. Enroute to international acclaim, vocalist/pianist Karrin Allyson stopped in the Twin Cities for a few years to hone her chops.  Recently voted Top Rising Star Female Vocalist by Downbeat, the honor seems a bit late given the acclaim from critics for her dozen or so albums and her four Grammy nominations to date. Well, perhaps you are a rising star until you release a holiday album? Karrin is in town at the Dakota to celebrate her new Yuletide Hideaway, which should confirm her rightful place among the "stars." Joining her will be long-time friend Laura Caviani, who will be on the piano bench --except for those songs on which Karrin chooses to accompany herself. Some all-time favorites will be interspersed with original and seldom-heard tunes.


Monday, December 23. Jazz Central continues its series of interesting artist combinations with "Jake Vs B-3" night. Young trumpeter Jake Baldwin goes head-to-bridge with Tanner Taylor, who tonight shows off his organ chops with some help from drummer Mac Santiago.  Meanwhile, the Icehouse as always on Mondays hosts JT's Jazz Implosion, tonight featuring house favorites, Fat Kid Wednesdays with Mike Lewis, Adam Linz and JT himself. If these two venues seem to have competing agendas tonight, remember Jazz Central begins at least an hour earlier..... and they are not that far apart.


Thursday, December 26. It's the first night of the Bad Plus residency at the Dakota, with the trio's "usual" nights of mayhem offered Thursday through Saturday.  But they will stay around an extra day this visit to reprise their 2012 Rite of Spring next Sunday.


At the Artists Quarter, the Phil Hey Quartet ends a run that began on Jackson Street and continued in the Hamm Building, as they have one last gig at the AQ. For Phil, the November gig was a comeback after illness kept him off the band stand for a couple months this fall, and wow--did he come back! Now it's one more blast for Phil and pals Phil Aaron, Tom Lewis and Dave Hagedorn before the AQ shuts down, and this gig promises to be the most incendiary of the PHQ's long tenure.


Wednesday, December 25. The Steeles at the Dakota


. December 30, New Standards at the Dakota


. January 6-7, Roberta Gambarini at the Dakota


. January 7, Dean Magraw and Davu Seru at the Black Dog


. February15, Koplant No at the Icehouse


. April 10, Delfeayo Marsalis at the Dakota

Posted by Canterjazz at 2:43 AM