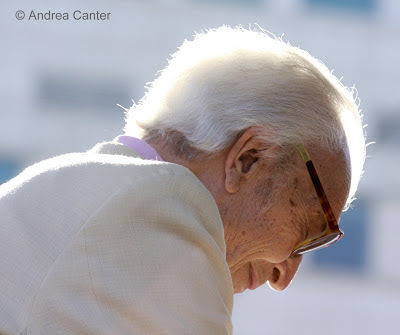 I think my first Dave Brubeck record, purchased in my teens, was Jazz Impressions of New York. It was his classic quartet with Paul Desmond, but was not to be one of his most popular recordings. No matter. It’s the music that got me hooked on Brubeck, and to a large degree, the music that really hooked me on jazz. And maybe his use of odd time signatures trained my ears to appreciate the unexpected in all sorts of music.

I’m not sure when I first saw Brubeck live, probably at Orchestra Hall in the 1980s. But I remember the last time, at the Dakota in late 2009. Dave had just celebrated his 89th birthday and was still touring heavily with his long-standing second generation quartet featuring Bobby Militello on reeds. He was slightly stooped, somewhat unsteady on his feet. But he was a young lion on the piano bench. As soon as he touched the keys, a few decades fell away. And there seemed to be no “time out” for Dave Brubeck as he continued to tour, even playing at the Blue Note in late 2010 shortly following heart surgery for a pace maker.

He defied time in more ways than one.

Posted by Canterjazz at 2:37 PM