Why is it that, having found a perfect quote, I can never find it again when I want to quote it myself? Sitting on a plane recently, reading (laboriously) through The Rise of a Jazz Art World by Paul Lopes, I found what feels like the perfect –if really inaccurate—phrase to describe jazz, particularly for those hearing it for the first time: “an enthusiastically disorganized music.” The source was referring to his impressions of jazz of the 1920s and 30s, and differences between white and black bands of the era. But something about the concept of “enthusiastically disorganized” appealed to me, at this moment, as a perfect summation of my own experience as an uneducated improviser a few hours earlier.

Briefly, my own experience performing music came between the ages of 9 and 14 when I took classical piano lessons. I was good enough to last five years, not good enough to please myself or be convinced that more skill would come if I stuck with it. Probably I was wrong about that. And maybe if my lessons had included some jazz and improvisation, I would have at least pleased myself. In my mid 20s, I even bought a piano with the idea that I would finally get serious about personal enjoyment. I sold it a few years later after merely watching it gather dust. 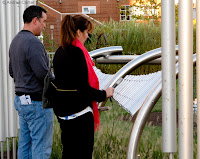 Fast forward nearly 4 decades. I happened to be in Baltimore for a one-day conference, held adjacent to the Inner Harbor area and the tourist-centric Harbor Place where I enjoyed the well-designed spaces, walkways, and juxtaposition of old and new.  Along the path connecting street and harbor is a modern building that houses some research entities affiliated with the University of Maryland, and a public space named Pierce Park. It’s not so much a park as a large rustic garden space with a walk lined with vertical metal pipes that resemble chimes rather than a traditional fence. The chain of chimes ends with the real thing: Several sets of vertical and angled tubular chimes, some as tall as 8 feet and maybe 5-6 inches in diameter, the smallest set aligned horizontally like a slightly raised vibraphone. At the base of each set of chimes was a bucket containing mallets. It was an open invitation to create a do-it-yourself musical moment.  Young children with parents, couples out for a stroll, who ever passed by could not resist the temptation to be a musician in the moment. 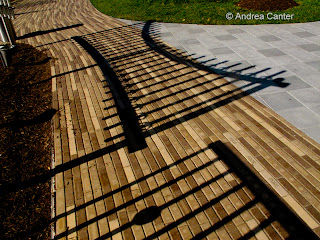 And I was not about to pass up the opportunity. I came back to Pierce Park several times over my two-day visit. Of course, when I hear Gary Burton or Stefon Harris or Dave Hagedorn, I know I am hearing musicians who have studied the art and science of percussion and who not only understand how to create the variety of sounds of their instrument but understand the art of improvisation. Fifteen minutes in Pierce Park did not make me a musician. But briefly, I felt like an improviser. After all, if you really don’t know what you’re doing, you have to make it up. I picked up a pair of mallets and started attacking those tubes, gently, aggressively, slowly, recklessly. I could drag a mallet and create a zigzag cascade of long-sustaining notes. I made up little melodies, hitting the high and low extremes, doubling notes, inventing chords. Everything I needed to know (at the moment), I did learn in kindergarten.

Enthusiastic disorganized music. Just call me Mallet Girl. (Anyone know where I can buy one of these things?)

By some odd twist of fate, whatever I learned in kindergarten, I learned in Baltimore, where I started those piano lessons a few years later, before we moved to the Midwest.  Of course that was years before there was such a thing as Harbor Place.
Posted by Canterjazz at 10:40 PM