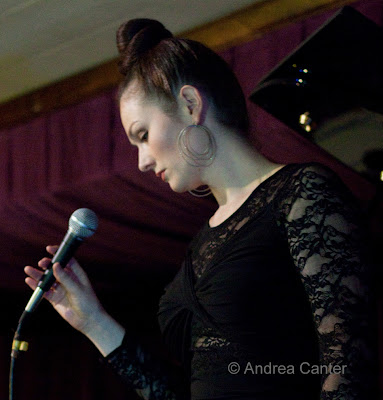 When I first met vocalist Nancy Harms in about 2005, she was just breaking into the Twin Cities Jazz scene after a few years teaching music in Milaca, MN, not far removed from her childhood in Clara City, MN or her college days at Concordia in Moorhead. Now in an urban environment with a vibrant jazz community, she quickly grew in both skill and confidence, and by 2009 she had a debut recording (In the Indigo) that could easily pass for a third or fourth effort, filled with hints of a future filled with singular interpretations and new inventions. A few weeks visiting New York and she knew she had to leave the Minni-apple for the bigger fruits of Jazz Mecca. She was young enough, sufficiently unencumbered, and wise enough to recognize what she could lose leaving the smaller pond, and what she could gain in more challenging, more diverse surroundings. We almost have everything an artist could want in the Twin Cities. Almost. Vocal musicians seeking to stretch the creative envelope have few role models relative to instrumental artists, at least within the even loosely defined arena of jazz. Nancy was still fond of standards and swing. But she heard other approaches and needed more.

Two years later, Nancy Harms is starting to receive recognition for that exploratory spirit that has been driving her forward, compelling her to seek out master classes, to sit in every chance she gets, to interact with a diverse array of both young and veteran musicians. She came to the Dakota this spring with one of her new projects, Double Bass, Double Voice, an unlikely combination of two vocalists (Nancy and Emily Braden) and an acoustic bassist (Steve Whipple); the harmonies were as unique as the whole idea of it, regardless of the tunes to which their experiments were applied.  Simultaneously, she has been working with one of the most creative young pianists on the New York scene, Jeremy Siskind, now in a fascinating trio with another young hotshot, saxophonist/clarinetist Lucas Pino. Lucas too has Minnesota connections, having played with South High alums Chris Smith and Javi Santiago at the Brubeck Institute.

Siskind’s new project, Finger Songwriter, melds his graduate work in Comparative Literature and his Eastman School of Music education in jazz theory and performance. Setting poetry and prose texts to new compositions, Siskind sought just the right voices, finding them in Harms and Pino. Following their official CD release at the Cornelia Street Café in the Village, the trio hit the road for a short tour, landing at Jazz Central last weekend for their Twin Cities debut. Perhaps the very intimate space of Jazz Central was the most perfect setting for music that seems to defy all boundaries while remaining totally accessible, totally engaging.

Putting piano and saxophone together in duo is increasingly popular, with some favorite pairings including the late James Williams and Bobby Watson, the late Hank Jones and Joe Lovano, George Cables and the late Frank Morgan, Joey Caldarazzo and Branford Marsalis. Adding the human voice brings more than a new timbre; it doubles the beauty and the artistic reach of the horn. At least that is the result with Finger Songwriter. Listening to the recording, there are many moments when the ear (at least, this ear) can not distinguish lingering notes from Pino versus Harms. Adding the visual element of live performance, I was startled to find myself in the same zone of uncertainty—what is the source of that note? Most in sync with Lucas on clarinet, there were moments at Jazz Central where those two voices became one instrument to play against the often obtuse, always melodic wanderings of Jeremy’s piano.

A few familiar standards snuck into the set list that largely covered compositions from their recording. Siskind one minute suggests the subdued lyricism of Fred Hersch, only to turn around and hint at the bluesy side of Keith Jarrett or the abstract swing of Jason Moran.  Pino, who started on sax before adding clarinet to his arsenal, is a master of both, but I predict his glorious clarinet will be his ultimate weapon. And who would have recognized his experience on bass clarinet was limited to a few months?

Nancy couldn’t finish the evening without a run at “Bye Bye Blackbird,” which has become her signature. But it is an ever-changing signature. Even back on In the Indigo, she was taking significant liberties with rhythm and melody; one can trace her trajectory by lining up subsequent versions, each new presentation more fascinating than the last—a change-up in phrasing that alters the essence of the storyline, a melodic variation or a note clipped or extended that changes the mood, a shift in tempo that wakes up the ear. Like a painter mixing a new palette before starting the next canvas, Nancy takes “Blackbird” – and everything else that crosses her path—and adds a new drop of color, changes the direction of her brush strokes, alters the texture of the surface, continuously creating new images. Her growth is apparent in the company she keeps, in the artists who bring her to their projects… in every new performance of “Blackbird.”

It was great to have her back in Minnesota. But she belongs in New York. At least for now. Maybe one day she will return and be that role model for young and restless vocalists here.
Posted by Canterjazz at 12:55 PM