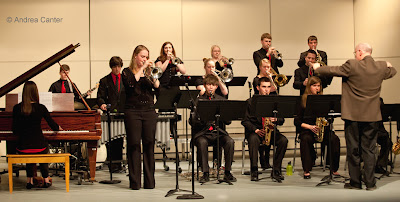 In the past week I’ve had the opportunity to hear jazz in various forms from diverse sources performed by a wide range of artists in diverse contexts. That’s not an unusual experience in this community in this genre. But in the past week, I enjoyed music that “uncommon” to a significant degree—uncommonly performed, uncommonly interpreted, and to some extent, in uncommon spaces.

The Roseville Area High School Spring Jazz Concert (May 18) seemed like the most unlikely opportunity to hear music that quite possibly has not been performed in nearly 20 years, and most likely not performed by a high school ensemble, ever. But jazz director Pat Moriarty is as rare as the charts he gathered over the past year, charts—or rather, chart fragments and notes and tedious transcriptions—from the recordings of the Dedication Orchestra, a band assembled in the early 1990s to pay tribute to the music of expatriate South African jazzmen of the 70s, notably Chris McGregor, Dudu Pukwana, Mongesi Feza, and Harry Miller. 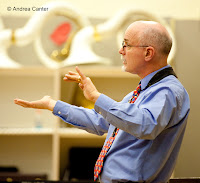 Pat ultimately connected with the head of Ogun Records which released the two Dedication Orchestra recordings in 1992 and 1994.  Charts were reassembled on both sides of the Atlantic—via Ogun in London, and via student musicians in Roseville. (Read more about this venture on Jazz Police.) Six of these compositions were performed by Jazz Ensemble I in the jam-packed RAHS Auditorium, featuring a rotating cast of exemplary teen soloists. I hope someone recorded it. The concert also included performances by Jazz Ensemble II and two combos, including yet another uncommon work—a nine-part tone poem by senior saxophonist Alex Charland, complete with an extensive program note. The explanatory text was Shakespearean, the music straight out of the 21st century.

Throughout their 2011-2012 season,  Jazz @St. Barney’s has presented monthly programs of jazz vocalists and instrumentalists in the large hall of the St. Barnabus Lutheran Church Art Center in Plymouth. They’ve hosted some of the best in town (and beyond), including vocalists Maud Hixson, Connie Evingson, Judi Donaghy, Paula Lammers and Bruce Henry, and the piano/guitar duo of Laura Caviani and Joan Griffith. For the season finale, vocalist Rhonda Laurie, with backing from pianist Phil Mattson and bassist Josh Granowski, presented “Uncommon Standards,” a showcase of songs, often by well known composers (the Gershwins, Duke Ellington, Thelonious Monk), that are either seldom performed or seldom performed with lyrics. 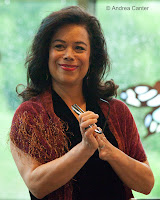 So there were no renditions of “Embraceable You” or “Take the A Train.” Rather, we heard Blossom Dearie’s quirky and Frishberg-ish “I’m Shadowing You”;  we learned there are lyrics to Dizzy Gillespie’s “Con Alma” and Monk’s “Ruby My Dear”; and we enjoyed a Gershwin and Gershwin tune that, for some reason, just isn’t on most set lists, “Aren’t You Kinda Glad We Did?” (Maybe it is just too risqué for the image of the Gershwins!) The set worked, not only because of the musicianship, which was impeccable, but because we got a little history, a little back story, from Rhonda, a determined researcher as well as musician, including her still-in-progress effort to contact the lyricist of “Ruby My Dear.” (Anyone know how to reach Sally Swisher?)

It’s not uncommon in the Twin Cities for young musicians to grab gigs at prime venues like the Dakota and Artists Quarter. But when musicians in their early 20s have already been playing together for ten years, when they get back to back books at the top jazz venues in town… that’s not business as usual. Back when they were barely in middle school, Javier Santiago, Chris Smith and Miguel Hurtado formed the rhythm section of a student band, The Eggz. Over their teen years, the guys played together in Tom Wells’ middle school jazz band at Ramsey Fine Arts, then under Scott Carter at South High and in other configurations outside of school. Javi and Chris went on to the Brubeck Institute, then New School for Jazz and Contemporary Music in New York, while Miguel also landed in New York at the Manhattan School of Music. They all completed their college degrees and are making their way into the jazz scenes, Javi and Chris in New York, Miguel in the Twin Cities.  With Javi and Chris “home” to visit family this week, the guys came together at the Artists Quarter (May 24th); the trio plays Late Night at the Dakota tonight (May 25th) and kicks off the Young Lions Showcase (joined by saxophonist Nelson Devereaux) Saturday at the Studio Z.  Each a highly skilled musician in his own right, as a trio these guys exhibited a chemistry and mutual joy that comes from years of collaboration, be it on savvy original compositions,  a simultaneously subtle and exaggerated interpretation of “St. Thomas” a multi-textured run through “I Hear a Rhapsody” or an elegant reading of “Monk’s Mood.” Common standards, perhaps, but uncommonly interpreted. And these young musicians drew an unusually large audience for a Thursday night.

Music, new, old, and reinvented is the common fare at the Artists Quarter, night after night. But I don’t think we sufficiently appreciate it, and the weeknight audience is often disproportionately sparse relative to the degree of talent on the bandstand. I am seriously guilty myself. When did I last come down midweek to hear the Dave Karr Quartet? Dave is one of our local art treasures. He can play anything with a reed as well as flute. And he can play any tune called and call some that might stymie his cohorts. His cohorts at the AQ typically include Chris Lomheim, Billy Peterson and Kenny Horst. It’s not a pick up band, and it’s not your typical house band. Don’t be fooled by the $5 cover. Their music is priceless. The set list might be bebop standards or songbook ballads, or a tune like Cole Porter’s “I Love You” that’s familiar yet not played often. It’s not so much the songs that make Dave’s music uncommon. It’s Dave’s music that makes the songs unforgettable.

Posted by Canterjazz at 8:37 PM