Here's to Life... and Irv Williams 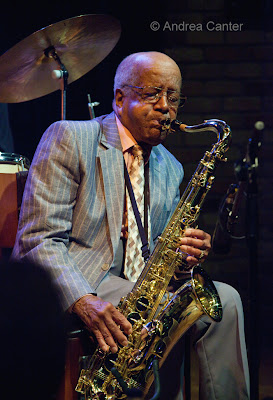 These days, a conversation with 92-year-old Irv Williams might go something like this: “Hey Irv, are you really retiring?” “Who said retire? I just said I’m tired!” The only thing quicker than his wit is Irv’s musical mind, which has been entertaining Twin Citians since the U.S. Navy brought the Cincinnati native here as a sax and clarinet player during Word War II. During his 80s, when most would truly retire from any physically taxing activity, Irv seemed to rev up his career, releasing one glorious CD after another, each of which was dubbed “my final recording.” He even titled one Finality. Then came another. Lovingly referred to as Mr. Smooth for his lush tone and style on tenor sax, Irv celebrated 90 and kept going, often on the Dakota bandstand for Friday night Happy Hour with long-time duo partner Peter Schimke. Last spring, he released Duke’s Mixture at a celebration at the Dakota described as his “Retirement Party.” Last night, he headed a quartet at… his Retirement Party, again at the Dakota. 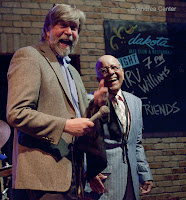 Is this for real this time? Irv has overcome a range of health problems in the past 20 years… or rather he has worked around them, inspite of them, or maybe even because of life’s challenges.  I chatted with him before the gig began last night. “So, are you really retiring?” “Oh, I think I might have a comeback in a few weeks,” he smiled.  “Would that be your longest retirement yet?” He could only laugh. And then he began to blow, as sweetly as ever, in the company of Schimke, Billy Peterson and Gary Gauger. They started with “I Hear a Rhapsody” and “Alone Together,” moved south of the border with “Gentle Rain,” bopped along with “East of the Sun/West of the Moon,” Irv never missing a cadenza, a soulful phrase, or a fast articulation. He must have been pacing himself, starting the second set with “Tumbling Tumbleweeds,” “You Don’t Know What Love Is,” and “In a Mellow Tone” (which of course could be his theme song) before vocalist Tommy Tipton came on stage to salute Irv with a heartfelt, seemingly final song, “Wonderful World.” 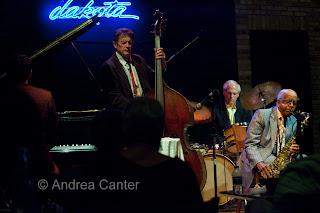 But Irv was not done with this set, moving into “Softly As In a Morning Sunrise,” giving bassist and longtime friend Billy Peterson plenty of room to stop the house chatter with an extended solo. (The old adage that you can tell when it’s the bass solo because everyone starts talking seems to hit a brick wall when Billy launches a solo.) When the quartet started  an emotive “Here’s to Life,” I’m sure many of us figured this was a perfect ending to the evening. Irv thought otherwise. He next called a blues, then announced the band was taking a short break before returning for a third set.

I guess he will retire when he stops playing. 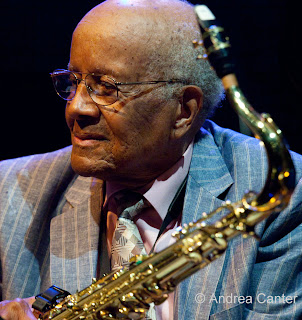 Posted by Canterjazz at 3:42 PM