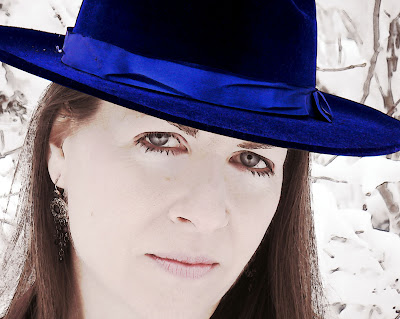 “Composition is a puzzle,” says Ann Millikan, whose eclectic musical works have been described as “tonally challenging yet emotionally involving" (Joseph Woodard, LA Times). A native Californian who started out studying jazz piano and voice, as well as Brazilian and African music, Millikan turned to composition when she “woke up one morning in 1988, hearing this orchestral music in my head—for mezzo-soprano solo, choir and orchestra.” Experiencing the “limit of my ability to decipher and notate the complex music I was hearing,” she enrolled in the MFA program at California Institute of Arts, where she worked with Mel Powell, Morton Subotnick, and Stephen L. Mosko.  And while her early emphasis on improvisation yielded to the necessities of through-composition in the (primarily) classical world,  that background in jazz nevertheless informs her numerous works, commissions and grants for orchestra, chamber ensembles, choirs, and experimental and interdisciplinary projects. Her latest project tackles the story of St. Paul’s historic “Swede Hollow,” an opera that will have its world premiere this Saturday, June 2nd… in Swede Hollow Park, of course, as the culminating event of Art in the Hollow. 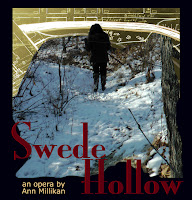 Armed with a Minnesota State Arts Board Arts Initiative Grant, Ann chose her neighborhood of Swede Hollow as the subject for her one-act opera, and went to work on the music and libretto, “researching that history and creating fictionalized characters based on the research,” in part based on interviews with former residents. Following the lives of Swedish, Italian and Mexican immigrants over the community’s 100 years, the opera appropriately premieres on the site of the stories that inspired the music, which is scored for professional chamber orchestra and four vocal soloists. This performance is directed by Scotty Reynolds, and features members of the Mankato Symphony Orchestra and soloists Rachel Wandrei, soprano; Meredith Cain-Nielsen, mezzo-soprano; Brad Bradshaw, tenor; and Stephen Mumbert, baritone. (Details on Ann’s website!)

Where Improvisation Meets Through-Composition
If Millikan’s route into the world of modern classical composition was a bit meandering, so were her initial encounters with jazz.  “I came to jazz through a circuitous route through Brazilian music,” she explains. “When I was 14, my brother moved to Brazil. And he came back with all of these records. I would listen to them and learn the songs…. The advanced harmonies captivated me, and that’s what led me into jazz.” The interest in Brazilian music ultimately led Ann to Brazil, where she observed the destruction of natural and human resources along the Xingu River caused by the Belo Monte Dam. Her response came out in film and music. "XINGU" premiered this past winter at an American Composers Forum Salon at Studio Z in St. Paul, a project that is available on Vimeo and YouTube

Her diverse musical background results in music that is difficult to label. Stephen Eddins (All About Music) noted that her music is “characterized by high energy and a quirky inventiveness that defies easy categorization.” But Millikan notes that “the all-encompassing classical category is what I do. I also write some experimental music [e.g. “House of Mirrors”]. But I am really eclectic in terms of these influences – the Morton Feldman influence is huge in terms of how I think about texture, how he orchestrates– the way I layer [texture] comes from a real in-depth study of his music…My music is through-composed; everything on my CDs is written down. (With the exception of one drum solo!) But you can hear [jazz background] in my harmonic knowledge, the way I write rhythm—that’s how I hear, there’s the influence of jazz and also Brazilian music.”

What about that early work in improvisation? Says Ann, “When I went back to grad school [Cal Arts], my instinct was to incorporate improvisation into some of the music I was writing.  But I remember my teacher saying, ‘If you know what you want, it’s best to write it down.’ …Classical players are a lot less comfortable with improvisation and you often get less than satisfactory results. So I moved farther and father away from [improvisation]... With ‘House of Mirrors’ that was different because it wasn’t totally through-composed, but not fully improvised, somewhere in-between.  Each person that was part of that project had a different background – straight jazz players, straight classical players. The classical musicians wanted to interpret what was on the page, not create, so it was a challenge. And the jazz players just want the melody or something to run with. Everyone had a different way of dealing with improvisation and that is what made the project such fun.”

Does her background in improvisation have a positive impact on her through-composed music? “It depends,” notes Ann. “On ‘Ballad Nocturne’ [title track of her 2010 recording on Innova], a piece I wrote for an Italian pianist [Emanuele Arciuli], I wanted to create something in-between a jazz ballad and a nocturne—where those two worlds met. It’s all through-composed, but I tried to develop the music as an improviser would. So it sounds organic, the way an improviser would build a solo.  As I develop material –that’s really what composition is – I’m coming up with an idea and doing something with it.  The composer is the improviser in that sense.”

And does it work the other way around? Does the foundation of classical composition inform improvisation? “Composition is a puzzle,”’ says Millikan. “What are you going to do with your material?  As a jazz composer, you are trying to write something that is full of possibilities– great chord changes, a really interesting melody, great rhythmic feel, something that people are going to run with. The impetus is to create something that is fruitful. As a classical composer, what I try to do is develop my material in a satisfying way – the way I build material, and the way I think about it, comes from that organic process…I know classical composers who try to dabble in jazz  and write for jazz musicians. And to me it sounds stiff, it doesn’t quite work. I think it works better to have a person coming out of jazz writing classical music than the other way around.”

“…You have to be thorough and write everything down [in classical music]—you need to know how you want it phrased, where you want the emphasis on that one note, where you want it to swell, what dynamic you want. Every articulation, every bowing. The clearer you are on paper, the better result you will get…You have to hear it in your head.  That’s what you are doing as a classical composer--you need to provide all the information possible… and then the performers make it work. As a [classical] composer, you are not directing it – you are usually in the wings.  In a jazz context, it is more democratic. .. and it’s about the playing, you are living in it, you are not trying to get it perfect. You are discovering it, whereas classical music is all about perfection.”

The pursuit of perfection in the context of discovery? It’s where jazz and classical music meet. At Ann Millikan’s doorstep.

“Swede Hollow” will be performed at 4 pm in Swede Hollow Park; main entry near Hope Community Academy at 720 Payne Ave. Follow signs “down the rabbit hole” into Swede Hollow Park. Art in the Hollow begins at 10 am. All events free!