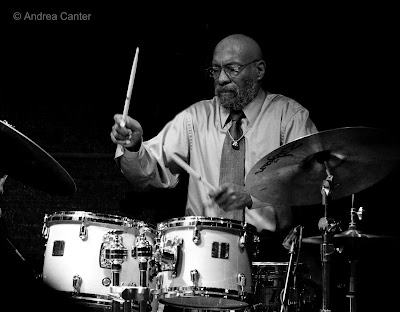 Seems out of season but this week we find out who’s been naughty or nice (at least in song), hear from one of the true living legends of jazz drumming, salute New Orleans, take a journey through Afro-Peruvian culture, and enjoy one of the masters of the mighty bari sax going head to head with stars of tomorrow. 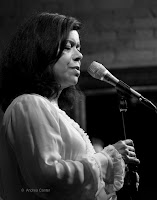 April 6. “Naughty Songs for Nice Girls” finds local singers Rhonda Laurie and Bobbi Miller digging into the “delicious double entendre, innocuous innuendo and subtle sass” of popular songs, …from Mae West to Dinah Washington, Marlene Dietrich to Marilyn Monroe.”  In the theater at Bryant Lake Bowl, this is the first of two Friday nights of stories and songs inspired by “nice girls who loved being a little naughty.”

Nice guys getting a little naughty at Studio Z? Friday evening in St. Paul finds Todd Clouser back in town  after a brief respite in his Baja, Mexico home. He’ll bring the edgy Love Electric band to the stage in tandem with master improviser Tim O’Keefe and his percussion ensemble, Batucada do Norte. Sounds like a lot of naughty mayhem! (Clouser turns up again at Café Maude with some impressive cohorts named Weinbeck and Johnson on Tuesday, 4/10.)

April 6-7. As drummer for Weather Report, Eric Kamau Gravatt drew serious praise from Wayne Shorter. And as drummer for McCoy Tyner, Gravatt has enjoyed a gig spanning the decades. Home in the Twin Cities, his band Source Code has undergone a series of transformation, with the latest edition sporting pianist Gene Rush, vibes man Dave Hagedorn, and bassist Ron Evaniuk. Always an exhibition of volcanic propulsion and nonstop thrills. 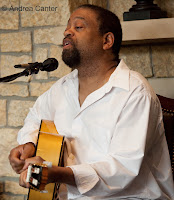 April 7. If you are looking for something more relaxing for your Saturday night, how about a west suburban coffee house with a tropical-influenced duo? Prolific composer with a Brazilian bent, guitarist/vocalist John Penny has been bringing folks into Munkabeans in downtown Hopkins, and his frequently cohort is percussionist/conguero Rey Rivera.

April 10. Some have compared Peña to the Buena Vista Social Club but that might be a cultural transgression. Peña, headed by young guitarist Cory Wong and cajón specialist Chico Chavez, is all about Afro-Peruvian culture and the magic of the cajón, the box that serves as the percussive center of the ensemble. What started out as merely a trip to Peru grew into band that brings the music of  Peru’s 16th and 17th century African slaves into the modern era. On the TCJS Jazz From J to Z series, this night at Southwest High School, the band includes Chavez (cajón), Eric Foss (percussion), Andy Schuster (bass), Wong and Chris Olson (guitars), and Gloria Rivera and Geraldine Jerez (vocals). Special treat—a short opening set from the exemplary Southwest Jazz Ensemble. Students will be coming off an afternoon clinic with Peña artists.

In St. Paul at the Artists Quarter, the little big band ensemble from McNally Smith College of Music, the X-Tet (not surprisingly led by Pete Whitman) will perform with the acclaimed bari saxophonist Gary Smulyan, who has been in town conducting clinics at the college. A four-time winner of the DownBeat Readers Poll, he’s also topped the Jazz Journalists Association Award for Baritone Saxophonist of the Year and is a five-time Grammy Award winner for his work with B.B. King, Joe Lovano, Dave Holland, and the Vanguard Jazz Orchestra. Check out his latest release, Smul's Paradise. Better yet, check him out live at the AQ!

More Jazz, All Week
Where can you find live jazz? Everywhere. Visit the live jazz calendar managed by Pamela at Bebopified; you will also find it linked from the Jazz Police Twin Cities page. 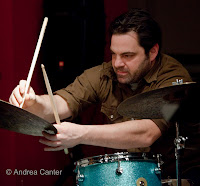