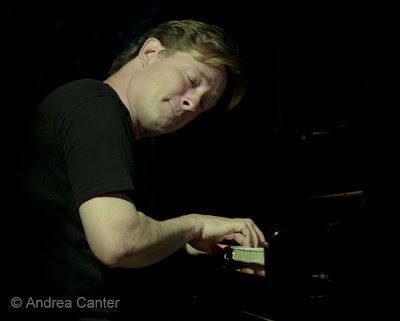 It’s Friday the 13th! But it’s really a lucky day. While all of April has been designated Jazz Appreciation Month, April 13th is particularly singled out as Jazz Day in the U.S. (Stay tuned to April 30th as International Jazz Day, thanks to UNESCO!)  While I like to think every day is Jazz Day, maybe we can all do something extra special for the music today. And there’s no shortage of jazz to enjoy, today or this weekend or throughout the coming week. So dust off your horn and blow a riff; come out to hear music at a favorite or a new venue; tell a friend about some very cool jazz in the neighborhood; check out all the jazz blogs posted today and throughout the month, courtesy of the Jazz Journalists Association first “blogathon.” And give the musicians who keep the music alive some… and some more.

April 13 (Jazz Day!) Some months ago I heard pianist Bryan Nichols and guitarist Dean Magraw play a duo gig at Café Maude. Now they’re sharing the similarly intimate space at the Black Dog, but probably for a more serious audience where the focus is really on the music. On their respective instruments and beyond, you won’t find two more creative improvisers. Hats off to curators Nathan Hanson and Brian Roessler for continuing to bring such interesting collaborations to their Community Pool – Deep End series at this Lowertown diamond-in-the-rough.

Last Friday night I enjoyed a “girls night out” at the opening of “Naughty Songs for Nice Girls,” a delightful revue assembled and performed by local singers Rhonda Laurie and Bobbi Miller with perfect backing from guitarist Robert Bell and bassist Josh Granowski. Bryant Lake Bowl can be a challenging venue—walking through the din of the diner and the vibrations of the bowling alley to reach the theater door, but once inside, it seems like a great fit for a bit of burlesque with your cappuccino or draft. The songs are either just a bit naughty or a big bit suggestive. Depends on your own degree of naughtiness, I think. The voices are well suited for a bit of flirtation. This second and final show is a great end to the week at 10 pm.

April 13-14. It’s always a holiday when Bill Carrothers comes “home” to the Artists Quarter. When he’s not on tour in Europe he is most likely at home in the wilds of Michigan’s U.P. or maybe at Chicago’s Green Mill, so we need to get out and enjoy every note when we can. After two sensational recordings last year –the solo Excelsior and the trio Live at the Village Vanguard, Bill is set to release another solo set, this time mostly composed in the studio, and as personal a project as anything he has ever done. Dubbed Family Life, the recording (out next week) brings us along on Bill’s own journeys and his musings about his family and rural surroundings, giving us some of his most elegant music yet. The Artists Quarter gig is a trio with Billy Peterson and Kenny Horst, but maybe we can catch some of the new solo pieces as well?

April 14. French bass innovator Francois Rabbath—who can not be pigeon-holed as a jazz, classical or world music artist but merely all of the above—has been in town for a couple days, hosting master classes and clinics at McNally Smith and MacPhail. Tonight he performs solo in Antonello Hall (MacPhail Center for Music). I expect this to be one of those rare evenings that defies description before or after the fact. If you like the acoustic bass, this will be an adventure unlike any other. He wraps up the weekend Sunday with another master class and reception at McNally Smith. 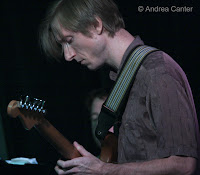 Strings of another sort are on display at Jazz Central when Parker Paisley, a modern jazz quartet led by guitarist Park Evans, holds its CD release Party. With ample support from Brandon Wozniak, Adam Wozniak and Pete Hennig, Evans’ new recording features all original compositions and covers a diversity of moods; this is a sophisticated ensemble that we don’t hear often enough in good listening environments.

April 15. Better get your taxes done early in the day.  Action on both sides of the river tonight! At Landmark Center, PipJazz Sundays continues with boss vocalist Pippi Ardennia mixing it up with trumpeter Solomon Parham and student guest trumpeter Alex Grothe. Parham is somewhat under the radar but hopefully not for long. PipJazz, now a foundation to promote jazz opportunities for youth, is seeking sponsors in order to give away tickets for 12-18 year-olds. Let’s hope they fill up the auditorium! Also tonight, New York-based saxophonist (and mouthpiece renovator) Adam Niewood comes back to join old friend Adam Linz as guest artist in MacPhail’s latest Spotlight Series concert, tonight featuring the Dakota Combo student ensemble in a set with Niewood, followed by the MacPhail Jazz Faculty ensemble, also featuring Niewood. Early in the day, both Adams will be on hand for the MacPhail Combo Festival.

April 16 & 18. Accordionist Denny Malmberg is in New Orleans and Charmin Michelle had no trouble finding a “sub” at Fireside Pizza—she tapped frequent partner Joel Shapira, so we have two nights of pizza, pasta and Charmin & Shapira. Voice and guitar, as good as it gets. So is the flat crust. (The pair turn up on Thursday at Hell’s Kitchen.)

April 19. Great voices tonight that we don’t hear enough with good sound systems. At the Dakota, it’s the Jana Nyberg Group, headed by music educator/jazz/pop/blues singer Jana and a songbook that runs the gamut from Peggy Lee to Bonnie Raitt. In St. Paul, Tommy Bruce holds attention at The Lexington as the twice weekly jazz nights continue. Tommy came into his vocal talents relatively late, but as a result he has plenty of life experience to back up his rich tenor. And if you just feel like sitting back and watching a good move, REEL Jazz closes out its season at the Trylon Microcinema with footage of Louis Armstrong and more, courtesy of our local jazz film czar, Bob DeFlores. (Details on the KBEM website.)

More Jazz in Town!
The Jazz Journalists Association is pushing the theme of “community” for Jazz Appreciation Month, meaning get out and support jazz close to home. And in the Twin Cities, it’s easy to find, every night. Just check Pamela’s Live Jazz calendar or view it on Jazz Police. 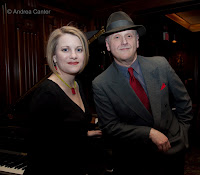 ·         Sunday, April 15: Patty and the Buttons, brunch at the Aster Café; “Sinatra Nice and Easy” with Jason Richards and the Rick Carlson Trio at the Capri; Zacc Harris Trio at the Riverview Wine Bar

Posted by Canterjazz at 1:56 AM