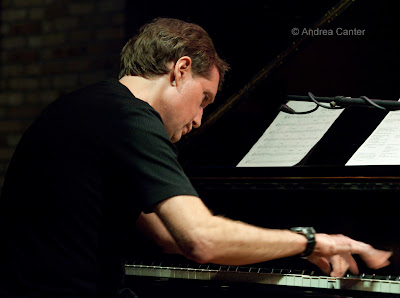 Legal Aid attorney Larry McDonough has a long history of supporting those who most need it, and can least afford it. That social activism carries over to his music. Larry not only rearranges standards and modern hits, often in odd time signatures, he has also been involved in a project that turns children with disabilities into composers. Through the creative hardware and software applications of the Fingersteps Project, McDonough has used student melodies as a launching pad for fully formed jazz works, some of which he has recorded and which he performed at the celebration of his Baby Blue Arts DVD at the Dakota (April 5th). He now has seven such compositions, the first of which he recorded on his quartet’s Simple Gifts, and a few of which will be on his next recording project, a duet with saxophonist/poet Richard Terrill dubbed Solitude.