Jazz Images of Leigh Kamman: May the Stories Never End 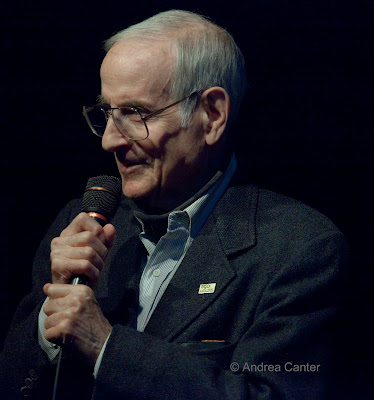 For the second year, KBEM Radio has partnered with Minneapolis Community Education to present one-session classes on jazz, hosted by Jazz 88 personalities. I enjoyed a few of these sessions last year, and was interested in the follow-ups offered for spring 2012. So I jumped at the chance to spend an evening listening to Leigh Kamman in a classroom at South High. Who wouldn’t? The jazz airwaves just have not been the same since he retired from 40 years hosting The Jazz Image on National Public Radio, broadcast locally via MPR. Actually MPR has not been the same to jazz fans since Kamman retired. Even NPR’s syndicated jazz programs like Piano Jazz are not found on MPR—you have to tune into KBEM.

It’s now been nearly five years since Kamman tuned out of The Jazz Image, but he’s not exactly been silent, speaking at special events and working on organizing his broadcast archives. His “class” last night was really a two-part interview, the first hour featuring Steve Blons (guitarist and cohost of Jazz and the Spirit) presenting Leigh with pithy questions about some of the high points of his career and playing several fascinating excerpts of interviews dating far back into Kamman’s broadcast history, well before The Jazz Image. For the second part of the class, questions from the audience prompted Leigh’s storytelling and evaluation of the jazz scene. In short, the tables were turned, and it was Leigh Kamman who was the subject of the interview. But there was never any doubt who was directing the evening!

The audio excerpts were priceless: Duke Ellington describing jazz as “Americans taking liberties with sound”; Dizzy Gillespie explaining how he came to name his autobiography To Be or Not to Bop; and a static-filled phone interview with Charlie Parker a few months before his death, listing the music he recommended to listeners—Bartok and Stravinsky. Leigh noted his own recommendations and pleasures—the new book about Twin Cities jazz, Joined at the Hip by Jay Goetting, and the music of Minnesota native Maria Schneider, 92-year-old saxman Irv Williams, and Kamman's ex-wife, singer Patty McGovern.

Spending any time at the knee of Leigh Kamman is a pleasure. He’s spent time with many of the icons who shaped jazz from Swing to Avant Garde, the greatest musical storytellers. And he’s one of them.


Photo: Leigh Kamman at the book signing for Joined at the Hip, May 2011. (Photo by Andrea Canter)
Posted by Canterjazz at 4:33 PM