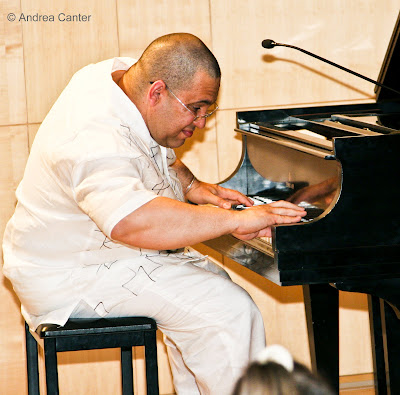 © Andrea Canter
The first time I saw pianist Nachito Herrera was probably in 2003 or 2004, not long after he landed in the Land of Ten Thousand Lakes after defecting from his native Cuba. His hands moved faster than my eyes could follow, his enthusiasm flowed through every finger. Soon the traditions of rhumba and cha cha became as familiar to Twin Cities audiences as polka and swing.

Nachito Herrera has been named one of three recipients of the 2012 American Heritage Award, the highest honor granted by the American Immigration Council. The award will be presented at the American Immigration Lawyers Association Convention in Nashville on June 15th. Past winners of this award have included a Nobel Prize winner and a Chair of the Joint Chiefs of Staff. Few musicians have received this honor--the last was Carlos Santana.

Nachito plays nearly monthly at the Dakota. And while every gig is a big party, maybe the next one should be in his honor?

Congratulations to one of our favorite “adopted” Minnesotans!

Photo: One of my favorites of Nachito, from a performance at the Minneapolis Public Library in 2007.
Posted by Canterjazz at 2:42 PM