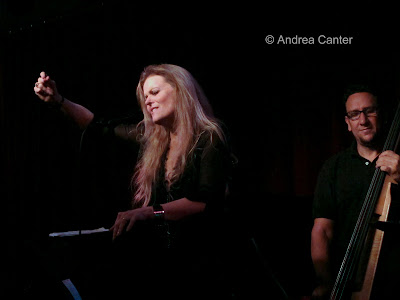 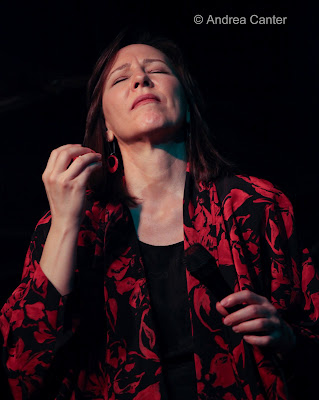 It feels like time is compressed whenever I am in New York, maybe because I try to fit so much into a few days. And that just mirrors Manhattan—so much of the world squeezed onto that one relatively small island. I learned on my last visit to make that first night the long one; fatigue is cumulative at my age.

I picked four gigs for various reasons—Janice Friedman Trio at The Kitano, because I have been wanting to catch her live since first hearing her on CD about five years ago and then live with Judi Silvano at the last IAJE; Tierney Sutton at Birdland because… it’s Birdland and I have always enjoyed her live performances (at the Dakota and Detroit Jazz Festival), and of course there is that 2012 Grammy nomination; Kendra Shank at 55 Bar, because I have never been in New York at the right time to catch her monthly quartet gig and also wanted to check out 55 Bar; and Billy Childs at Jazz Standard, because I have never heard Billy live, I am quite fond of his bandmates (Steve Wilson, Hans Glawischnig and Eric Harland), and I like the barbecue at Jazz Standard.

I started my rounds (1/26) at The Kitano, a boutique hotel in Midtown with a Japanese restaurant/lounge housing one of the smaller jazz clubs in New York. Maybe it holds 50 including the bar? Janice Friedman has a loyal following and the club was packed tight, the trio crammed into a corner where the grand piano barely fit, where bassist Ed Howard was nearly against the window sill and drummer Willard Dyson almost sitting on the snare. But the advantages of intimate spaces far outweigh the lack of elbow room, perfect sound wherever you sit (or stand), and I was about 5 feet from the keyboard. Watching her fingers fly, it was easy to forget that Friedman recently developed some physical difficulties that seriously limit the use of two fingers on her left hand—the other digits apparently take over as needed. Tops for me was her interpretation of Paul Simon’s “Bridge Over Troubled Water,” which became Latin swing and then African folktale. Maybe there is more in the Paul Simon book that jazz artists should consider.

It was early enough and warm enough to just walk across Times Square to Birdland and my Big Apple encounter with the Tierney Sutton Band. Sightlines are good from just about anywhere and the sound always on par with the talent. And Tierney? She was pitch-perfect, relaxed, funny, fully engaged with the band, the audience, the music. She assured some hold-overs from the first set that they never do the same set twice—she meant in general, not just on a given night. Thus they did only a couple tunes from the new, Grammy nominated American Road-- the achingly beautiful “Amazing Grace,” with Sutton scatting with just bassist Kevin Axt, and the Grammy-nominated ensemble arrangement of “On Broadway.” (She noted the oddity of crediting an entire band for a single song arrangement—but that’s TSB, it’s a collaborative effort all the way.) Perhaps no other tune highlighted Sutton’s instrumental phrasing as well as “Sometimes I’m Happy,” from her entry into the opening bass/drum dialogue to her interpretation of lyrics that suggests –but isn’t—scat. Axt coaxed a tone from his modified upright bass that seemed to meld the best of acoustic and electric instruments. Tierney managed to evoke her own percussion in a duet with drummer Ray Brinker on “What a Little Moonlight Can Do” and led the ensemble into sinister harmonies on “The Lady Is a Tramp.” And then there was that stunning version of “Blue Skies” to close out an Irving Berlin medley. TSB can turn any music into their own and convince you that you never heard it before, making each performance truly a premiere. And I never heard TSB sound better or more at home. Something about Birdland…

Friday night (1/27) was my first visit to 55 Bar. For a quartet, it’s an unbelievably tight space that feels more Cheers than Vanguard, more neighborhood casual than big city club. All of which fits the Kendra Shank Quartet—Frank Kimbrough on Rhodes, Dean Johnson on bass and Tony Moreno on drums. (I heard Kimbrough is not all that fond of playing Rhodes but makes an exception for this monthly gig.) Over her two sets, Kendra covered significant muses--Abby Lincoln, Norma Winstone and Fred Hersch, as well as some reinvented standards and original fare. From the opening “Weaver of Dreams,” my usual response to the Rhodes (“geez I wish it was a piano”) had to be shelved as Kimbrough’s elegant touch and inventive spirit won out every time. The Abbey Lincoln selections—mostly from Kendra’s A Spirit Free tribute—included the tribal feel of “Throw It Away,” the country-folk zing of “The World Is Falling Down,” and the soulful “Should Have Been” –the last highlighting Kimbrough and seemingly summoning the spirits (“I feel Abby coming in!” declared Kendra). One of Kendra’s signatures is her uncanny ability to create opening verses, either from existing material or her own inventions. Woody Guthrie’s “Hard Travelin’” became the intro to a gorgeous “Sometimes I Feel Like a Motherless Child” (enhanced by Moreno’s crystalline cymbals), while Kendra’s “Is Love Blind” melded seamlessly into “Softly as in a Morning Sunrise,” vocalese floating atop Johnson’s bowing, then percussive bass and Moreno’s slappy brushes.

Seeing them perform back to back, I was struck by the similarities between Sutton and Shank. For both bands, it is all about ensemble communication and shared responsibilities for the music and the arrangements. The “band” indeed supports the singer, but the singer similarly enhances the band as another instrument. Both singers look broadly at repertoire, and neither is satisfied to leave “well enough” alone when it comes to interpreting a standard or traditional tune. Yet the results are significantly different –two distinctly different voices, individual approaches to interpretation and phrasing, two adept storytellers with different tales to tell.

If anyone needs proof that “chamber music” encompasses jazz ensembles, look no farther than the Billy Childs Quartet. In addition to the eclectic, symphonic chops of the pianist, the quartet includes one of the most under-appreciated saxophonists in jazz, Steve Wilson; the versatile bass master Hans Glawischnig; and the increasingly heralded drummer Eric Harland. At the “big enough” but cozy Jazz Standard (1/28), Childs revealed a deep well of technique and emotion throughout a set of all-original music, conjuring at various moments the powerful orchestrations of McCoy Tyner, the lyrical wanderings of Kenny Werner, the abstract imagery of Jason Moran. Sax and piano provided particularly compatible harmonies on “Stay” while Childs’ mission on “Starry Night”—to capture motion—was fully realized, initially via the piano/arco bass introduction, later through Harland’s pytrotechnics behind the trapset and the rise and fall of Wilson’s glorious soprano.

Any short visit to New York involves trade-offs. I missed Keith Jarrett’s solo at Carnegie Hall the night before my arrival. I missed Marcus Roberts, Jimmy Cobb, Luciana Souza and more during the weekend simply for lack of an alter ego to stretch my presence. I left a few days too soon to catch Ben Monder and Theo Bleckmann and another list of luminaries. But for my three nights in New York, I couldn’t ask for more. Equivalent quality exists elsewhere, particularly in here in the Twin Cities. But for the quantity of quality, New York remains the jazz center of the world.

Photos (top to bottom): Tierney Sutton with Kevin Axt at Birdland (1/26); Kendra Shank at the Artists Quarter in 2010. Photos by Andrea Canter. (Why do venues with the best lighting ban photography?)