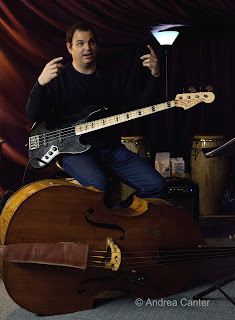 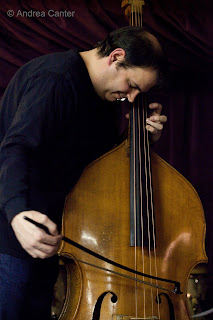 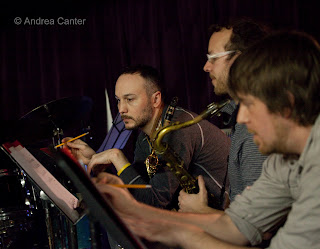 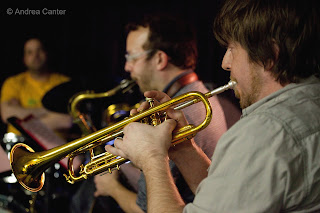 Last week, Chris Bates sent out his usual update. But this time, the listing was not so usual. In addition to the gigs in which he plays a critical sideman role, Chris invited us to one of his first forays into bandleading, and not just on a gig. We were invited to a ringside seat of the creative act itself, observing his quintet’s first encounter with new music during public rehearsals at Jazz Central. “Attendees will be witness to the evolution of these new compositions right alongside the performers. Ideas will be expanded on and modified as the tunes evolve through the collaborative nature of an improvising ensemble. New compositions will be heard at each rehearsal as the band builds up to recording at the beginning of April.”


It’s not the sort of invitation I am inclined to ignore. Along with about 35-40 others (some musicians themselves, some like me on the brink of understanding the meaning of chord progressions and time signatures), I became witness to the first stages of collaborative arranging, the first of three “open sessions” that will culminate in the debut recording of the Chris Bates Quintet.

“I have been involved in educational clinics and workshops for a long time but I had never seen anyone put a new project into this setting,” Chris told me after the first session. “I wanted an opportunity to hear my music played and then make edits and adjustments, and these sessions fulfill that need. I like the idea of exposing the process to people because there is something special that happens when a group gels at the beginning. Each tune finds a place within the musicians’ brains as they dissect and familiarize themselves with new material. From there you often see an exponential growth with highly talented players as they digest and elevate the music within a few minutes. Most of that growth is missed by an audience at a live show because the players have already gone through it in rehearsal.”

The session was interactive. Most of the interaction of course occurred between Chris and his cohorts—brother JT (drums) and his triple threat hornline of Brandon Wozniak and Chris Thomson on saxes and Zack Lozier on trumpet. But Bates involved his audience as well, giving us some background on the general approach as well as specific contexts and issues along the way as the band tackled four original compositions. A general inspiration was the music of the Dave Holland bands of the 1980s, the music of Charles Mingus, and traditional North African music. With each composition, Bates offered comments on his general intent, ran the band through the form (or maybe only half-way through) once to get some initial reactions, and then worked through one or more sections, experimenting with solos, harmonies, moods.

Take the band’s first encounter with “Dark Energy.” Chris explained it as an attempt to create something new from a “North African melodic zone,” drawing on influences of Israeli bassist Avishai Cohen and the melodic style of French bassist Renaud Garcia-Fons. A few trial runs later, Bates was pleased with the backgrounds which added new colors “that I had not considered.” The quintet tried out higher and lower intervals, putting the composition together with what Chris termed “collective minds.” Personally I am not sure what they were doing, exactly, but the work was clearly coming together with the “dark energy” of the title, the harmonies conjuring exotic spices and desert winds. And it never ceases to amaze me how three horns can create a full symphony.

“I was very happy with the results of the first session,” Chris said later. “I was surprised by the sounds I heard. I love hearing my songs live after listening to very bad computerized versions of them. That's not to say I don't have an idea of what a song sounds like before it's played, it just means that living, breathing musicians put life into the notes and that I am always surprised and overjoyed with hearing it 'for real'!” Me, too, I loved hearing it for ‘real’ and hearing not only live notes, but the beginning of a composition’s life cycle.

For Bates and the band, this was the first of three “open sessions.” And the work is just beginning. “I will be making changes to every song except 'This Is Tonight,'" Chris noted. “These musical ideas are evolving and I really like to edit and refine each composition. Most of these tunes have not been fleshed out quite enough so that they stand on their own…I also see many places I could have improved my speaking and explanations to the audience and I'll be making several adjustments in that area as well.”

Well, I suppose he could give us a master class in the “12-tone row” form of his tune, “The Jape.” But maybe that should come later. Right now, I am quite happy to sit back and let the musicians do their thing with the window open. That fresh air is already filling my brain with new discoveries about this thing called jazz.

The Chris Bates Quintet will hold two more “Open Sessions” at Jazz Central, on March 11 and 25th, 4- 6 pm. No cover but a $5 donation would be appreciated. Jazz Central is located in the lower level of 407 Central Av NE, free on-street parking on Sundays. No pre-requisites or age limits.

Photos (top to bottom): Chris Bates explained his rationale for bringing in the electric bass; Chris bowing a passage; Brandon Wozniak and the rest of the ensemble make some notations on a chart; Zack Lozier and Chris Thomson try out a tune. (Photos by Andrea Canter at Jazz Central on 2/12/12)