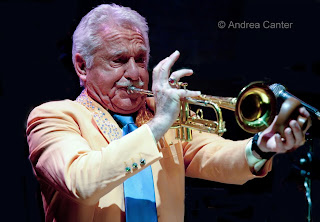 My friend Joan says she has discovered the secret to eternal youth: Play the trumpet into your 80s and lead a band of hot talents half your age. That formula probably won’t work for most of us but it sure seems like the right recipe for Doc Severinsen, in town this past week leading his Big Band at the Dakota. At 84, Doc could have really retired after 30 years leading the Tonight Show Band, but in the 20 years since that gig ended, he has only been busier as leader of his own bands and frequent guest artist/conductor for bands and orchestras worldwide. And he can still blow the heck out of that trumpet, suggesting lung capacity of a 40-year-old.

The spring 2012 tour is Doc’s first outing with his Big Band in five years, and the two nights at the Dakota his only stop at a small venue. The stage was expanded for the night, and the brass section filled primarily with local talents (trumpeters Adam Rossmiller and Zack Lozier, trombonists Michael Nelson and Scott Agster); Mary Louise Knutson was particularly highlighted on piano. She’s signed on for the rest of the tour, while Dave Graf will fill in for Nelson in the coming week.

Saxophonist Ernie Watts is also a highlight of this tour, and at 67, the only other band member who appears eligible for an AARP card. But somehow I think it might be Doc Severinsen who is injecting eternal youth into this outfit!