The Young and the Fearless 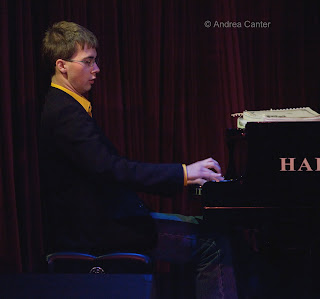 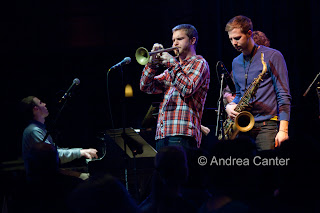 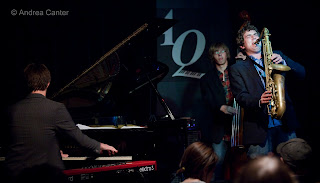 It’s been a good winter so far for young jazz musicians in the Twin Cities. It seems new opportunities come along every week, and often it’s because these future stars are creating their own—through teachers, slightly older peers, whatever connections they can find.

The latest installment of the Twin Cities Jazz Society’s Young Artists Series kicked off the winter season at the Artists Quarter in mid-December with a trio led by South High senior and drummer Emerson Hunton, and featuring fellow South senior Sam Wildenauer on bass and Northwestern U freshman (Minnetonka HS class of 2011) Brad Allen on tenor sax. Covers and originals filled the set, and pianist Quentin Tschofen, at the time in his first semester at UW-EC, sat in on the final tunes. (He’s now on his way to New York to start the jazz program at the New School.) A week later, Quentin performed a solo set as part of the Schubert Club’s Courtroom Series. In addition to a couple standards and a solo arrangement of his own “North,” Quentin’s skills were tested when he was asked to spontaneously improvise on “Jingle Bells.” And just a week ago, bassist Sam found himself playing with veteran improvisers at the Black Dog Café when he joined Alden Ikeda, Joe Smith and Nathan Hanson in the Community Pool/Deep End Series’ featured gig. Sam brings his own teen trio (Respective Sound Convergence Summit) to the Artists Quarter this weekend, opening for Bryan Nichols on Sunday (1/15).

Just before the New Year, the Minnesota Youth Jazz Band held its annual winter jam at the Artists Quarter. Directed by David Mitchell, MYJB is the premiere metro-wide big band experience for high school, and now middle school, jazz students. This evening was an amalgam of current and former MYJB musicians playing a variety of configuration, from small combo to full 22-piece band, and mostly on the fly. But they had learned their lessons well, some now finishing college studies. In full force, this might have been the largest ensemble to play at the AQ, spilling well into the seating area. And they probably displayed the most enthusiasm per square inch. The management of the constantly changing format and personnel was almost as incredible as the resulting music. And the audience? Mostly family and a lot of students whose enthusiasm closely matched the performers.

About eighteen months ago I was contacted by Tyler Anderson, then a junior saxophonist at UW-Eau Claire. He had recorded a CD and was hoping to get it reviewed. A few months later, when TCJS was seeking a small ensemble from Eau Claire for the Young Artists Series, director Bob Baca sent us to Tyler, who had just formed a new quartet called The Coriolis Effect. Their set last October was surely the most sophisticated we ever presented in this series. Now the band, their own EP in hand, is spending winter break touring around the upper Midwest, playing some club gigs and presenting clinics in several high schools. One of their first stops (last week) was Jazz Central in Minneapolis, and their promotional activities paid off as the performance space was filled, mostly with a young crowd who are often noticeably absent from jazz gigs in more formal settings. Ranging from freshman bassist Jordan Jenkins and junior pianist Cody Peterson to the soon-to-graduate seniors, Anderson and drummer Mike Malone, they played a set of original music. In the very dim light of Jazz Central, it was hard to remember these were guys still worrying about final exams and graduation credits.

Winter break provided an opportunity for another college musician to take the stage at the Dakota. Trumpeter Jake Baldwin, in his third year at the New England Conservatory in Boston, was already well acquainted with the Dakota stage. The Minnetonka High School grad first played in the downtown club with the Dakota Combo during his junior year, again as a senior, and a few times since with bands he and former Combo cohort, pianist Joe Strachan have put together for the Late Night series. And last May, Jake was again at the Dakota, scene of the International Trumpet Guild Convention and the finals of the ITG soloist competition. For last Friday’s Late Night, Jake led a sextet that he assembled when his frequent quartet collaborators were unable to make the gig, save Joe. That precluded a set of original music, but the band (featuring musicians tied to NEC and the U of M as well as South High and Manhattan School of Music grad Miguel Hurtado) smoked through a set of standards including a fine turn on “Darn That Dream,” some sizzling Parker and Monk, and a nod to the recently departed Sam Rivers (“Beatrice”) that highlighted U of M saxophonist Nelson Devereaux. Again, a strong and young audience got full exposure to modern jazz.

Of course, jazz is not dead. But more than merely existing, jazz, in the Twin Cities and beyond, is thriving through the talent and fervor of student musicians, their instructors and mentors, and the audiences they bring to their performances. One wonders, will they all find a place to play? Will there be enough of an audience to sustain them through careers in music? For those who are creating their own opportunities for performance and teaching, the prospects are bright.

Posted by Canterjazz at 9:41 PM