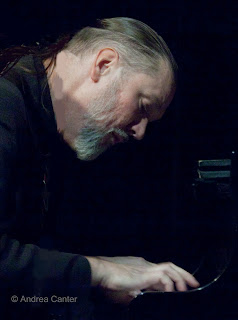 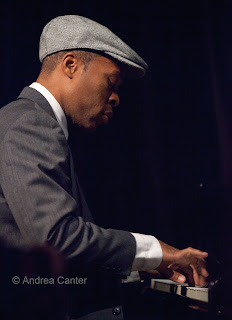 The piano at the Artists Quarter took a beating last weekend (even broke a string) but it was all in the name of monstrous talents from near and far, and the AQ’s “keyboard showcase” continued into midweek.

• Jon Weber Trio, January 13th (Artists Quarter). Always welcomed as a favorite adopted son, pianist Jon Weber had to play second fiddle, briefly, to Twin Cities Jazz Festival director Steve Heckler, who was on hand not only to sponsor the night but to announce the 2012 headliners. And we were all thrilled to hear that Joshua Redman will appear on stage with the Bad Plus, that Delfeayo Marsalis will bring his octet to Mears Park, and that Francisco Mela will appear as leader with his ensemble! But on with the show, and it is always a show when Jon Weber is at the AQ. As usual, he started off solo, soliciting requests, asking for keys, spouting off trivial facts that leave us scratching our heads – how does he store all that information as well as all that music? After a while, Jon invited on stage his trio mates for the evening, bassist Billy Peterson and drummer Kenny Horst, leading into a long set of stride and bop-filled favorites. And as always, the game was “Name That Quote” as Jon repeatedly found ways to insert fragments of other tunes, sometimes cleverly reprising something he played earlier.

An added treat was the guest appearances of not one, but two stellar local vocalists. Maud Hixson performed with Jon on his last visit in fall 2011, as well as in gigs at the Metropolitan Room last winter and at the gala New York Cabaret Conference in October. And Alicia Renee has performed at the jazz festival with Jon since she was I her mid-teens, and her voice as only matured since then. Maybe Jon’s jams at the 2012 festival will include a hand-picked singer showcase? Start with Maud and Alicia.

It’s not hard to understand why Weber was the heir apparent to the host chair for the new iteration of Marian McPartland’s Piano Jazz (Piano Jazz: Rising Stars). He’s personable, funny, quick-witted and, yeah, a terrific musician.

• Richard Johnson Trio, January 14th (Artists Quarter). If you were at Bobby Watson’s set at the 2010 Twin Cities Jazz Festival, you should remember Richard Johnson, the young pianist who burned up everything Watson tossed out. He’d already done the same working for Wynton Marsalis and Russell Malone in his early career. Now moving more forcefully into his role as leader, Johnson was an interesting follow-up to Jon Weber, possessing some of Jon’s predilection for stride and swing, and similar tendencies to quote from far and wide. With Graydon Peterson on bass and Reid Kennedy on drums, it was a night of still-youngish lions at play, and the seldom-tapped jazz potential of West Side Story provided an ambitious playground. Highlights—Johnson’s solo on the “Jets’ Song,” chocked full of the history of jazz from stride to post bop; Peterson’s arco basslines tracing the melody of “Somewhere;” the staggering rhythm of the arrangement of “I Feel Pretty,” complete with riffs from “There Will Never Be Another You.” Johnson likes it here and plans to return monthly in the coming year to a variety of local venues. To date, he has gigs set at Shanghai Bistro in Hudson (2/4), Hell’s Kitchen (2/25) and again at the AQ (3/16-17). Stay tuned.

• Bryan Nichols Quintet+1, the Music of Keith Jarrett’s American Quartet, January 15th (Artists Quarter, TCJS Jazz From J to Z series). We’ve heard a lot from the Bryan Nichols Quintet lately, but never playing this music and never with the bonus of playful percussionist Jay Epstein. Bryan noted that this is music many have never or seldom heard, although a number of us in the audience remember hearing it when it was first issued in the 70s. And after hearing 75 minutes of moderately controlled and melodic mayhem, we have to wonder, why isn’t this music played more often? The answer may be –it is difficult and requires an incredible level of collaboration among the musicians. Thus the band had a set list of 9 tunes—and only 9 tunes, including one from outside the Jarrett recordings, a cover of “Trieste” to honor Jarrett’s late drummer, Paul Motian. “This is all we learned,” said Bryan before the one encore (Dewey Redman’s “Mushi Mushi”). “We can’t do another one.”

If Jarrett wanted to revive this body of work today, he would need look no farther than saxophonists Mike Lewis and Brandon Wozniak (doubling the reeds in the original quartet), bassist James Buckley, drummer JT Bates, and the additional layer of Jay Epstein as the sixth man on percussion. And, in fact, if Jarrett wanted to just sit back and listen, he could do no better than Bryan Nichols as his alter ego. The energy level alone could keep lights burning in LA for weeks, and the virtuosic soloing and collective bargaining pushed the musical envelope throughout the evening. This music is as innovative and ear-catching today as it was 40 years ago. And following a 2011that might be dubbed “The Year of Bryan Nichols,” the pianist just moved it up another notch to kickoff 2012. If you missed the show, or if you want more, Bryan promises to mix some Jarrett with original music when he returns to the AQ with the quintet next weekend (January 27-28).

• Dan Musselman Trio, January 18 (Artists Quarter). Young Dan Musselman capped a week of piano action at the AQ with a laid-back outing featuring Matt Peterson on bass and, perhaps less familiar, Alex Young on drums. Musselman can rip through the keyboard like McCoy Tyner but took it somewhat more gently this evening, perhaps wary of that piano string with a temporary fix pending replacement. About half the first set were Musselman originals, from a brooding, dark “Winter Solstice” to an ominious “Sahara” that suggested a back alley in Marakkesh to a more up-tempo “Outbound” and the mini-epic “On the Way.” Drummer Young’s transcription of Brad Mehldau’s “When It Rains” yielded the most lyrical moments of the set, while bassist Peterson offered a hopeful melody on “Today Is the First Day of the Rest of Your Life” and the solemn syncopation of a traditional Israeli folksong. Far too few heard this music. Musselman deserves a wider audience.