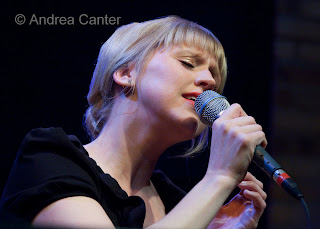 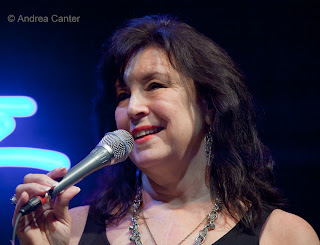 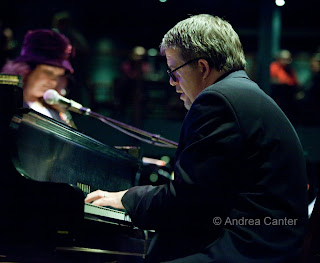 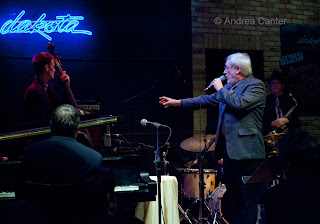 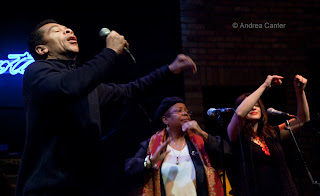 Most of the Twin Cities vocalists who were not among the fifteen on the Dakota stage Tuesday night were in the audience, and many more musicians, writers, jazz fans, friends and family crowded the club for nearly four hours to pay respects and send off a musical tribute to popular singer Christine Rosholt. Rosholt, whose suicide on December 28th shocked family and community, leaves a significant hole in the area jazz family. She performed at every conceivable venue from southern Minnesota to the North Shore, in clubs, concert halls, libraries, nursing homes, gala benefits and private parties, in duos, quartets, big bands. She started out mining the Great American Songbook but lately was stretching her musical wings, most recently diving head first into songs written by British pop songwriter Kevin Hall, many written specifically for her as the pair worked on what would be her last recording, Pazz. Hall returned from England to participate in the memorial event.

A rotating cast of musicians supported the singers Tuesday night, with organizer, long-time musical partner Tanner Taylor and her other long-standing collaborator Chris Lomheim sharing piano duties with Hall and George Maurer; the drums were manned by frequent cohorts Jay Epstein, Mac Santiago, and Paul Midori; her usual bassist Graydon Peterson managed the upright through the entire three sets. Throughout the evening, KBEM's Maryann Sullivan choreographed the sets while showing off her own vocal chops. Song choices were sentimental and tragically logical, from “I Remember You” (house band) and “I’ll Be Seeing You” (Rachel Holder) to “Leaving” (Vicky Mountain) and "Bye Bye Baby" (Maryann Sullivan). Sophia Shorai offered a heart-rending “Smile,” one of Christine’s favorites with its telling lyric; Katie Gearty rocked poignantly on “Let It Be;” Rhonda Laurie (“Blue Skies”), Paula Lammers (“You Must Believe in Spring”) and Arne Fogel (“That Old Black Magic”) offered some hope while lines in “Cheek to Cheek” (Nichola Miller) and “Close Your Eyes” (Lila Ammons) seemed to take on new meaning in this context.

The second set, with Hall on piano, featured some of the songs from Pazz, that last collaboration celebrated just over a month ago on this stage, and here performed by Christine’s “back-up” singers, Rachel and Katie. But it was Patty Peterson who skillfully handled the most difficult presentation, singing the seemingly prophetic “Last Goodbye.” Kevin put speculation to rest; he wrote the song before he met Christine. Tragically the lyrics became all too relevant.

J.D. Steele, with Debbie Duncan and Katie Gearty, closed down the evening in a more celebratory fashion with a Motown finale. And leave it to Christine, as if a last gesture of support for the music scene she worked so hard to master, to bring together one grand display of the depth and breadth of local musical talent. There may be one less star in our jazz galaxy, but its light still travels with a bright after-glow.