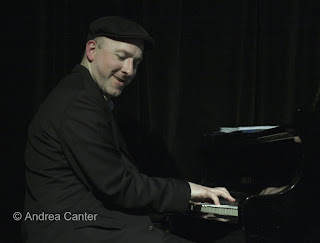 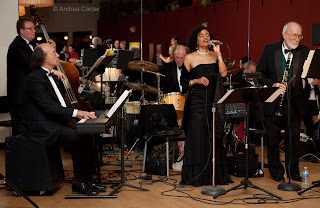 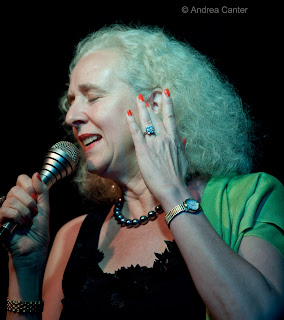 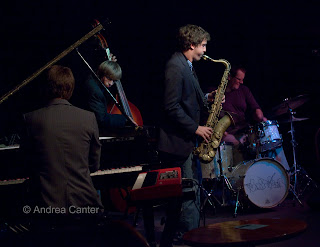 The joy of celebrating and anticipating the New Year is tempered this week with the loss of our dear friend and jazz chanteuse Christine Rosholt. But she would be the first one to tell us to get out and share some good music with friends and family. So let’s do it, there’s enough to keep us in good spirits every day.

Highlights This Week
With a Saturday night of New Year’s Eve special gigs, it might be easy to overlook some fine options for Friday night. But don’t! For starters, enjoy New York-based pianist and one of our favorite visitors, Rick Germanson, playing in trio at the Artists Quarter (12/30) as a warm-up to the annual AQ New Year’s Eve Party with vocalist Carole Martin. In trio, you can readily hear the lyricism, the layers of harmony, the eclectic approach to improvisation that has marked Germanson’s performances and recordings over the past decade. And of course, New Year’s Eve at the AQ means Carole Martin and a great band, this year anchored by Rick on piano, with Graydon Peterson, Kenny Horst, Dave Karr and surprise guests. Carole has been headlining the year-end bash for a number of years now, and there are a few predictables—great torch songs and feisty blues, a down-home light buffet and noise makers, a champagne toast, and a club full of people who love jazz and the AQ. (Reservations still available.)

Of course there’s more for New Year’s Eve, and with some gigs scheduled early in the evening, you can enjoy some good music and still get home early, or make it a double-header. Among those early options, Maud Hixson and Rick Carlson gently chase away 2011 at Honey; Nichola Miller and Tanner Taylor swing the Hell out of Hell’s Kitchen; Lee Engele and Pietro Benso sway at Nonna Rosa’s. A bit later, catch Joann Funk and Jeff Brueske in the Lobby Bar of the St Paul Hotel; the Benny Weinbeck Trio at D’Amico Kitchen at the Meridien/Chambers; or the first New Year’s Eve Jam at Jazz Central.

Save some energy for 2012! Charmin Michelle is off to a busy start, not only with her usual Sunday (1/1) gig with the Jerry O'Hagan Orchestra at Cinema Ballroom and her Monday (1/2) and Wednesday (1/4) nights with Denny Malmberg at Fireside Pizza, but also on stage at the Dakota for “Foodie Night” at the Dakota on Tuesday (1/3), swinging hard with Rick Carlson, Steve Pikal and Nathan Norman. Another area favorite, Lucia Newell is back at the Artists Quarter Wednesday night (1/4), and there’s no brighter way to start the new year than with some south-of-the-border fare sung in the original language.

A few months ago, I heard a young band of jazzers from the University of Wisconsin-Eau Claire, dubbed The Coriolis Effect. It was pretty sophisticated stuff for college musicians, and now they are taking their compositions and arrangements on a Midwest tour during January, starting off at Jazz Central on Thursday night (1/5). Leader Tyler Anderson blows a mean saxophone, and his cohorts (Cody Peterson on piano, Jordan Jenkins on bass, Mike Malone on drums) contribute their own works. We’ll be hearing a lot more from them.

More Jazz!
A lot of venues are a bit slow transitioning to 2012, so look for updates online, particularly on the KBEM jazz calendar. A few more recommendations: