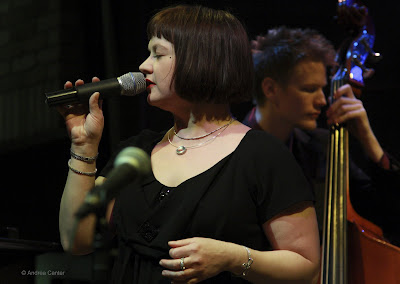 I first heard Christine Rosholt sing at the Dakota, maybe in 2004. She had a sincere perkiness that was contagious and carried over into her renditions of great tunes from the 30s and 40s. She was just at the beginning of her singing career, and her voice was still finding its mark. But she already knew how to draw in an audience to hear her stories, well prepared from her education at the Children’s Theater and as a performance art/photography major at the Art Institute of Chicago. And just naturally one who enjoyed interacting on the live stage.

I last heard Christine sing at the Dakota on December 1, 2011, a celebration of her third and most ambitious recording (Pazz) that pushed her beyond her comfort zone into pop, R&B and rock arrangements of songs, mostly written for her, by British songwriter Kevin Hall. It capped a year (or two) that revealed a more daring, more personally styled singer who was as likely to sing Frishberg or Blossom Dearie as Harold Arlen or Irving Berlin, one who now cited the influences of Tierney Sutton and Karrin Allyson as well as Billie and Ella. Her voice had found its mark. In October, Christine revitalized a 2005 production of songs based on Shakespeare’s sonnets and dialogue. Then there was the new recording with potential pop chart hits. And ever the warmth, the banter, the stories –the brightness that kept the demons far from public view.

My last interview with Christine was back in August. Things were coming together for “Jazz Meets the Bard” and the final mix was underway for Pazz. “It’s fun to break away from the song book and work on something that pretty much no one has heard before,” she said.

What we saw on stage, particularly at the Pazz release, was the fun, the delight in presenting new music, the camaraderie with her musicians, that love of performing for a live audience. We never saw Christine give in to the dark side.

On December 28th, the demons won. But they can’t take away our memories of all that.

Photo: My favorite of Christine, from the TCJS 30th anniversary party at the Dakota in February 2009, with frequent cohort Graydon Peterson.