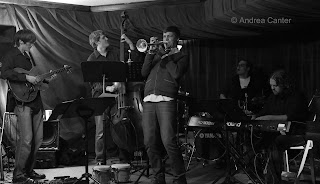 I was in Iowa City all weekend so missed some good music, I’m sure. But I also caught the Johnson County Landmark in Iowa City, surely one of the country’s best college big bands, directed by esteemed composer/arranger John Rapson. Part of the program was devoted to music from the Radiohead Jazz Project, established a year ago by James Miley and Fred Sturm with an international team of arrangers. Universities throughout the U.S. are performing this music, and the Johnson County Landmark gave us well-executed and thoroughly enjoyable renditions of “Idioteque,” “Everything in Its Right Place,” and “Bodysnatchers.” The program also included a very swinging “In a Mellow Tone” and some works by Ken Scahphorst.

Here at home, I caught a couple terrific CD celebrations reflecting our region’s range of repertoire and experience, and a night showcasing the depth of artistry on the MacPhail faculty:

John Raymond Project CD Preview at Jazz Central, November 8. I remember a cold November night maybe six or seven years ago when four of us came to a late evening show at Bryant Lake Bowl for the debut of the John Raymond Project. John’s mom and I were the ones over 20. John was this skinny 19-year-old trumpeter trying out some new music with pals from UW-Eau Claire. Since that night, John has been reeling in much larger audiences, the JRP evolving across the years at Eau Claire and now in New York, John racking up accolades and awards as composer and performer, earning his Master’s Degree from SUNY-Purchase, and now ready to release a new recording produced by his mentor Jon Faddis. Officially, Strength & Song will be released in spring 2012, but John is raising funds for CD distribution with a series of preview gigs here and in nearby Wisconsin haunts, using a band of mostly former UWEC jazzers (guitarist Vinnie Rose, bassist Jeremy Boettcher, keyboardist Scott Currier) plus recent Manhattan grad and rising local drum star Miguel Hurtado. The recording includes former Twin Citian Javier Santiago on piano and hot New York-based guitarist Gilad Hekselman, with guest appearances from pianist Gerald Clayton and saxophonist Tim Greene.

The audience Monday night at Jazz Central was treated to the music of the CD plus a few more. This may not be the same band as the recording, but you wouldn’t know it—the arrangements allowed a lot of stretching out, not just for the leader. Most of the compositions were John’s and took us tumbling through ideas on one, settling back to feel the colors wash over our ears on the next; the band also proved skillful at rearranging standards, giving us a playful run at “Straight No Chaser.” It’s a long way from Bryant Lake Bowl. And I bet it is a long way from where John is heading next. It will be an incredible ride. You can keep up with John and learn more about the recording project on his website.

Doug Haining Quintet CD Release at the Artists Quarter, November 9. Haining fits his CD title perfectly, Last Man Swinging, although he might have to fight his bandmates for the crown, with such swingers as Rick Carlson, Dave Graf, Steve Pikal and Dick Bortolussi on board. Over careers now spanning at least three decades each, this is a band that can probably make anything from a nursery rhyme to a Bach Cantata swing with joy and logic. Thus the tunes they recorded and played at the AQ were sonic putty, from the swaying opener, “It Ain’t Necessarily So” to the reconfigured “Two Funky People” where two clarinets became a clarinet and trombone (hmm, talk about two funky people—Haining and Graf!) to the ultimate delight of “Jitterbug Waltz.” What you can’t readily grasp from the CD alone is how much fun these guys are having, and of course that joie de swing is highly contagious.

Jazz Thursdays at MacPhail, November 10. Two of the jazz gems in the Twin Cities are the beautiful performance space of Antonello Hall at MacPhail and MacPhail’s Jazz Thursdays concert series, which fortunately occur together 4-5 times each year. The new Jazz Thursdays season launched tonight with a whirlwind faculty extravaganza, featuring some of the area’s most talented artists taking turns in varying combinations from duos (cellist Jacqueline Ultan and bassist Adam Linz finding the classical foundation of Andrew Hill’s “Golden Sunset”; a bass/sax duel between Linz and altoist Greg Keel on Parker’s “Now’s the Time”; a delicate string duet among Linz and guitarist James Allen on Esbert’s “Frevo”) and trios (pianist Bryan Nichols, Linz and drummer Phil Hey covering Dewey Redman; Linz with pianist Tom Pletscher and trumpeter Brad Shermock covering Gary Peacock) to a quartet with Shermock, Ultan, Hey and vocalist Vicky Mountain on her original “Leaving” and a sextet with Mountain, Nichols, Allen, Shermock, Ultan and Hey going into dark corners on “Lady Madonna.”

But the most fun was the finale, all nine musicians including two pianos swapping tales on Ornette Coleman’s “Friends and Neighbors.” There’s easily enough talent on the MacPhail jazz faculty for another night of such hip exchanges without repeating any of the cast. “Jazz Thursdays” could easily last all week.

Photos: (top to bottom) The John Raymond Project at Jazz Central; Doug Haining and Dave Graf swing at the Artists Quarter; Greg Keel and Adam Linz duke it out at MacPhail (all photos by Andrea Canter)
Posted by Canterjazz at 10:17 PM