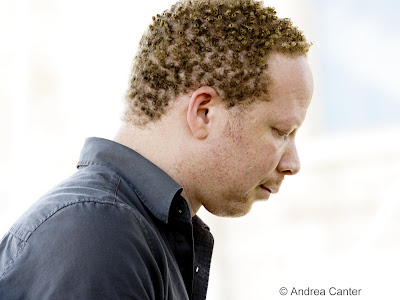 High on my list for jazz CD of the year is Craig Taborn’s long-awaited solo set of improvisations, Avenging Angel. Released midyear on ECM, the recording has drawn praise far and wide, but perhaps nothing father or wider than its inclusion in the recent listing of “cultural artifacts” of the new millennium posted by online magazine Slate. Slate’s editors posed the question to their contributors, “Which cultural artifacts since 2000 will speak to future eras? What are the timeless expressions being forged in our noisy moment? Even more important: What are we overlooking that will one day be seen as an essential document of our time?”

Jazz critic Seth Colter Walls nominated one recording of the past decade, Taborn’s Avenging Angel, noting that “Anyone who wonders why their ‘indie’ music has become so familiar as to be arguably equated with ‘adult contemporary’ should take a tour of Taborn's sound-world: a place where echoes of Debussy, ’70s AACM-school jazz, and minimal techno collide with a force that could easily preclude intelligibility. In Taborn’s hands, that radical chorus really sings.”

Slate’s listing only included one other piece of music, Black-Eyed Peas’ “I Gotta Feeling.” But Taborn is in very interesting, diverse company with the likes of television’s The Wire, the Ugg boot, tennis star Roger Federer, Bob Dylan’s Chronicles Volume One, and the iPod. Taborn, who has doggedly avoided the limelight throughout his career and invests no ego in the legions of “best of” lists, probably had a Woody Allen moment when he saw the Slate’s slate. But it couldn’t happen to a better representative of the merger of inspirations, technologies and artistic energies that will propel jazz through the 21st century. And the sound world of Craig Taborn surely will outlast the iPod.

See the full roster of nominees from the Slate

Photo: Craig Taborn at the 2009 Iowa City Jazz Festival with the Chris Potter Underground. (Photo by Andrea Canter)
Posted by Canterjazz at 4:34 PM