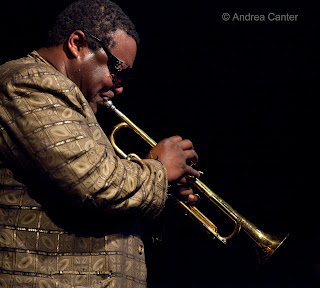 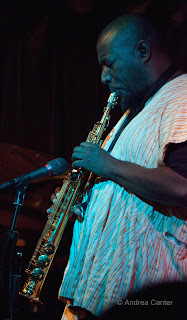 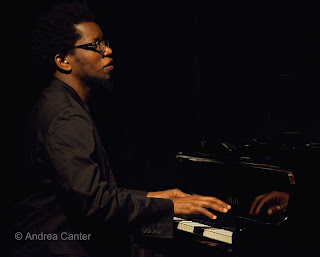 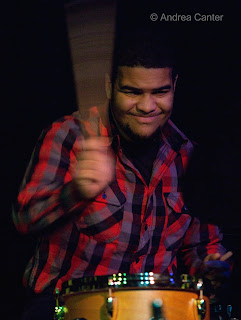 I love my annual treks to northern California but it always seems to coincide with something special, jazz speaking, back home in the Twin Cities. In the past week, I missed the too-infrequent appearance of Patricia Barber (at the Dakota). I heard positive comments about the show. I missed the first performance of the quartet Good Life (Brandon Wozniak, Peter Schimke, Billy Peterson, Kenny Horst) at the Artists Quarter. I heard positive comments about the show. I missed a rare pairing of Nichola Miller and Maud Hixson (at the Dakota). Maud thought it was a blast. I missed a performance/Q&A by the Denver-based Aakash Mittal Quartet at Walker West. The quartet and folks at Walker West were pleased with the turnout and sounds like everyone had a great evening.

I got back in time to catch two sets with the Wallace Roney Sextet at the Artists Quarter (October 19). Billed initially as a quintet, Roney brought along a second saxophonist (paired with his brother Antoine), and the addition of young Arnold Lee on alto was icing on the cake. This is a tight, but not too tight, ensemble that teeters on the edge of edginess without losing its accessibility and melodicism; Roney is a leader who doesn’t need to continually shine the light on his own talent but, rather, gives each of his cohorts a lot of space. There were times when he returned to center stage for only a short break, quickly backing away as the musical leadership was tossed back and forth.

In his early career, Roney was often criticized for too closely following his mentor, Miles Davis. There is still a lot of Miles in his horn but there’s pieces of Coltrane and Coleman, and mostly Roney himself. He often wears a modal mantel, blazing through climbing scales in a dizzying exhibition, but was perhaps most effective when backing off into lyrical balladry, as on his interpretation of “I Love You” near the end of the first set. For the most part, it seemed, the band ran through original compositions—or reinventions that became original compositions? No matter, each set unfolded as multi-part suites, each segment stretched out and played with little pause in between. But there was plenty of joyful blowing, energetic, often dazzling interactions, and ecstatic soloing.

Antoine Roney (on tenor) was as much the center of attention as brother Wallace, calling up Coltrane in spirit without imitation. The younger guys gave plenty of reason for optimism in considering the future of jazz: Pianist Aruán Ortiz offered articulate inventions at warp speed and on thoughtful downshifts; bassist Rashaan Carter provided funk and groove one minute, serious depth charges the next; drummer Kush Abadey served notice that he can rattle, roll, and splatter with the best of his generation. And then there was that sixth man, Arnold Lee, blowing like a veteran and sharing the hornline conversations with the Roneys as comfortably as if shooting hoops with his pals on the playground.

The Artists Quarter has increasingly played host to visiting national artists, offering tickets at bargain prices (Roney was one of the most expensive of late at a mere $22), ensuring a younger audience as well as long-term jazz aficionados have access to some of the best in modern music.

Support our local “jazz and only jazz” club. It will feed your own ears.