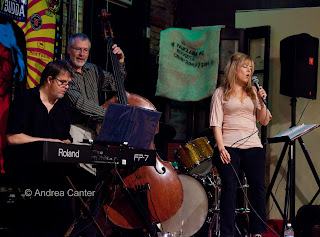 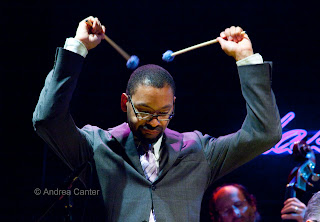 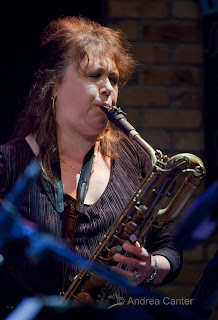 Maybe it is just my imagination or luck, but it seems the Twin Cities jazz scene is heating up and about to bubble over. There’s a lot to hear, often simultaneously, meaning there’s a lot to miss as well. Which means I can be just as overwhelmed here as in New York. I think that is a good thing. Highlights, from my perspective:

Dave King Trucking Company at Studio Z, September 24. This was the first in the monthly Jazz at Studio Z series curated by Zacc Harris with support from an MRAC grant. Some of the usual suspects in the DKTC were missing—New York saxman Chris Speed and Happy Apple guitarist Erik Fratzke. Brandon Wozniak handled the horn duties alone, which just meant more soloing from the guy who is one of the area’s the most inventive musicians; Luke Polopnik took over on guitar, which meant a somewhat more mellow, Frisellish sound. With King and Adam Linz, the result was well up to DKTC standards as the band moved through some of the most appealing compositions of their recent release, Good Old Light, as well as some other concoctions. And when King crushed his snare, he was in the perfect setting to find back-up percussion supplies. This is the home to Zeitgeist!

The Peterson Family’s "Our Love Is Here to Stay" at the Bloomington Center for the Arts, September 25. With matriarch Jeanne Arland Peterson celebrating 90 last month, there’s been a lot of Peterson Family gigs lately. But each time out, it’s a somewhat different configuration, and this matinee kicking off both the Bloomington and TCJS concert seasons focused on the songs and times of the Gershwins with extended Peterson Family talents from Jeanne to her offspring to nephew and grand nephew. This is not just a multi-talented family but a bunch of multi-talented individuals. And clearly, their love, and their music, is here to stay.

Christine Rosholt, Jazz Meets the Bard at the Jungle Theater, September 26. My nominee for the most transformed jazz artist in the Twin Cities, Christine has been performing around town for much of the past decade, starting out as an entertaining, adequate interpreter of the Great American Songbook and morphing steadily into an even more entertaining, more personal, more complex interpreter of… most anything musical. From her Elizabethan ruff to her informative, stand-up comic style banter with the audience and stellar vocal performance throughout, Jazz Meets the Bard Meets Christine was a fine night of songs and stories. (And watch out for Christine’s upcoming CD release with English songwriter Kevin Hall in December as she melds jazz and pop into “Pazz.”)

Emily Green with the Chris Lomheim Trio at The Nicollet, September 27. Maryann Sullivan of KBEM is curating this Tuesday night series at The Nicollet coffeehouse, and so far it has been an impressive and diverse array of musicians. One-time student of Vicky Mountain who has rarely performed at club venues, vocalist Emily Green joined husband/pianist extraordinaire Chris Lomheim and pals Jim Chenoweth and Reid Kennedy for some light and sassy takes on jazz and pop classics. Her voice is sunny and charming. Hopefully there will be more opportunities to enjoy it.

Lionel Hampton Celebration at the Dakota, September 27. Vocalist/producer Jaycee Falk has assembled a cast of Hampton’s alums and admirers for this tour showcasing the great vibraphonist’s music. Heading the bill, an inspired Jason Marsalis, who has shifted his focus from drums (which he still plays in bands like John Ellis’s Double Wide) to vibes (which is his only instrument in his own band). Seeming uninspired or simply bored on his own gig at the Dakota a year ago, this time out Marsalis was animated and artful, two important qualities in a vibes player. His elder partners on this gig, saxophonist Red Holloway and trombinst Fred Wesley, though clearly masters of their craft, were decidedly upstaged by the local horn team—trumpeters Jeff Gottwig and Adam Rossmiller, saxophonists Pete Whitman and Kathy Jensen; bassist Gary Raynor and drummer Dave Schmalenberger ably provided the pulse for the night. Diane Schuur only sang three songs, but they were three highlights of the night. The only real flaw in the show was emcee Falk himself, whose nightclub chatter got old quickly and added about 20 unnecessary minutes to an otherwise delightful, high-energy evening. But Falk, as producer, is commended for taking full advantage of the talents he found on the local scene. It gave new meaning to “Flying Home.”

Jane Monheit at the Dakota, September 28. Speaking of transformations: Five years ago, maybe only three, buttery perfect vocalist Jane Monheit seemed headed in a too-pop, too smooth direction, particularly on her recordings. Her live shows always hinted at a more personal sound but she was “packaged” for mass appeal. Then she became a first-time mom. She took control of her recording. In short, she became the jazz singer her early potential suggested she would become. Sometimes she scats, sometimes she doesn’t—whatever seems like the natural thing to do, it sounds effortless either way. Even without scatting –which is overrated as a marker of “jazz” singing, Jane seems comfortable sending her voice in whatever direction best fits the lyric and underlying emotion. While her set was mostly a round-up of favorites we’ve heard her do before, songs like “Over the Rainbow,” “Taking a Chance on Love,” and “That’s All” were rearranged and/or reinterpreted, making it a new set. And she is still buttery perfect.

Stephen and Greg Paulus and the Minnesota Orchestra, “TimePiece” at Orchestra Hall, September 29. Most fans of classical music in Minnesota are familiar with composer Stephen Paulus. Some jazz fans in the Twin Cities remember his son, trumpeter Greg Paulus, recently minted from the Manhattan School of Music and now making a name for himself as a composer and performer of electronic music. The inevitable? Father and son working together on a composition for orchestra and jazz soloists. The centerpiece of the program kicking off the Minnesota Orchestra’s new season, Paulus and Paulus wrote a score that highlights the versatility of a large classical orchestra and the heart and soul of jazz from some of the area’s most accomplished improvisers (Bryan Nichols, Mike Lewis, Adam Linz, JT Bates). “TimePiece” does not attempt to make jazz artists of classical musicians or classical musicians of jazz artists, but rather melds two worlds into one dramatic composition. (Two more nights, September 30-October 1—tickets still available.)

Photos: (Top to bottom) Emily Green with the Chris Lomheim Trio at The Nicollet; Jason Marsalis and Kathy Jensen with the Lionel Hampton Celebration Band at the Dakota (photos by Andrea Canter)
Posted by Canterjazz at 10:29 PM