The Night the Music Stopped in Detroit 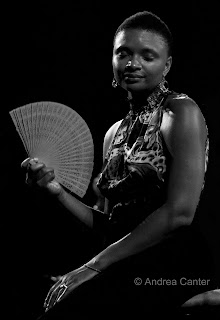 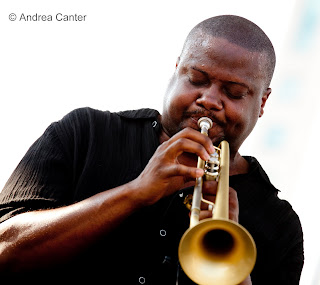 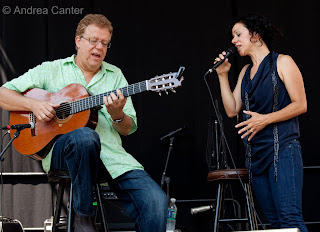 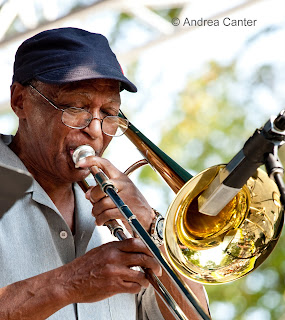 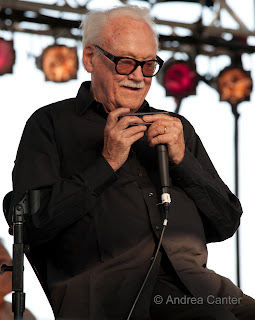 This is my fourth consecutive Detroit Jazz Festival and I have always been amazed at the weather--I've only sat through one rainy set and we had some off and on drizzle another afternoon. Until tonight. Fortunately I had taken a break to meet friends for a bite so I was not actually caught by the storm that roared through downtown Detroit early this evening. But it looked like the photos of Hurricane Irene for a good 20 minutes. We splashed our way back to the Waterfront Stage--now the Waterlogged Stage. We waited as staff pulled plastic tarps on all instruments and equipment. We crossed our fingers that the predicted second wave would not pre-empt Jason Moran and Bandwagon, or the Dave Holland Octet. But soon the announcement that all remaining music was canceled. (Later, though, I got a media advisory that the Holland set reconvened at the Volt jazz club in the Marriott an hour late. By then, we were long gone.)

One of the volunteers told me that, in 20 years, he had never seen this festival actually shut down due to weather. I've been impressed with all the outdoor jazz festivals I have attended that this doesn't happen more often--especially given the summer dates. I remember a sudden downpour prompting the audience to gather at Mose Allison's feet, squeezing ourselves onto the stage at Mears Park in St Paul during one Twin Cities Jazz Festival. I remember sitting huddled under an umbrella to hear the final tunes of Dewey Redman set when the TC Festival was held on Peavy Plaza. And I remember waiting out a long rain delay in a campus bar at the Iowa City Jazz Festival. But never a total wipe out.

But one great thing about the Detroit Festival is its 3 1/2 days of nonstop music. There will be more on Sunday and Monday. And what we've heard so far makes the trip worthwhile already: A powerful threesome of vocalists opening the festival to "Sing the Truth"--Diane Reeves, Angelique Kidjo and Lizz Wright, with a band that included Geri Allen on piano and Terri Lynne Carrington on drums; a double dose of Sean Jones fronting the Detroit Civic Jazz Orchestra and leading his own sparkling quintet; the ageless Curtis Fuller with a sexet boasting a St Paul favorite, saxophonist Eric Alexander and his frequent cohort Mike LeDonne on piano; the charming and golden-voiced Brazilian Lucian Souza; the perfect partnership of Kenny Werner and 89-year-old Toots Thielmans. And so much more to come, weather permitting (Joe Lovano's Us Five, Vijay Iyer, Amina Figarova, Ivan Lins, Anat Cohen, etc.

And I take some comfort knowing that a Big Ten football game in Ann Arbor was also cut short this evening. For once, jazz and football got equal treatment.

Photos: (top to bottom) Lizz Wright in a quiet moment during the Sing the Truth set with Dianne Reeves and Angelique Kidjo on opening night; Sean Jones on the Cartharrt stage; Rombero Lubambo and Luciana Souza on the Pyramid Stage; Curtis Fuller on the Mack Ave Waterfront Stage; Toots Thielmans on the soon-t0-be-waterlogged Waterfront Stage (all photos by Andrea Canter, September 2-3)