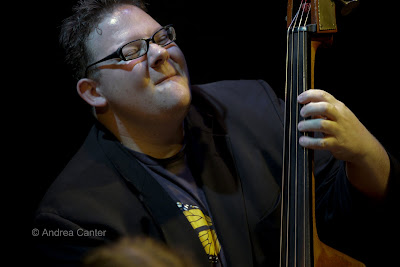 The first time I heard Adam Linz was as a solo opening act for Happy Apple at the Cedar Cultural Center, before Happy Apple became an international sensation and before Adam trimmed off his dreadlocks. It was maybe the first time I heard solo bass. It intrigued me then, and even more so now. And now I have heard Adam in multiple solo, duo, trio and larger ensembles, playing everything from straight ahead jazz to Mingus to free improv. Of course there really is no such thing as a “solo” performance from Adam, as he typically vocalizes (on key) whatever he is bowing or plucking, sort of a “duet for one.” It’s annoying if it’s Keith Jarrett’s moaning during solo piano. It’s simply part of the charm of Adam’s music.