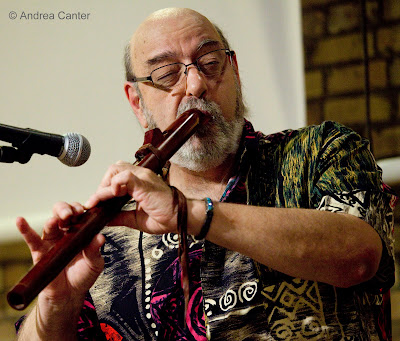 Bobb Fantauzzo is a many of many flutes. Each flute generates a slightly different face, I would guess a slightly different embouchure given the varying sizes of the wooden cylinders and their mouthpieces. For his performance tonight at The Nicollet with the trio Jazz Zen (electric cellist Aaron Kerr, drummer Darren Pinto), Bobb brought along seven or eight diverse-looking instruments in the flute family, and said it was just a fraction of his collection. Maybe one looked somewhat like the familiar C flute we see in symphonies and jazz ensembles. Others were as long as a tenor sax and played straight down like an oboe (who could reach it if held horizontally?), short like an alto recorder, embellished with blade like projections on the bottom, thin or thick in diameter. And Bobb is the only flautist I have seen who transforms the woodwind into a percussion instrument—hitting it against his hand. Different flutes, different slaps.

So what sort of music is generated by the merger of wooden flutes, electric cello and drums? Very cool. Very other-worldly, folkloric, even when taking on Herbie Hancock and Wayne Shorter. Mostly the band plays original music, as on their new recording, Bounce Off the Moon. But their “Footprints”—talk about Jazz Zen!


Photo: Bobb Fantauzzo on one of his many wood flutes at The Nicollet, September 20, 2011. (photo by Andrea Canter)
Posted by Canterjazz at 12:05 AM