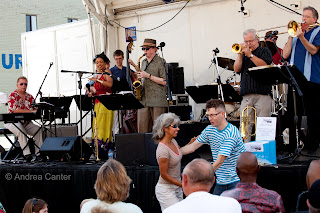 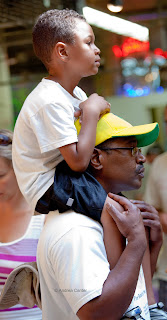 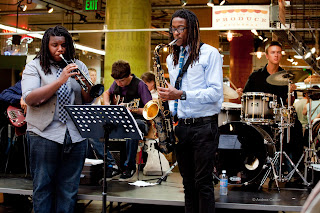 Community jazz and more general music festival seem to be “in” these days, at least in the Twin Cities. After a successful 2nd Dakota StreetFest in mid-July, the first-ever Midtown Global Market Jazz Festival took off last Saturday, and hopefully the audience and vendor response will help make this an annual event. Organized to help celebrate the unique market’s fifth anniversary, the one-day, free gathering was geared toward families, offering non-stop music from noon til 7:30 pm on alternating outdoor/indoor stages.

The market—in the old Sears building in the heart of south Minneapolis—was open for business as usual, with its diverse array of food, produce, clothing, crafts, etc. But it was not really business as usual, with a much higher than typical volume of browsers and shoppers throughout the afternoon and early evening. Headed by TCJS President and accomplished vocalist Lee Engele, the festival committee put together a “global” sampling of Twin Cities jazz, featuring top metro ensembles on the outdoor Allina Stage, and a wide-ranging trio of student ensembles on the indoor TCJS Student Stage. For those who did not get enough, music continued into the evening in the bar of the adjacent Sheraton Midtown Hotel, with two guitar ensembles, led by John Penny and Joel Shapira.

The Allina Stage
The market parking lot was transformed into a “street fest” staging area, with typically high quality outdoor sound managed by Steve Weise and crew from Creation Audio. The day of music opened with the Chris Lomheim Trio (Gordy Johnson and bass, Jay Epstein on drums). This is home territory for pianist Lomheim, as he and his wife live in one of the condos in the Market complex. As is always true whenever Chris Lomheim is near a keyboard, the music varied from sublime (“Darn That Dream”) to playful (“Billie’s Bounce”), and the small but eager early afternoon crowd didn’t seem to mind the steam rising from the asphalt. It was a good match to the steam rising on stage.

One of the most popular of our area Latin bands, Ticket to Brasil usually elicits dancing in the aisles, but heat and humidity may have discouraged movement. TTB nevertheless elicted plenty of enthusiasm with some familiar tunes like “One Note Samba” and “So Nice,” Pavel Janey always engaging on guitar and percussion; Lidia Berman flashing her bright smile as she sang and swayed with her congas; Rose Rinder’s flute tumbling through samba and bossa. If we didn’t already feel tropical, TTB sealed the deal.

Doug Haining’s Twin Cities Seven ensemble has been entertaining area audiences since 1999, reprising the sounds of the great swing bands of Basie, Ellington and more. Despite the familiarity of the repertoire, the TC7 always manages to sound fresh and includes some of the less familiar tunes of the swing era, like Johnny Hodges’ “The Peaches are Better Down the Road.” The band hit its stride early and kept going, welcoming to the stage another neighborhood resident, star vocalist Charmin Michelle. With more shade in front of the stage now, a few dancers took advantage of every swinging note.

Patty Peterson and Friends (e.g., relatives and near-relations) closed the festival with something for everyone. Nephew Jason Peterson DeLaire nearly upstaged Aunt Patty as a powerful presence on keyboards, saxophone and vocals, while Patty encouraged audience participation and proved any jazz tune can become a hot R&B tune ("The Shadow of Your Smile")… and vice versa.

The TCJS Student Stage
The small stage in the market atrium is a popular point of entertainment on weekends, and became an even more popular hub of music during the festival. While the schedule was designed to bring the audience inside during breaks between outdoor acts, the high heat and humidity may helped to create an even bigger audience for the three student bands presented by the Twin Cities Jazz Society. With adjacent concessions and merchant stalls as well as tables and chairs, the atrium filled for each set, and seemed to particularly draw in families with small children. It became a living classroom where one could sample a wide range of jazz, from bebop to post bop to avant garde. These were not “school” jazz bands, but student-led ensembles of musicians currently in high school or enrolled in college programs.

The most “out” music started the afternoon, with the Respective Sound Convergence Summit led by South High bassist/drummer Sam Wildenaurer. Chances are that most in the audience had very little experience listening to the groans, squeals, rattles and vibrations; I even heard someone say that “they don’t have to worry about listening, they each are doing their own thing.” Yet this was far from the case; clearly these three young men (with Reagan Flannery and keyboards and Will Nelson on guitar) listen intently to each other, sensing the direction of the music as it evolves. Their skills on their respective instruments were undeniable, and their imaginations unfettered. In the audience, local free jazz icon Milo Fine nodded his approval. And the youngest children, passing by, were totally charmed.

Public New Sense is a quintet of St. Paul high schoolers who have been making music together since third grade, which makes their longevity on par with many area bands of veteran professionals. Make no mistake, this is a band of veteran professionals! PNS has been getting paying gigs for quite a while. With a prodigious horn line of brothers DeCarlo (trumpet) and Devante (tenor sax) Jackson, and superb backing from guitarist Evan Slack, bassist Gavin Taylor-Stark and drummer Adam Sawyer, the band drew enthusiastic applause from the continuously growing crowd with such fare as “Mr PC,” “Footprints,” “All of Me,” and “Jordu.” And DeCarlo was sumptuous on the ballad I never identified!

The student stage closed with a set of all original compositions by leader/pianist Quentin Tschofen and his Quintet. Most of the band are alums of the Dakota Combo, with Quentin, bassist Jordan Jenkins and saxophonist Brad Allen heading into their first years of college studies, while trumpeter Caleb McMahon and drummer Cam LeCrone will be starting their second years in September. The composition titles ranged from sarcastic (“Jordan Hates Jazz”) to deceptively simple (“North”), but the music had all the structure and harmonic excitement of modern post bop played by far more experienced musicians. The horn team of Allen and McMahon was particularly sparkling and inventive. Quentin as a few more gigs scheduled, including August 13 at Studio Z in St. Paul. Not bad for a 17-year-old.

And as for the whole event, not bad for the first year! Let’s do it again.

Photos: (top to bottom) Dancing to the Twin Cities Seven; families gathered to hear student bands in the market atrium; Public New Sense, with brothers DeCarlo and Devante Jackson. (Photos by Andrea Canter)
Posted by Canterjazz at 8:58 AM