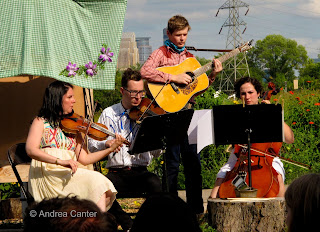 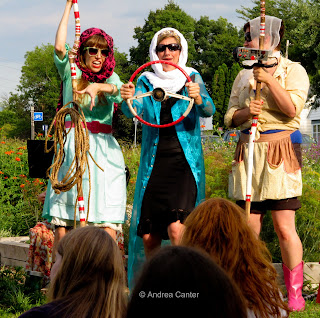 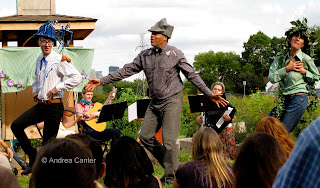 This blog is not really about jazz but about a project that likely would appeal to jazz fans and musicians because it is so… well…renegade. And it is all about music, community and creativity, which makes it very much in the same universe as jazz, right? Last Sunday I enjoyed my first Mixed Precipitation event. No, not the weather, which was totally perfect. Mixed Precipitation is a performance /cultural/foodie/artsy program that is best described in its own words:


“Our goal is to present short form projects that encourage exploration of space (public, private and civic) and collaboration across disciplines. With a varied group of performers, each summer we present our signature event, the annual community garden tour and the picnic operetta, bringing together classical music, horticulture and food in a celebration of the urban eco-system.”

I heard about the 2011 “signature event” from my friend Marjorie, who learned about it from our mutual friend, jazz singer Tommy Bruce, part of the cast for the picnic operetta, Handel’s Alcina’s Island. The idea was go spend an early evening in the JD Rivers Children’s Garden at Theodore Wirth Park, watching and listening to an adaption of Alcina’s Island, and nibbling on fare created for this event using locally sourced ingredients. The music, according to the website, would “combine Handel’s early baroque with trucker songs and classic country.” And the plot—“the garden becomes a truck stop on the American highway; scheming sorceresses Alcina and Morgana become truck stop waitresses luring brave truckers astray”—is based on Ariosto’s epic poem Orlando furious, complete with “monsters, magic spells, rings of invisibility and a flying hippogriff.”


The setting was perfect—the children’s garden was filled with assorted blooming flowers and hovering butterflies, with a Paul Bunyan-sized Adirondack Chair as a centerpiece. And the music covered just about every genre to some degree, demanding flexibility from the talented cast to move back and forth among Italian aria, Texas country and truck-stop pop. It was Rossini Meets the Beverly Hillbillies. It was strange. It was hysterical. It was a total delight, from the seductive soprano to the cowboy tenor to the winsome young boy to the baritone trucker. And chef Nick Schneider’s little morsels of equally creative if somewhat strange combinations added to the experience, from cheese stuffed cherry tomatoes to fried peppers to marinated watermelon cubes….

Mixed Precipitation’s Picnic Operetta Season continues rotating through area park and garden spaces into October. Check out the website for locations and reservations.

Photos: (top to bottom), Alcina's Island, August 28th at Wirth Park, featured eclectic combinations of musicians, strange women on a Road Trip that smacked of Thelma and Louise, and a chorus line of humanoid rocks, trees and odd creatures (my friend Tommy Bruce, in the middle, under a rock hat). (All photos by Andrea Canter)

Posted by Canterjazz at 8:15 PM