Rene Marie: No Shortage of "Imagination" 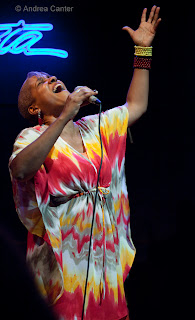 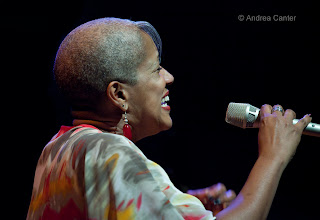 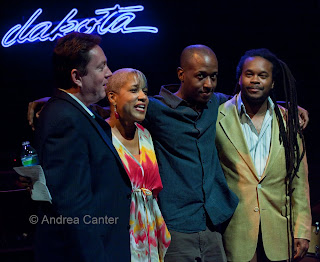 In one 70-minute set, she sang an original gnarly blues, a 19th century traditional hymn, a Spanish poem set to music, and two merged songs of “Imagination” from Tin Pan Alley and Motown. But think nothing of it, this was merely standard operating procedure for singer/songwriter/activitist Rene Marie. Of course such a performance might be well out of the ordinary for anyone else.

Rene started generating critical buzz about a decade ago, in part reflecting her talent, in part reflecting her story. Despite early success in R&B in her teens, her career was on hold for two decades while she raised her family. And after years of listening to Ella and Sarah, she looked inward to find her own voice, returning to performing in the mid-90s. Over the past decade, she’s released a string of acclaimed projects for MaxJazz, founded her own label, and most recently joined the ever-expanding family of Motema Records. Along the way, she’s raised eyebrows with her rendition of “Strange Fruit” melded to “Dixie” and her performance of “Lift Every Voice and Sing” instead of the “Star-Spangled Banner” at the Republican Convention in 2008. Most recently she has received wide acclaim for her 2011 CD, Voice of My Beautiful Country, her self-described “love song to America.” Covering a wide range of genres from jazz to blues to rock, it’s a crazy quilt of music that in sum salutes the diversity, history, and challenges of American life.

At the Dakota last night, Rene drew some material from Voice, opened with a reworking of her earlier “Vertigo,” and offered tunes recently recorded for release this fall. Most delightful was the upcoming album title track and Marie original, “Black Lace Freudian Slip,” a down-dirty blues filled with clever (if biting) lyrics and a funky dark solo from pianist Kevin Bales.

Aside from the newest music, Rene readily captivated the audience with some highlights from Voice of My Beautiful Country: Seemingly anachronistic and stylistically antithetical, putting the Van Heusen/Burke 30s standard “Imagination” together with the Temptations’ hit “Just My Imagination” is pure Marie genius at work. The initial segment reminds us that Rene Marie could make her mark simply singing standard repertoire, while the counterpart reminds us that she indeed started out in R&B; together, that imagination was indeed “running away with me” and ignited a thunderstorm from Bales. Turning on a vocal dime, Rene began “Oh Shenandoah” a cappella, her voice so resonant here that one suspects she has a built-in sustain pedal. Kevin Hamilton soon added a faint bass vibration; Baxter came in on cymbal shimmer, Bales finally in the mix as this gentle hymn swirled into incantation to higher spirits.

A Venezuelan poem set to a bolero by a Mexican composer, “Angelitos Negros,” as Rene explained, asks why painters only paint white angels. Why not black angels? Hamilton opened with a mesmerizing solo, Baxter soon adding tango-tinged rhythms. Drums and bass drove a seductive sway as Rene’s voice and dancer-like movement spelled “flamenco.” Her closing, joyful “Rimshot” was written as a challenge to drummers who hold back the rimshots during vocal passages. But drummer Quentin Baxter held nothing back, his driving rim hits in perfect alignment with Rene’s own take-no-prisoners phrasing.

On stage, Rene Marie is a powerful presence, vocally and visually. She’s one of the most emotive singers among today’s jazz artists in both phrasing and gesture, an animated storyteller—a griot, a priestess. Sojourner Truth meets Miriam Makeba meets Billie Holiday.

Photos: Rene Marie at the Dakota; Marie with Kevin Bales, Kevin Hamilton and Quentin Baxter. (All photos by Andrea Canter on July 12th at the Dakota Jazz Club)
Posted by Canterjazz at 5:09 PM