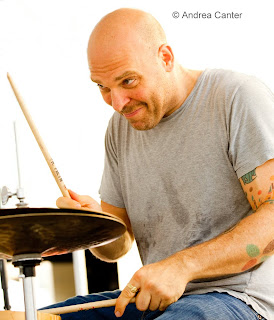 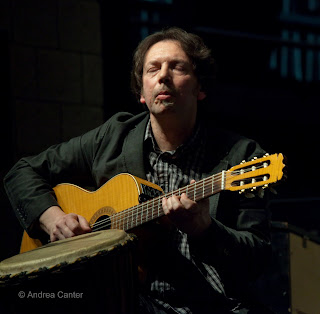 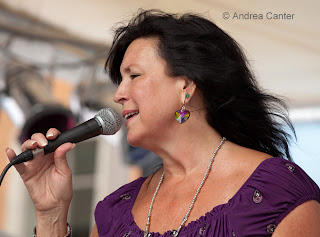 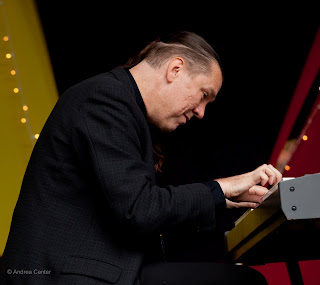 A locally based band releases its first CD on a major label. An innovative community market space hosts its first jazz festival. A jazz festival favorite makes a special guest appearance at the area’s acclaimed underground jazz room before performing at what some call the area’s only “real” jazz club. The man dubbed “the baddest organ player in jazz” brings his trio to the Dakota. And a trio of college musicians gives us a taste of the future of jazz. Just another musical week in Minnesota.

Highlights This Week
Back in March 2010, there was a two-night blast at the Walker Art Center honoring the genius of drummer Dave King. Dave tried out a few new ideas for ensembles, one of which he dubbed The Dave King Trucking Company. The name and the music stuck, and now the band is celebrating a major label CD debut, Good Old Light on Sunnyside, with two nights at the Artists Quarter (7/29-30). King has already made his mark as a composer via works for The Bad Plus and Happy Apple, but he’s clearly not done yet. He’s joined by the CD cast and his working band—saxophonists Brandon Wozniak and Chris Speed (in from New York), guitarist Erik Fratzke, and bassist Adam Linz. It will be playful and maybe even a little dangerous.

You can find great jazz, great food, and great fun all day at the Midtown Global Market’s first jazz festival, starting at noon on Saturday (7/30). The outdoor stage features heavyweights Chris Lomheim, Ticket to Brasil, Twin Cities Seven with Charmin Michelle, and Patty Peterson. Inside the market, between headliner sets, you can hear three outstanding student-led ensembles—Public New Sense, the Quentin Tschofen Quintet, and the Respective Sound Convergence Summit. These students have played in such bands as Minnesota Youth Jazz Band, Dakota Combo, Walker West, South High, MITY and more. Quentin’s group is somewhat older, all heading to college in the fall or already into their studies; the other bands feature the best area high school students from St Paul and Minneapolis. Hang out at the Market after dark, with music on the Sheraton patio from guitarists John Penny and Joel Shapira.

Another freebie—Doug Little brings his Charanga Tropicale to the Capri Theater for a fun Saturday night reprieve from the heat. Well, only in terms of climate—this band is steamy!

Throughout the Twin Cities Jazz Festival, Jon Weber entertained with his virtuosic piano skills and encyclopedic memory of anything related to music – he backed Alicia Renee at Mears Park, joined in the fracas of the annual Stride Piano Night, and hosted a weekend jam at the Artists Quarter. He’s not waiting for 2012, Jon is back in town this week. Monday night (8/1), he will be special guest at Jazz Central, the underground club managed by Tanner Taylor and Mac Santiago. It’s trumpeter Bill Simenson’s night and Weber will join in. On Wednesday night (8/3), Weber takes the stage for his own gig at the Artists Quarter.

Go out earlier on Monday (8/1) and catch another installment of the Musique Mystique series at the Loring Pasta Bar, this time with two of the hippest swingers in town, vocalist Rhonda Laurie and guitarist Robert Bell. They've had plenty of action over recent months touring east central Minnesota libraries with Rhonda's "Happy Days Are Here Again" revue.

Stay out late enough on Wednesday (8/3) to catch Maud Hixson with guitarist Dave Singley at the Aster Café. The space is simply a perfect fit to the cabaret intimacy of Maud’s songbook interpretations and Dave’s ethereal strings. Or welcome back the Nomad Jazz Series, with bassist James Buckley curating every Wednesday night. The new series kicks off in high fashion with Quartet Midwest (Kip Jones, Brandon Wozniak, James Buckley and JT Bates) at Nomad World Pub on the West Bank.

Tough decisions face jazz lovers on Thursday night (8/4). You can start your evening at the AQ and the Twin Cities Jazz Society’s Young Artists Series gig, this time featuring St. Paul Central grad Remy Taghavi and “Friends Present Deer Puncher.” The name of the band is a long story. Less difficult to explain is the talent pool – saxophonist Remy is going into his fourth year of classical bassoon (and jazz) studies at the University of Southern California; pianist Joe Strachan, a Northfield high school alum, will be heading into his junior year at the U of M where he has been pianist for Jazz Ensemble I while appearing on club stages with Jake Baldwin, Cam LeCrone, and fronting his own bands. And drummer Cam LeCrone, a graduate of Minnetonka High School, is studying music at Northwestern University. Cam and Joe were busy on the Youth Stage of the 2011 Twin Cities Jazz Festival.

Thursday night dilemmas—organ master Joey DeFrancesco leads a trio with amazing guitarist Paul Bollenback at the Dakota; the Phil Aaron Trio (with Tom Lewis and Jay Epstein) comes on at the AQ after the Young Artists set. You can’t go wrong either way—Joey D is one of the most entertaining jazz musicians around, particularly when he’s groovin’ on the Hammond B-3. The Phil Aaron Trio has been making great music since they had a long-running weekly gig at Hotel Sofitel. Pick your swing.

• August 10, Snowblind at the Artists Quarter

• September 5, Ivan Lins at the Dakota

• September 20-21, James Farm (with Joshua Redman) at the Dakota