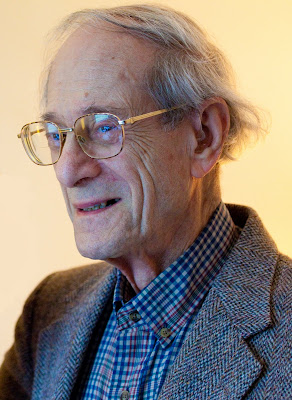 July 8, 2011 will be my father’s 90th birthday. He’s not a musician but he ought to be. He’s not only been attracted to music since his youth, he has been truly fascinated by it.

In his privately published memoirs, which he wrote in his late 70s as an exercise to increase his fluency with word processing, Dad notes envying the piano lessons offered to an older brother and sister, and even recalls some tentative “improvising” based on the music he overheard as his siblings practiced. He was the youngest of seven, too far down the line for the lessons he would have loved. But he became hooked on Debussy after listening to a local radio broadcast of piano recitals, and discovered the Metropolitan Opera broadcasts at age 12—trading in some of his regular Saturday movie matinees for Milton Cross. As a high school student he attended summer concerts by the Boston Pops, and attended his first opera in 1938, a performance of Faust with Enzio Pinza. Now, 73 years later, he wonders what to do with an enormous collection of reel-to-reel tapes (and CDs) of opera broadcasts and commercial recordings.

Like his daughter, my dad ultimately studied and practiced psychology, but music was always at the center of his life, as an avid concert-goer and, in retirement, as an “Opera Super” (playing nonsinging “extra” roles in university productions) and a prolific writer of program notes for the University of Iowa’s School of Music. (There seems to be a family trend there as well!) As an Opera Super, he had a variety of roles, my personal favorite as an Archbishop (was that Boris Godunov?) which seemed so contrary to his true self in every way. He always threatened to sing along, given that he probably knew the music and libretto at least as well as the lead cast.

Dad was honored by the university a few years ago for his two decades of program notes that, unlike most, brought the stories behind the music and composers to life in a way that connected with an audience that loved (or could love) music without the technical training of a musician. He figured that after 20 years of painstaking research (now online) and listening, he could retire from this second career, but so far the University has ignored his plan. Dad also seems unable to retire from teaching in the area’s “senior college,” where he nearly annually conducts classes for senior citizens about classical music and particularly opera. His most recent course covered various aspects of the Don Giovanni legend.

Although my dad’s primary attraction to music has emphasized classical and opera, he introduced me to jazz when I was about ten years old. But much earlier, he and my mother (also a classical music buff) had ensured their children would grow up with music. I probably heard classical music in utero, had my first “record player” as a toddler, and vaguely remember attending a variety of music programs well before starting kindergarten. My dad says I seemed particularly interested in trumpet, and gave me my first jazz recording, Jonah Jones. Al Hirt and Pete Fountain soon followed. And although I don’t remember hearing jazz recordings or broadcasts at home, my father enjoyed jazz piano, particularly Oscar Peterson and Marian McPartland, whom he heard in jazz clubs when attending professional conferences in Chicago. These artists became favorites of mine early on. I still like trumpet and piano, but I suspect my affinity for jazz bass has some genetic connection to my dad’s love of classical cello.

At 90, my dad is still quite sharp and relatively mobile. Severe arthritis limits his walking (and sitting) at times and he always gets aisle seats to facilitate moving around during long concerts. He wears hearing aids and misses pieces of conversation but seems to nevertheless catch every note of every concert—and my parents are (still) known for attending every local classical music event, from student recitals to major touring orchestras. They don’t ever attend the Iowa City Jazz Festival –too much sun, too much volume—but then they usually report enjoying the music as it travels the mile through the air to their neighborhood. And each fall they ask me to recommend specific concerts on the university jazz series. Last fall they enjoyed Kenny Barron.

So at 90 my dad continues to ponder retirement from program note research and writing but acknowledges that the focus on such projects is a great distraction from back pain. He is annoyed because he can not (yet) figure out the wiring to connect the new HD-TV to his stereo system. His computer runs too slow to suit him. And he is not available to celebrate his birthday on July 8th this year because, as usual, he and my mom are heading to Indianola for the weekend to attend 3 productions by the Des Moines Summer Opera. I know that will be a lot of sitting for my dad and he will pay for it the following week. But how else should he spend his 90th birthday?

Yes, we are celebrating my dad’s birthday with a small gathering of family and friends—two weeks late.