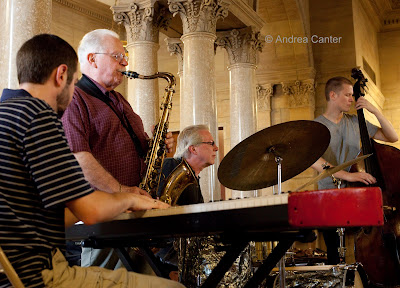 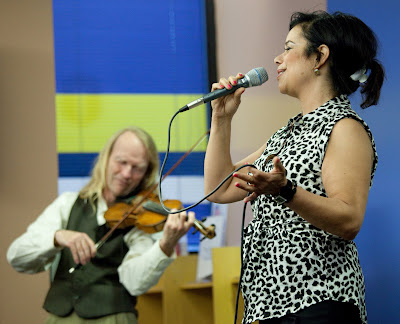 I barely had one foot out of Bryce Canyon and had to hit the “ground” running. Between music venues. I think I get most of my exercise that way these days. But it was worth the rather sudden mind shift--e.g., nearly two weeks without any live music followed by one gig after another. It was sort of like flying from our near-sea level locale to Montana, stepping off the plane at about 5,000 feet. Our music elevations here in the Twin Cities can be dizzying, too.

Festival Preludes
One of the new partnerships this year for the annual Twin Cities Jazz Festival is with the St. Paul Public Libraries, which sponsored three “preview” concerts in three community libraries. I missed the first one last week, Debbie Duncan’s performance at the Rondo Outreach Library, but heard it was well attended and received. I was impressed to see a good crowd at the Central Library on a climatically iffy Father’s Day afternoon (6/19). Although disappointed that 91-year-old Irv Williams was not feeling up to blowing his sax, the remaining musicians were anything but disappointing. These cross-generational ensembles seem to benefit from both the experience of the veterans (here, Dave Karr and Kenny Horst) and the energy of the young ‘uns (here, Tanner Taylor and Graydon Peterson). The set list included some classic jazz favorites (“Polka Dots and Moonbeams,” “Tangerine,” “On Green Dolphin Street”); each musician gave the audience a wide sampling of his talent and as a quartet, the interplay revealed plenty of mutual respect and camaraderie. It was a fun afternoon that I wished I could have shared with my Father on Father’s Day.

A few days later (6/22), the third pre-festival concert drew a full house to the Hayden Heights Library (Maplewood) despite threatening skies. Singer Rhonda Laurie and frequent collaborators Sidewalk Café (Reynold Philipsek, Jeff Brueske, Gary Schulte) were in swinging form, running through some of the material from Rhonda’s recent central Minnesota tours with her “Happy Days Are Here Again” project, supported by a Legacy Fund grant. Irving Berlin, Cole Porter, George Gershwin and more were covered with panache and a smile.

Hiromi’s New Trio Project, Under Glass
I don’t think I have missed a Hiromi gig locally since I first heard her at the Twin Cities Jazz Festival in 2004, and I also managed to catch her solo in Chicago a year ago. Her new recording, Voice, was released a few weeks ago on Telarc and features a new “trio project” with bassist Anthony Jackson and drummer Simon Phillips. But for this tour, Steve Smith mans the trapset, and as expected, he seems to perfect fit to the pianist’s range of lyricism, velocity, power and whimsy. Or he would have fit perfectly had the sound been as balanced at the Dakota as it is on the recording. And in fairness to all, the sound at the Dakota seemed markedly impaired as well as inconsistent due to the presence of a plexiglass barrier separating the piano from the rest of the stage. I’ve seen these barriers a few times, but always encasing the drummer, not seemingly surrounding the piano. I talked with folks sitting in various parts of the main floor and mezzanine, and each had a different experience with the sound. Those of us sitting closest appeared to absorb the most deflection of percussion, which in my case caused serious muffling of the bass and far more volume from Smith and Hiromi. The farther away from the stage, the better the sound blended. And this was the first set, first night; some tinkering might have improved the situation thereafter. I hope so; this trio has too much going for it to fall victim to sound issues. I am still uncertain as to the need or wisdom of the barrier. This was not a live recording session.

So, as much as one can dismiss sound quality… the set was nevertheless enjoyable, displaying Hiromi’s trademark percussive attack that can dissolve instantly into delicate cascading lyricism; her CD title track “Voice” comes off like a multi-layered Bad Plus signature; “Now or Never” playfully virtuosic; her arrangement of Beethoven’s “Pathetique” a masterpiece of invention—his and hers. I’d like to hear this show again. And really hear it. (Meanwhile I highly recommend the recording, even without Smith; Phillips has many similar qualities in his drumming. See Jazz Police review.)