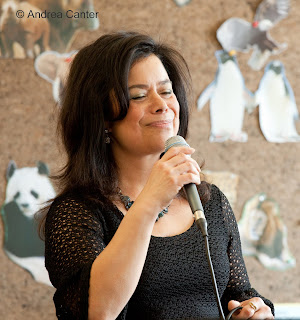 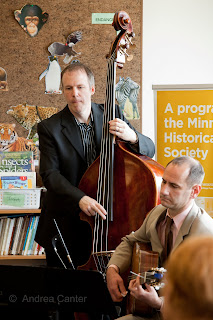 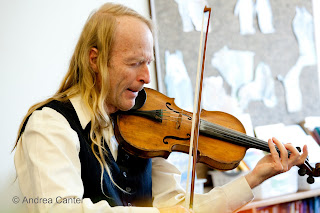 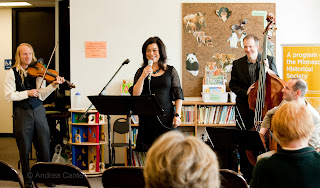 How did a gal raised in Queens end up singing Irving Berlin tunes in a library in Delano, MN? If you know Rhonda Laurie, the connection isn’t that remote. The Twin Cities-based vocalist, teacher and former paralegal spent childhood summers in the Catskills where her grandfather performed vaudeville shows. She got another taste of musical theater performing and directing high school productions. Then there was that detour working as a paralegal on Wall Street, a career she finally abandoned after years of trying to squeeze her music into her “free time.” Now in Minnesota, she found her way into the Twin Cities jazz scene where she has become an increasingly popular and steady presence, both as a vocalist and music business instructor.

The “Legacy Fund” created by the Minnesota Legislature to support the arts opened a new door when Rhonda was contacted by the Council of Minnesota's Regional Library System Legacy Program Coordinator of the statewide Legacy Fund Partnership with the Minnesota Historical Society (MHS). They were looking for a performance project to align with the MHS Exhibit, "Minnesota's Greatest Generation.” Soon, Rhonda was at work on “Happy Days Are Here Again: Uplifting Songs of the Greatest Generation,” which she notes was “developed in response to partnership audience feedback, which stated that they were thrilled with the programs that: brought top-quality jazz performers to them (rather than having to drive to the Cities). They wanted access to more jazz musicians, and that mixing of historical information in with the songs was a big plus.”

With the backing of stellar musicians like guitarists Robert Bell or Reynold Philipsek, violinist Gary Schulte and bassist Jeff Brueske (and sometimes with pianist Rick Carlson), Rhonda created a celebration of “what is so great about our music in America from the 1930s to the 1950s,” songs about life and love and the optimism of the American Dream that became the popular music of the day through radio, theater, film and records. With the help of scriptwriter Beth Gilliland, Rhonda was able to weave a script “to tie the songs and stories together… something for music fans, jazz fans and history fans alike to enjoy.”

“Happy Days Are Here Again…” became the third series of performances available to statewide regional libraries that ties to the MHS Minnesota’s Greatest Generation exhibit. Since January, Rhonda has been “on the road,” bringing the show to community libraries in Princeton, North Branch, Aitkin, Chatfield, Little Falls and more, currently scheduled through June.

My pal Mike and I decided early May was perfect for the relatively short drive from South Minneapolis to Delano—just down Highway 12, through rolling hills with trees laden with fuzzy chartreuse leaflets. In fact it was the first truly “spring” day of the season. I was expecting a quaint old library building but this one was more updated. It reminded me of my elementary school library of the 50s—lots of low shelves lined with colorful books, bulletin boards covered with pictures of “endangered species,” children’s artwork on display, reading rooms stocked with magazines. In fact the only hint of 2011 was a row of computers with WiFi. The “concert space” was an open area set with folding chairs and Rhonda’s portable sound system. It was 1 pm on a Friday afternoon, and library staff noted stiff competition with the lovely weather and gardening chores. There were a dozen of us. Rhonda noted that this was typical of the daytime audiences, while evening performances have been a much better draw.

I’ve heard Rhonda sing in many different contexts, but there’s something very special about an original show that combines great songs and great stories, entertaining while educating. The music itself was worth the drive—Rhonda (with Robert Bell, Gary Schulte and Jeff Brueske) on a songlist that included “Cheek to Cheek,” “Blue Skies,” “Love Is Just Around the Corner,” a very beautiful “When You Wish Upon a Star,” a swinging bossa arrangement of “Over the Rainbow,” Streisand’s version of “Happy Days Are Here Again,” and a clever parody of “Making Whoppee” that became a worker’s anthem, “Ain’t Got a Union.” Between songs we learned not only about the history of the music but its Minnesota, historical context. From a gal who grew up in Queens.

Next time you groan about our taxes in Minnesota, remember the Legacy Amendment, bringing access to the “happy days” of the greatest generation of songs to communities like Delano and Paynesville.

You can’t find “Happy Days Are Here Again” in the metro area, but some upcoming shows aren’t all that far away! Check dates and venues on Rhonda’s website at http://www.rhondalaurie.com/

Photos: At the Delano Library on May 6, 2011, top to bottom, Rhonda Laurie; Gary Schulte; Jeff Brueske and Robert Bell; the band (all photos by Andrea Canter)
Posted by Canterjazz at 2:15 PM