A Dogged Performance By a True Pro 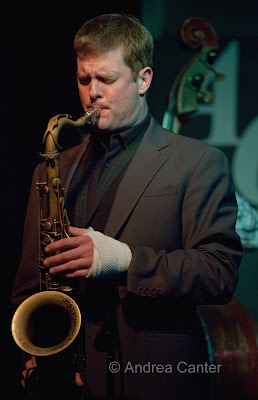 It would have been disappointing if Eric Alexander had canceled his performance at the Artists Quarter last night. Disappointing, but perfectly understandable. In town for his almost annual Memorial Day Weekend 3-night stand, Eric was jogging in Lilydale Park when a lunging rotweiler (on a leash, no less) grabbed his left hand and wouldn’t let go. As if the bite wasn’t enough, Eric is allergic to dogs, and “swelled up” immediately. But there he was on the band stand Saturday night, having spent the better part of the afternoon in the ER, his left hand wrapped to the knuckles in blood-spotted gauze. If you watched him between solos, you could tell it hurt like hell. But just listening to his dazzling cadenzas, acrobatic phrases and quantum leaps across octaves, Eric Alexander was in top form, nothing but music on his mind or in his heart. And he carried on in such fashion through two long sets.

Backed by Chris Lomheim, Billy Peterson and Kenny Horst, the Eric Alexander Quartet took no prisoners, and in addition to his trademark postbop fireworks, Eric led the troops through a mesmerizing version of the Michael Jackson hit, “She’s Out of My Life,” a no-holds-barred “Night in Tunisia,” and a surprisingly up-tempo, delightfully obtuse “Body and Soul” (“like my mentor, George Coleman”). Local trumpeter Solomon Parham distinguished himself, sitting in on two tunes, including the night’s closing beauty, “In a Sentimental Mood.”

I asked Eric during the break if he had to adjust his playing or set list to accommodate his still-bleeding hand. “At this point, it is so instinctive, I’m just playing through it, I am not thinking ‘how can I do this so it won’t hurt’—I just play.” And he just played and played.

What about that rotweiler? We can hope that, at the least, the dog will be sporting a muzzle at future public appearances. But there’s no muzzling Eric Alexander. He’s the real deal.