Craig Taborn on Sound and Improvisation 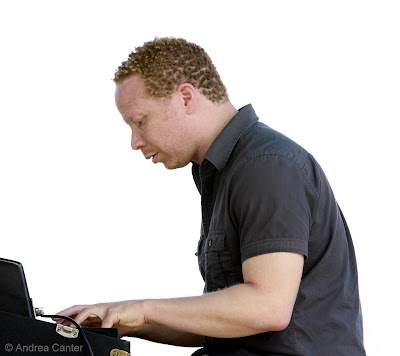 On June 7, Downbeat Magazine’s 2010 electronic keyboards “Rising Star” Craig Taborn will celebrate the American release of his first solo piano recording, Avenging Angel, on ECM. Totally acoustic and totally improvised, Avenging Angel may surprise those Taborn followers who are most familiar with his electronic wizardry and dual-keyboard gymnastics with such leaders as Tim Berne, Chris Potter, Michael Formanek, Roscoe Mitchell, and Evan Parker. And similarly, the free nature of the new project might surprise his early-career fans who recall his acoustic mainstream work with James Carter. Or maybe not. Ever since his first recordings as leader or sideman, Taborn has impressed critics and general listeners with his unique approach to his instrument and its sonic vocabulary, whether following lyrical melodic themes or creating thunderstorms of dissonant chords, often while playing Fender Rhodes (or laptop) and acoustic keyboard in tandem.

Avenging Angel is a mini-epic, a series of mostly short sound experiments in which Taborn takes a specific idea, or “detail,” and explores possibilities from multiple directions without losing the listener, altering small components that allow the music –and the mood—to move. In the press release accompanying Avenging Angel, Taborn notes that “Throughout this recording, I'm honing in on specific details. The music is really improvised: I just start. But having started, I try to relate everything that happens, like the motivic or rhythmic and textural detail, to the initial ideas as closely as I can.” He also notes the importance of the instrument (a Steinway D in the ECM studio in Lugano, Switzerland), “the sound of the piano itself and what it is generating.”

And after hearing Avenging Angel a few times, I was eager to ask Craig about the notion of a solo acoustic recording and his approach to improvisation in this context.

AC: What led you to record solo, and on acoustic piano? Had you resisted the idea of solo in the past?

“I never resisted the idea of solo piano before, but just never had the opportunity to do a solo album. Actually both of my trio recordings have a solo piano piece on them, and I have been
doing solo concerts in New York and elsewhere for the past 10 years. I was working on developing a particular approach to solo improvised performance and had been contemplating various strategies for doing. So when ECM inquired about me doing a solo piano album, it was clear that that would be the ideal way to document this project.”

AC: Regarding where the ideas came from, you say you “just start.” But what leads to that first note or set of notes—that first idea? Is it a spontaneous thing or are you (sometimes) taking something that you have been hearing in your head (or in your environment) as a starting point?

“Sometimes just listening to the present environment and getting an idea from sounds in the space works. Other times I may start with a kernel of a musical idea (a melodic fragment or harmonic cadence). And sometimes by just throwing my hand down on the piano to generate some sound or event that I then have to respond to. In general it is best not to begin with too many plans about what a particular improvisation should be because too many intentions can be very disruptive to the immediate creative process.”

AC: You mention the influence of the specific instrument. What characteristics of this particular piano in the ECM studio were significant, versus other instruments? Is there any one piano that stands out in your performing history that you would like to find again and play solo? (Has there been a favorite?)

“Well, the instrument is always a crucial factor in what music ultimately emerges because, despite any clear musical ideas one may have in the moment, and beyond the ability to technically render this, the piano's character will color the music. Also the condition it is in will enhance or compromise one's own proficiencies. The instrument in the Lugano studio was simply a very well maintained and great instrument--very responsive with a full sound but also not yielding too easily. It makes you work for things, which is crucial with improvisations because you are always forced to weigh your decisions against their difficulty as well, which can help in real time editing of ideas.

I can not think of too many specific pianos that I really could not live without playing again. There are many nice instruments but all pianos are useful for certain things and don't always lend themselves to very kind of vernacular or playing approach. And as an improviser I relish the individuality of the instrument even if it is in not very good shaped because it will give me something to work with. But that being said, a piano like this Steinway in Lugano could certainly top the list just in terms of being the most able to allow me to realize certain ideas without having to alter my initial conceptions too much.”

AC: Often you plays two instruments on a gig, acoustic and electric keyboard, sometimes one hand on each. I read in a recent interview where you said "I'm trying to hear multiple ideas all the time. A lot of that is an extension of things I heard Sun Ra do.” So when playing solo here, are you pursuing multiple ideas simultaneously with left and right hand? Or is your approach totally different when it is just one instrument?

“I am often thinking of more than one idea. Actually often more than two ideas. Playing different instruments does not change this for me at all. I think that, with a battery of keyboards, it is easier to play more than one timbre at the same time, so I may make use of that possibility in those situations. However, in a more limited way, the same is also true of the piano. The keyboard instrument was designed to enable one person to play multiple parts musically, and an extension of that is the idea that, through touch and tonal control, you can try to get some of this out of the piano, between the fingers and the two hands. So in this music I am definitely attempting to get at least two ideas working, and sometimes three or four, but there is a limit to this for me both technically and conceptually, but I am always working to extend my abilities in this regard.”

AC: Do you find yourself coming back to some of the soundscapes you created for Avenging Angel in other contexts (like when you are playing with other bands)?

“Well, I think there is some carry over conceptually between certain pieces on Avenging Angel and the work I am doing in my current trio (with Gerald Cleaver and Thomas Morgan). However, the emphasis with the solo project is pure improvisation and, while a good part of the trio is improvising as well, there is a bit more through-composition and structure going on there. But I think that the basic aesthetic terrain is consistent between these two projects.”

AC: It seems you have been fascinated with pure sounds, and extremes of sound, since your teens or before. What’s your earliest recollection of fascination with sound of any sort? Was it that way from the beginning with the piano (was it the sound itself that caught your attention?)

“In childhood I remember always being into the different moods that music could create and I had an intuitive awareness that sound and listening context were inextricably tied to this mood-setting. For instance, I remember my father playing the piano downstairs at night with one lamp on, and smoking cigarettes. He would play blues things in minor keys with a darker feeling to them and it would be mesmerizing and very soothing, too. And I was very much aware of this in incidental music in films--how the swelling music in Star Wars was linked to the sound effects and how all of this made a sonic whole, even though they were created by different "departments" of the Lucasfilm machine. But I still hear the incidental music in Star Wars attached to the sound effects-- the sound of tie-fighters speeding by as trumpets play these staccato notes. It was the sounds and the notes as a whole that made everything work a certain way. So I think I always understood that playing notes was only a small part of making the music effective and meaningful.”

Avenging Angel is indeed effective and meaningful music, revealing not only details of the sonic potential of the piano but insight into the creative mind of Craig Taborn.


Photo: Craig Taborn (at the Iowa City Jazz Festival)--and no, that is not an acoustic piano.

Posted by Canterjazz at 3:14 PM