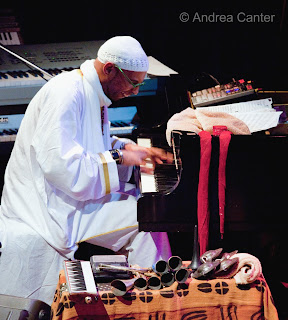 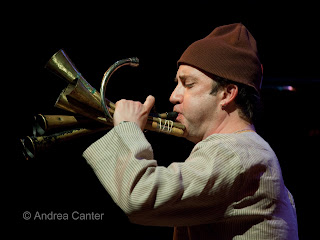 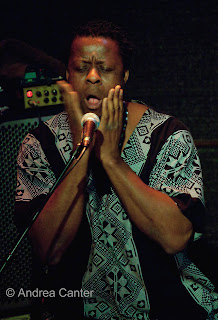 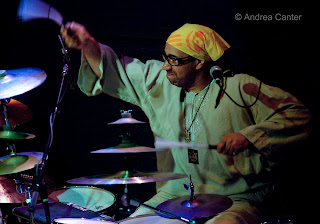 Omar Sosa and his Afreecanos Quartet may have played the best worst-attended show of 2011 last night (4/27) at the Dakota. At least I hope there isn’t another gig with such a wide discrepancy between quality of art and quantity of patronage. It wasn’t an empty club, but even with the curtain drawn between bar side and dining room, the room was only half full. If you missed it (probably you did!), you have another chance tonight, and I bet there are tickets left.

This was Sosa’s first appearance since the Dakota was housed at Bandana Square. In the interim, the Cuban-born, Barcelona-based sound magician has furthered his reputation for melding the musics of native cultures (particularly African, Cuban and Latin) with American jazz and roots, and high tech wizardry, creating something that is all of the above and like nothing else. His piano at times suggests Abdullah Ibrahim, Chucho Valdez, Craig Taborn, and Jason Moran (especially with his use of recorded voices), while his electronic keyboards and loops bring in the funk, rock and hip-hop of a new generation, somehow balancing avant garde, montuno, and folkloric meditation. His cohorts add to the mélange, particularly multi-reedist/percussionist Peter Apfelbaum who can blow like Chris Potter on soprano and tenor and suggests Charles Lloyd on flute, while twisting it all out of shape on the melodica and raising eyebrows (and ears) with what looks like a fistful of small horns. Marque Gilmore adds layers of supportive fury on drums, while Childo Tomas lends both voice and pulsating electric bass.

Sosa and the Afreecanos Quartet return for two sets at the Dakota tonight, 7 and 9 pm.

Photos: (Top to Bottom) Omar Sosa surrounded by percussion and electric gizmos; Peter Apfelbaum blowing through one valve to multiple bells; Childo Tomas adding hand percussion to his own face; Marque Gilmore flailing at his drum kit (all photos by Andrea Canter at the Dakota, April 27th)
Posted by Canterjazz at 5:04 PM