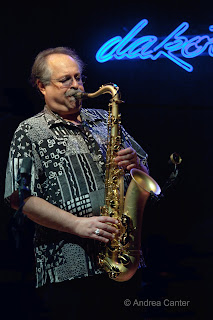 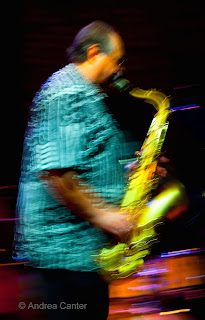 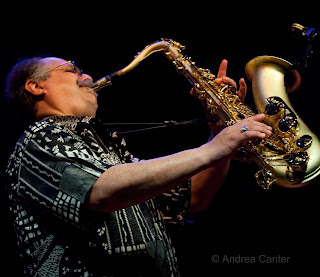 It’s been two years since Joe Lovano launched his firecracker quintet, Us Five, releasing one of the top CDs of the year, Folk Art. Initial appeals of the ensemble were the unusual 2-drum format and the presence of soon-to-be-Grammy-upstart Esperanza Spalding on bass. Although she rejoins Us Five in the recording studio and some tour stops, bass duties have pretty much been reassigned to young Peter Slavov. And on the current tour, Francisco Mela has yielded one trapset to veteran Steve Williams, leaving pianist James Weidman and drummer Otis Brown III as Lovano’s original partners. It’s a testament to Lovano’s art and leadership that Us Five soars in all combinations of these musicians. The band’s second recording, Bird Songs, was released earlier this year, a tribute of sorts to the genius of Charlie Parker, and in fact, documentation of the genius of Joe Lovano. (See review on Jazz Police)

Us Five generated plenty of enthusiasm at the 2010 Twin Cities Jazz Festival, making the relatively light turnout for the band’s Dakota debut last night disappointing. Maybe even hard core jazz fans got caught up in the NCAA Final Four. If so, redemption is but a few hours away as Us Five plays two more sets at the Dakota tonight. And can there be any better redemption than Charlie Parker and Joe Lovano? The late set crowd last night was treated to Joe’s radiating tenor solo, then 2-drum trio opening on “Folk Art,” soon morphing into a medley of Parker melodies that seemed to materialize on the spot, Joe later recounting “Ko Ko,” “Confirmation,” “Moose the Mooche” and “Passport.” But I suspect we also caught subliminal snatches of others (including a quote of “Rhythm-a-ning”) as the band proceeded at full tilt, dancing a fine and moving line between rich bebop and serpentine 21st century postbop abstraction. The closing “Barbados” began as a two-drum duel, a call and response between Brown and Williams that at times tossed single beats back and forth like a pingpong ball. Slavov’s solo here was vibrant and vibrating. But it wasn’t all Parker; on taragato and soprano sax, Joe generated a haunting series of solos on Ornette Coleman’s “Lonely Woman.”

The canon of Charlie Parker is so well known, and so widely performed, that it might seem unlikely that we can still hear anything new in the “Birdyard” – but Joe Lovano, like Charlie Parker, can turn any familiar phrase into a new composition. As on Bird Songs, in live performance the audience is treated not only to virtuosic soloing and tight ensemble interaction, but to the transformation of classic works into new music. Lovano is not content to respect Charlie Parker’s legacy—he reinvents it. Which in itself is the ultimate tribute to Bird.

Photos: Three views of Joe Lovano, all from opening night's late set at the Dakota, April 4th. (Photos by Andrea Canter)
Posted by Canterjazz at 11:34 AM