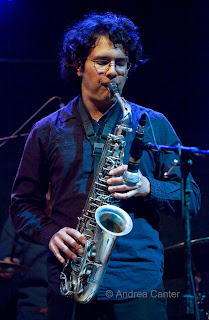 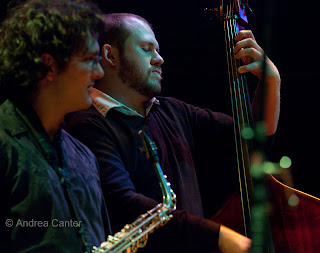 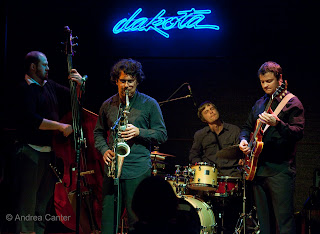 I first became acquainted with the stirring music of Aakash Mittal when he contacted me about reviewing his 2009 debut recording, Possible Beginnings. Listening to a few samples, I didn’t need much persuading. The young Colorado-based saxophonist had a sound somewhere between Coltrane and Rudresh, which made perfect sense given his American/East Indian heritage. He brought his quartet to a Late Night gig at the Dakota two years ago, returned last summer on the Sixth Street stage of the Twin Cities Jazz Festival, and last Saturday night again brought some excitement to the Dakota’s Late Night series as part of a Midwest tour, now highlighting music from his second (2010) release, Videsh.

Much happened between the two recording sessions, notably at least two trips to India where Aakash studied with some traditional masters and the band performed with native musicians. The sights and sounds of his encounters in his father’s homeland pervade Videsh and many of the compositions that filled the late night air at the Dakota. But we also enjoyed the inventive reconstructions of American standards and hints of a current project involving ace trumpeter Ron Miles, one that Aakash hopes to shape into the next recording. He has no intention of shaking off his Indian roots, but he also intends to push his music forward as he explores a wider range of postbop possibilities. Still in his 20s, Aakash Mittal hears a world in his saxophone – or flute and clarinet, the latter of which was a stunning addition to his late set.

Saturday night, unsuspecting ears, including mine, might have missed the core melodies of the opening selections—including a thoroughly deconstructed “All the Things You Are” and a raga-touched sax vamp on “Take the Coltrane.” Jean-Luc Davis (bass) and Matt Fuller (guitar) soloed with assertive grace on “Things,” while Fuller and Mittal’s harmonies on “Coltrane” suggested a horn duet. Aakash continuously returned to one motif, from many angles. I did catch the thread of “You Don’t Know What Love Is,” Fuller suggesting a sitar through his use of loops and Davis enhancing the mournful theme through his exquisite solo. The guitar/sax harmony became an elegantly out-of-register merger on Aakash’s bustling “A Cumin Seed in the Mouth of a Camel,” one of a handful of tunes from Videsh that often featured the emotive drumming of Josh Moore. About a half interval apart, sax and guitar led the way through “The Street,” Mittal’s homage to the raging traffic of India’s urban roadways, fluttering and chaotic. The quartet closed with a stunning “October,” a new composition recently presented in Denver with Ron Miles, a preview of what lies ahead.

Aakash Mittal has found friends and fans in the Twin Cities, fueling his desire to return. He’s due now for a prime time gig.

Photos: (Top to Bottom) Aakash Mittal; Aakash and Jean Luc Davis; the Aakash Mittal Quartet (all photos by Andrea Canter at the Dakota, March 12, 2011)
Posted by Canterjazz at 5:24 PM