Music That Needs to be Heard: Is Anyone Out There? 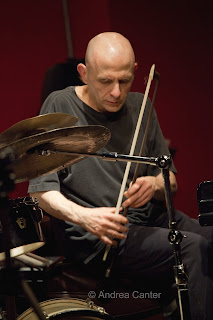 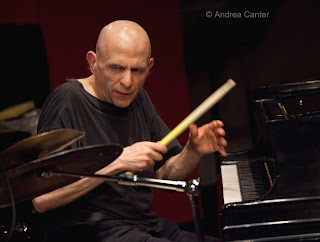 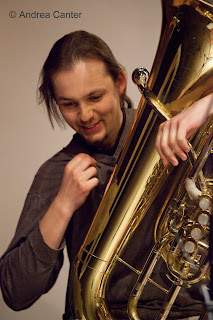 © Andrea Canter [Full disclosure. I am the Vice President of the Twin Cities Jazz Society.] The Twin Cities Jazz Society sponsors a series of concerts every year, dubbed Jazz From J to Z. The series title is intended to describe the wide range of music that falls under the jazz label, from trad to swing to big band to bebop to Latin to… even to avant garde and “free” music. But the performance on Sunday night by local free legend Milo Fine was, as far as I can tell, the most “free” ever scheduled by TCJS. The venue was not chosen lightly, and the decision to hold this event at Studio Z seemed logical, given that this space has been home to the area’s quintessential experimental music ensemble, Zeitgeist, and over the years has hosted many of the area’s most creative artists. It’s a fairly small space, maybe if you squeeze you can fit in 70-80. It seemed like the perfect venue for Milo Fine and two new trios playing new music. There was no expectation of a large crowd, and even Milo himself noted before the concert that he is not doing this to attract a big audience, to make money, but because he loves the opportunity to play with like-minded musicians, because he loves to make this music. But to quote my friend Pamela, “this is music that needs to be heard.” But to be heard, it has to fall on human ears. With only nine in the audience, that’s a mere 18 ears. Where was the new music audience, which surely numbers far more than nine on any given night? After all, beyond Zeitgeist, this is a community that sports the St. Paul Chamber Orchestra’s Engine 408 series of new music (revived for the coming season), the Community Pool series at the Black Dog (serving a similar function as the past Fantastic Fridays series), the varied programming of the Walker Art Center (leading it to inclusion on Downbeat’s “Top 100 Jazz Clubs” list), and improvising musicians like Stefan Kac, Adam Linz, Brian Roessler, Mike Lewis, Nathan Hanson, the Fantastic Merlins, and of course, Milo Fine. Yet it is also a community that has seen an erosion in venues that support new music—notably the demise of programming at the Clown Lounge and Café Maude in the past few months. Why only 9 people at Studio Z Sunday night? An early Sunday evening, innocuous weather, free parking across the street, a $10 cover. No competing Super Bowl or Academy Awards. Three of the ten were from TCJS, one was mom to one of the musicians. That leaves only five who had no apparent obligation to attend. Was it a bad night for jazz generally? Across town at the Dakota, inventive vocalist Rachelle Ferrell played to a full house. Chances are slim that the majority of her audience were fans of free improvisation despite Ferrell’s highly creative style. And it was Sunday night, not a lot going on at other venues. Milo Fine plays a lot, a small venues like Homewood Studios and the West Bank School of Music. He has his own following, not droves, but a lot more than nine. Was it a drawback to present an artist at a new venue—would the usual audience pass on yet another gig? But Fine had organized two new ensembles playing new music. This was not a repeat. Was there too little promotion? Milo had announced the gig on his website well in advance. TCJS announced the concert back in September, covered it in detail in its March issue of its monthly newsletter, the Strib carried the announcement, Studio Z promoted the show among the most likely audience, its own. As for the music, the nine of us in the audience Sunday night were treated to the diverse sounds and forms that have always marked Milo Fine’s music. We witnessed the act of artistic creation as Fine (on percussion and piano), tuba master Stefan Kac, and, in turn, cornet/flugelhorn player John O’Neill and saxophonist/vocalist Scott Newell took off on a range of musical ideas, some dispatched quickly, some slowly woven, always fitting Whitney Baillett’s definition of jazz—“the sound of surprise.” It is indeed a sound that needs to be heard. Programmers from the TCJS to the Walker to jazz clubs and concert halls, as keepers and promoters of American culture, need to ensure that this music is accessible. And when it is, we as curious listeners, need to find it, and go hear it. And be surprised. Milo Fine plays in various configurations about every month, between his Homewood Studios and West Bank School of Music series. There’s often something cooking at Studio Z, be it Zeitgeist or guest artists; and the old Hamm’s Brewery is hosting the innovative series of compositions from Ann Millikan, House of Mirrors (last installment on March 29th). The Black Dog Café in St. Paul’s Lowertown hosts free improvising musicians through its Community Pool series, most Friday nights (Dean Magraw and David Seru this Friday night, March 25th).

Photos: (Top to bottom), Milo Fine bowing a cymbal; Fine between drum kit and piano; Stefan Kac (all at Studio Z on March 20, 2011, photos by Andrea Canter)
Posted by Canterjazz at 4:02 PM