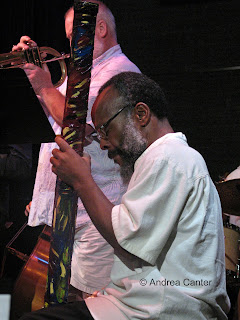 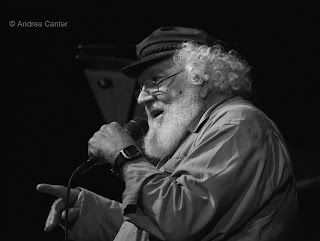 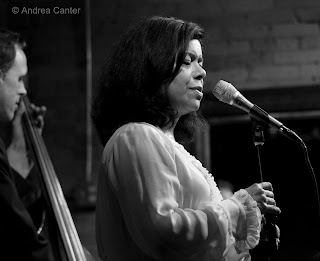 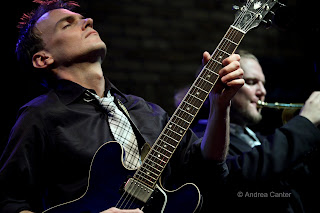 Highlights, Last Week
• The Dakota Combo at the Dakota (2/27). Hot off their “Mingus Spirit” performance in New York, the Combo proved adept at off-the-cuff standards, swinging with Irv Williams and Ginger Commodore at the Dakota Foundation for Jazz Education fundraiser.

• Branford Marsalis Quartet and the Terence Blanchard Quintet at Orchestra Hall (2/27): Finally, Orchestra Hall seems to have overcome the sonic demons that so often have plagued jazz events there. And Marsalis and Blanchard found no obstacles at all as they gave us two soaring sets and showed off some of the hottest young talents around, particularly drummer Justin Faulkner and Kendrick Scott.

Highlights, This Week
Traditional African rhythms meld with modern jazz grooves at the Artists Quarter this weekend (3/4-5) with the return of the Loba African Jazz Trio, featuring Côte d’Ivoire natives Loba and Serge Akou along with Stokely Williams. Guitarist Loba has been compared to Hendrix and Beck.

Over at Studio Z, lovers of experimental music and particularly the inventions of Zeitgeist will find new works to ponder and celebrate this weekend (3/4-5). These four innovators of percussion, woodwinds and piano will present new chamber works by Ben Broening (founder of the Third Practice Festival), Justin Merritt (St. Olaf Professor of Composition), and Harvey Sollberger, plus works by local composers Brent Michael Davids and Ann Millikan.

And speaking of innovators, on Saturday afternoon (3/5, 4-6 pm) you can enjoy the multiple talents of AACM stalwart Douglas Ewart. His visual artistry (“Visual Chants”) is on display at the Center for Cultural Wellness in south Minneapolis, augmented by his music performances (on multiple, often home-made reeds and percussion objects), accompanied by saxophonist Donald Washington (another treat, he does few public performances here), laptop specialist Stephen Goldstein, and special guests.

If you have spent even a few minutes in the Artists Quarter, you have undoubtedly met Davis Wilson, “the man at the door.” Davis sells tickets but his stories, rants and critiques are free, and his introductions of musicians (“The Artists Quarter is pleased and flipped…”) are legendary. Sunday night (3/6) you can turn the tables on Davis as we celebrate his 75th birthday with a club party.

Chanteuse Maud Hixson and hubby/pianist Rick Carlson—surely one of the most endearing musical teams in town—return to Erté in northeast Minneapolis (3/4). It’s perhaps an odd little space for music but the eclectic menu is music-worthy and, in any space, Maud and Rick elevate standards to fine art. Maud returns the next night (3/5) for another sublime evening, this time with swinging accordionist Denny Malmberg.

More vocal finery this week: Michael Feinstein brings his Sinatra Project to Orchestra Hall (3/5-6); Lucia Newell and Dean Magraw make a fine pairing on the Musique Mystique series at the Loring Pasta Bar (3/7), and another dose of Lucia awaits at the Artists Quarter on Thursday with her own quartet featuring Phil Aaron on keys. At the Dakota, Patti Austin brings years atop smooth jazz and R&B charts to the intimate club setting (3/8-9), while the legacy of Nina Simone—daughter known simply as “Simone”—debuts on Thursday (3/10). And Rhonda Laurie returns to the Aster Café (3/10), in the midst of her statewide tour of “Happy Days Are Here Again.”

Guitarist Todd Clouser rounded up some local pals (and special guests) to form A Love Electric, previewing the band’s debut recording at the Dakota last fall. He’s on tour with the band now, stopping in at the Artists Quarter on Wednesday night (3/9) with Bryan Nichols, Adam Meckler, Chris Bates and Greg Schutte.

Saturday, March 5: George Maurer Group public television taping at the Dakota at 4:30 pm (and sold out for his 8 pm show at the Dakota); Joann Funk and Jeff Brueske at the Lobby Bar (St Paul Hotel); U of M Jazz Ensemble with guest Michael Nelson at Ted Mann, capping off the U of M Jazz Festival; Vicky Mountain with James Allen at First Course Bistro.

Wednesday, March 9: Charmin Michelle and Denny Malmberg at Fireside Pizza (Richfield); Steve Kenny and the Bastids opening for Todd Clouser at the AQ.