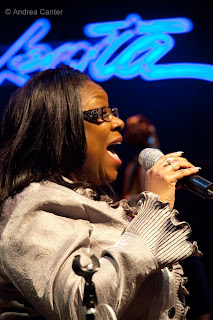 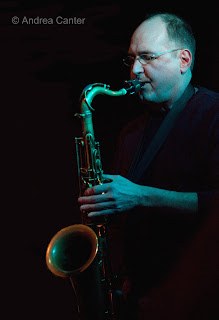 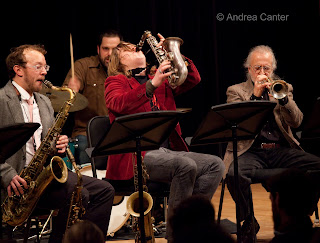 Now it really feels like spring! We got by the hockey tournament without a blizzard so green grass can’t be far behind! And jazz around town should put us into an upbeat mood—Patty Peterson, Bobby and Ginger Commodore, Laura Caviani and Pete Whitman, Milo Fine, Jane Monheit, the music of Mingus…. Every jazz fan can find something familiar and something new.

Highlights, Last Week
Mike Stern with the JazzMN Orchestra (3/12, Hopkins High School). It’s great to see a middle aged guy bounce around the stage like a teenager on caffeine. Stern puts everything into his performance, including a good dose of glee. And fronting a big band, especially one with the talent of JazzMN, seemed like a perfect fit. Debbie Duncan rocked the house herself with an unforgettable “Hard Hearted Hannah.”

Aakash Mittal Quartet (3/12, The Dakota Jazz Club). Colorado-based Indo-American saxophonist Mittal made his third Twin Cities visit in three years—let the annual gigs continue! See blog, March 14th.
Miguel Hurtado and Friends (3/17, Artists Quarter). Seems just a short time ago that this young drummer was playing with middle school pals, but now, a graduate of the Manhattan School of Music, Miguel Hurtado is making his mark on the local jazz scene. And with such friends as ace guitarist Zacc Harris, rising star bassist Jeremy Boettcher, and another young lion, pianist Joe Strachan, he’s proving he’s ready for prime time. The band proved versatile and assertive on its covers of Monk, Shorter and a particularly sophisticated take on “My Ideal.”

Highlights, This Week
The one gig I really want to hear is 1200 miles away in Manhattan. Former Twin Cities resident Nancy Harms is making her way in the Big Apple, and this weekend appears as guest vocalist with the Wycliffe Gordon Quartet at The Kitano. It’s a very cozy space in a Japanese hotel that caters to serious music (and sushi). If you are in the NYC area this weekend (3/18-19), check it out.

Here at home, you can never go wrong with Patty Peterson and Friends, and they will be in full force at the Artists Quarter (3/18-19). Actually this is the first time the full band has been together at the AQ—Bobby Vandell, Peter Schimke, Billy Franze, Paul Peterson, Jason Peterson DeLaire. Patty can handle anything from the Great American Songbook to the contemporary pop songbook or a gem off the R&B charts, and this band has energy to burn. And a big fan club so get there early! Covering a somewhat similar route with more blues and gospel infusion, Bobby and Ginger Commodore celebrate their respective birthdays with their long-standing band at the Dakota (3/18-19). This annual bash features pianist Lee Blaske, bassist Mark Weissburg and saxwoman Kathy Jensen, along with surprise guests.

Although they perform together in many configurations, it is rare to catch pianist Laura Caviani and saxophonist Pete Whitman alone together. On Saturday night (3/19) as part of the Jazz @ St. Barney’s series (at St. Barnabas Church in Plymouth), the duo will perform standards and original works, as well as music from tours of South America. This is an opportunity to hear two of the area’s most accomplished performers and composers pared down to just their own voices.

Switch gears, an unusual night at The Cedar (3/19) features creative guitarist Marc Ribot, opening with a solo set before accompanying his own score for the Charlie Chaplin film, The Kid. Ribot premiered the music in January at the New York Guitar Festival.

Switch gears again with a pair of trios headed by the innovative explorer, Milo Fine, in a Twin Cities Jazz Society “Jazz From J to Z” concert at Studio Z in Lowertown St Paul (3/20). This is likely the most “outside” offering from TCJS in its series history. Each trio features Fine on piano and percussion, and Stefan Kac on tuba. Then you can toss in John O’Brien on cornet and flugelhorn for one set, and Scott Newell on sax and vocals for the second set. One thing for sure, no one knows exactly what will happen from one moment to the next, but it will be intriguing no matter where they go.

Switch gears yet again – Monday and Tuesday nights (3/21-22) find Jane Monheit back to the Dakota. Her latest release, Home, is her first as producer, and finally we hear the music Jane wants to sing, the way she wants to sing it. Home is much closer to her live shows than any previous recording, which means it has more spontaneity, more warmth, more risks, and the result is arguably her best CD yet. The music will swing and tug at the heart, and I am confident we will hear Jane’s recent foray into scatting on at least one tune or two. Last time here, she mentioned she had resisted scatting because she knew she would not sound like Ella. True. And Ella never sounded like Jane Monheit.

Monday (3/21) brings a rare gig from master saxophonist Dave Milne, performing in a small ensemble setting at Jazz Central (4th Street and Central NE), the underground performance space that relies on word of mouth and private invitation. Consider yourself invited, by me.

The final installment of the Mingus Series at MacPhail (3/24), “Meditations on Integration” features a septet of local wizards led by bassist Adam Linz—Mike Lewis and Chris Thomson on saxes, Greg Lewis on trumpet, Scott Agster on trombone, Bryan Nichols on piano and JT Bates on drums. And there will be a special segment featuring the young Mingus students of the Dakota Combo, hot off their award-winning performance at the Charles Mingus High School Festival and Competition in New York. Learn more about the music at the 7 pm pre-concert talk, and then settle into the acoustic-friendly space of Antonello Hall for an night of the music that sparked the Mingus large ensemble tour of Europe in 1964. It’s music that could have been written yesterday. Or tomorrow.

• Sunday, March 20: Patty and the Buttons, brunch at the Aster Café; Rachelle Ferrell at the Dakota

• Monday, March 21: Headspace at the Artists Quarter; Charmin Michelle and Joel Shapira, Musique Mystique at the Loring Pasta Bar; James Buckley Trio at the Red Stag; Lori Dokken's Singer Showcase at Camp Bar (a revival of Lori's gig at the Times, with some of the area's hottest new talents)

• Wednesday, March 23: Wolverines at Hell’s Kitchen; Charmin Michelle and Denny Malmberg at Fireside Pizza (Richfield); Steve Kenny and the Bastids, followed by the Dave Karr Quartet at the Artists Quarter