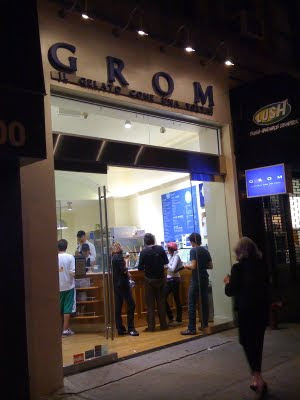 Every time I go to New York, friends roll their eyes and say something about the high prices for dining and lodging. My experience—there’s not much difference between finding good jazz and good food in New York. It’s everywhere you turn, often cheap, and often the best you’ve ever experienced. Even by accident.

From my recent five-day excursion:

• Dizzy’s Prelude: Call it a late lunch. Looking for something light, knowing I’d get dinner to fulfill my $20 minimum at Dizzy’s, I stumbled on Planet Sushi, about 78th and Amsterdam. Lunch special for $9 sounded light enough, “three rolls” with soup and salad. Soup and salad were fairly substantial, but the three rolls were generously cut into 18 pieces of sushi. The waiter was disturbed that I left half of it. Who knew it was lunch for at least two?

• Between Mingus and Mingus: A quick snack seemed in order when we returns for a mere 30 minutes between the opening day of workshops at the Mingus High School Band Festival/Competition and the festival’s special Mingus Orchestra concert at St. Bart’s. Down the block from the hotel, at 77th and Amsterdam, The Cottage promised Chinese bites. A small order of dumplings would hold me over til our late post-concert dinner. But like Mingus, there’s more to it than the notes. That $5 order of Szechwan seafood dumplings turned into a large bowl of a dozen pillows of seafood bliss in a pungent broth. Maybe “Orange Was the Color of Her Dress” but red was the color of my lips and my taste buds really sang, “Meditations” on shrimp and scallions.

• Pappadam, From Mingus to India: After the Mingus Orchestra, where do you take 20 Minnesotans for a late dinner, especially seven hungry teenage musicians? Is there a spot on the Upper West Side that has room for 20? Our concierge found an Indian restaurant at 75th and Columbus (Mughlai) that was not intimidated by our party. It helped that it was well after 9 pm. For the sake of self preservation but also adding much to our enjoyment, the host suggested a multicourse family style dinner. It was all good if mostly toned down to the lowest common denominator in terms of heat but then there were those pappadams that started things off with more zing than I ever imagined could be baked into those wafer-thin flatbreads. Order pappadams most places, you get rather bland cruch. Here, your sinuses were delightfully opened, your taste buds awakened with a jolt. Add some of the bright green chutney and all that is so good in Indian cuisine crackles on your tongue. Spice, jolt, bright colors, perfect harmony—it was Mingus in India.

• Gelato in Motian: Friday night, we finished our entrees at a very tight, but very good and reasonable Indian spot (Sagwat) and headed over to Grom for my second helping of the best chocolate fix I can remember, anywhere, in any form. This is a little gelato haven (76th and Broadway, the first American outlet of an Italian chain), “cioccolato extranoir” the signature chocoholics’ scoop. It’s the same color as my Subura Forester –you think it’s black til you see the sunlight hit it and realize it is the darkest brown this side of black. As the name implies, Extranoir is the darkest, richest creamy chocolate ice imaginable. Only the percussive antics of Paul Motian (at Cornelia Street) could make you momentarily forget that feeling of nirvana that comes when you taste something so decadent that you know what the last sensation should be when you take your last breath. Or at least your last bite.

• Big Band Mango: I credit vocalist Kendra Shank for taking me to one of the best Vietnamese spots I’ve visited (L’Annam), and I come from a metro area with over 100 Vietnamese restaurants and delis. But I’ve never had shrimp with green mango. A bit like a Thai green curry but not as rich, it was simply a perfect, slightly sweet and sour sensation, the flavors blending much like the following performance of the Vanguard Jazz Orchestra (about a ten-minute walk from L’Annam to the Vanguard), familiar and new, swinging and soaring, some bite, much joy.
When I was 16, I visited New York for the first time as part of a high school spring break tour. We were allotted one afternoon on our own (probably something no public school would allow in 2011) and I opted to take myself to Grand Central Station and splurge on lunch in the Oyster Bar. I ordered boullibaise, mostly because it was something I was sure was not on any menu in the state of Iowa, and in part because I thought my French teacher would be impressed. I really didn't know what it was. I still remember the sensation of that sweet/salty broth and the tender fish, scallops and lobster chunks swimming beneath. Maybe that's why I come to New York expecting to be surprised by new tastes.
I spent what at the time was a whopping $6 on my bowl of boullibaise circa 1967. In 2011, I spent less on that bowl of dumplings, feeling that same surprise and satisfaction. Much like hearing Tepfer and Motian at Cornelia Street.

Photo: Grom, gelato at all hours, in all flavors (photo found online)