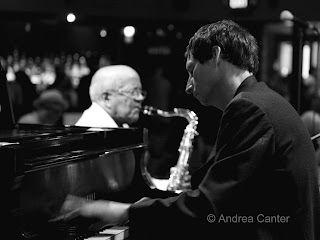 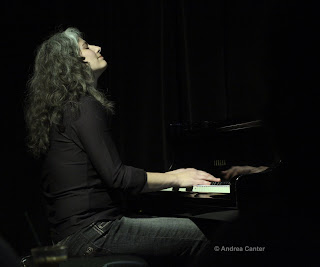 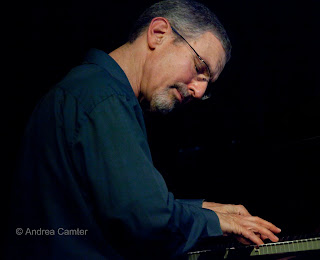 Again, a busy jazzy weekend in the Twin Cities! Weather should be a plus, and as the snow melts, the jazz steam rises!!

Highlights, Last Week
My friend Ray Hayes assures me I missed the best show in a long time—Matthew Shipp solo piano at the Loring Theater. I trust Ray’s judgment. He tossed off his tickets to the Kronos Quartet, I kept mine. And the Kronos put on two really interesting nights of music at the Walker Art Center. Still, I know Matthew Shipp was quite special. But I did enjoy:

• Willie Akins Quartet at the Artists Quarter (2/9). A veteran hard bopping tenor saxman based in his native St. Louis, Akins brought together a band he recorded with over ten years ago, and it was some of the most energetic straight-ahead I’ve heard locally. With Moorhead State pianist Simon Rowe, St. Louis bassist Willem von Hombracht and masterful young drummer Montez Coleman, they ran through classics from Coltrane, Tyner, Jimmy Heath and more with a nearly full-house at the AQ. Hard to imagine better music of any sort for a $5 cover.

Highlights, This Week
The annual Bobby Peterson Memorial Piano Showcase fills the Artists Quarter this weekend (2/11-12), with an enviable cast of local piano greats—Peter Schimke, Tommy O’Donnell and Mary Louise Knutson on Friday, and Phil Aaron, Laura Caviani and Bryan Nichols on Saturday. It’s a great opportunity to sample the best (and diverse) keyboard artists while paying tribute to the one who got away too soon, the late Bobby Peterson. Ask local pianists who they really admire or who truly inspired their work, and chances are high they will mention Bobby as a mentor, teacher, and friend.

One night each year, the St. Paul Jewish Community Center transforms itself into a top flight jazz venue, presenting a top Israeli artist. This year, the acclaimed guitarist Roni Ben-Hur is featured with his quartet, Saturday night (2/12). Ben-Hur has been on the New York scene longer than most of his fellow Israeli jazzers, and has established himself as one of the top guitarist of his generation. And if we judge him by the company he keeps, he remains high on the list! His quartet for this tour includes a knock-out Chicago pianist, Ryan Cohan; long-time associate bassist Santi DiBriano; and busy drummer Steve Williams. Cohan’s 2010 CD, Another Look, was one of my faves of the year.

Also this weekend (2/12-13), Two of our “sultry divas of jazz,” Connie Evingson and Ginger Commodore, pay tribute to Peggy Lee and Nancy Wilson at the Capri Theater, part of its Legends series. Long-time cohorts as half of Moore by Four, both singers have their own history with the music, Evingson having honored the songs of Peggy Lee with her recording (Fever) and subsequent acclaimed revue (in part revived recently at the Jungle Theater); Commodore saluting Wilson a few years back at the Dakota. There’s a distinctive difference in style separating the songbirds, but as Capri Artistic Director Dennis Spears notes, “They are both known for their sultry and sassy jazz styles, their class and elegance, and their experiences in acting.”

On the experimental/avant garde scene, some fine options this week: At Studio Z, it’s a long fun weekend with Zeitgiest and pianist/composer Carei Thomas with the annual Playing it Close to Home concert. This series celebrates our local creative artists, this year with winning songs from the Eric Stokes Song Contest and works by the ever-inventiveThomas. And it’s all in the neighborhood on Friday (2/11), as just across the street at the Black Dog, it’s the next installment of the Community Pool: Deep End Music Series, tonight with Bryan Nichols, Nathan Hanson, Brian Roessler and Peter Leggett –a quartet to truly buzz your brain and ears.

It’s Nichola Miller Week! Catch the swinging hipster for brunch at Hell’s Kitchen on Saturday (2/12), in trio for Valentine’s Day, again at Hell; and at the Dakota on Wednesday (2/16).She doesn’t get on the Dakota stage as often as she should, but when she does, watch out! She recorded live a while back and now returns for a night of sass, swing, and probably a little mayhem, in the dashing company of Rick Carlson, Keith Boyles and Nathan Norman, on Wednesday (2/16).

• Wednesday, February 16: Steve Kenny and the Bastids followed by the Peter Schimke Trio at the Artists Quarter; Charmin Michelle and Denny Malmberg at Fireside Pizza (Richfield)


Photos: (Top to bottom) Peter Schimke, Mary Louise Knutson and Phil Aaron, all appearing in the Bobby Peterson Memorial Piano Showcase at the Artists Quarter (Peter and MLK on Friday, Phil on Saturday) (Photos by Andrea Canter)
Posted by Canterjazz at 9:58 AM