From Israel to New York to St Paul: Roni Ben-Hur at the JCC 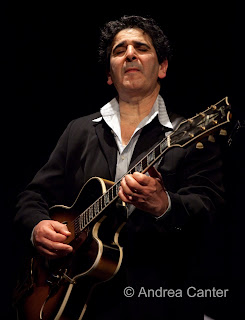 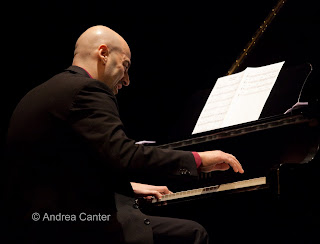 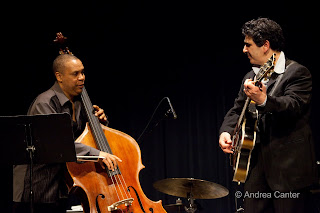 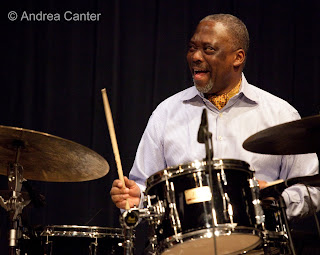 The St. Paul Jewish Community Center is not generally on the jazz map, but perhaps it should be. Once per year, the JCC turns its auditorium into a jazz hall to feature a visiting Israeli performer. (And there’s a growing list to choose from, as the Israeli jazz diaspora continues to bring more and more talents to the American jazz scene.) Last spring, the JCC presented virtuoso flautist Mattan Klein. For 2011, the guest was the Roni Ben-Hur Quartet, featuring Israel-to-New York transplant guitarist Roni Ben-Hur, Ryan Cohan on piano, Santi Dibriano on bass, and Steve Williams on drums. Each of these musicians has outstanding credentials – Ben-Hur long associated with Barry Harris since arriving in New York in the mid-80s and leader on a handful of outstanding recordings, including 2010’s Fortuna (Motema); Cohan has been burning up the Chicago jazz scene, releasing one of my favorite albums of 2010 (Another Look) on Motema; Dibriano has played with a long list of titans, including Cecil Taylor, Hank Jones, Freddie Hubbard and Larry Coryell; Williams backed the late Shirley Horn for 25 years, as well as appearing with Milt Jackson, Freddie Hubbard, Mulgrew Miller and more.

There’s surely a lot to be said for Ben-Hur as both a performer and composer. His chops easily moved from ballad to bop to samba to fusion, and for one not brought up in the American tradition, he can swing like crazy (e.g., Harold Alden’s “Sleeping Bee”) and corral that blues feeling (e.g., Strayhorn’s “Intimacy of the Blues”). But he is most effective in the global realm of folkloric influences (“Recado Bossa Nova,” “Carinhoso,” “Eshkolit”), including his own “Eretz.”

But the most satisfying element of the nearly two hours of music was the empathetic interplay among the quartet--none of whom appear on Ben-Hur’s recent, highly touted release, Fortuna; only Dibriano has recorded with him to date. Cohan can comp with subtlety or dramatic fire, while his solos ranged from beautiful cascades (on “Like a Lover”) to break-neck gymnastics (“Recardo Bossa Nova”) and lightning streaks (“Guess Who”); Dibriano has a huge dynamic and emotional range, a seriously classical style emerging on balladic arco solos (“Like a Lover”) and a melodic undercurrent well serving a duet with Ben-Hur (“Carinhoso”); Steve Williams absorbed plenty backing Shirley Horn, showing a multitude of voices, particularly engaging in dialogue with Dibriano on “Intimacy of the Blues,” across all percussive tactics on “Eretz” and rattling cages on “Guess Who.” Without piano, the remaining trio provided a stunning interlude on the gorgeous arrangement of the traditional “Eshkolit,” while paring down “Carinhoso” to a bass/guitar duet suggests a future recording project.
This quartet plays with the fire and spice of the best, from the opening high energy of Ben-Hur’s “Fortuna” to the ferocious swing of “A Sleeping Bee” to the touches of fusion and Latin of his closing “Guess Who.” Hats off to the JCC for the foresight to bring such creative and joyous jazz to a community space.

A longer version of this review will be posted on Jazz Police.
Photos: (Top to Bottom) Roni Ben-Hur; Ryan Cohan; Santi Dibriano duets with Ben-Hur; Steve Williams. (All photos by Andrea Canter on 2/12/11 at the St Paul JCC)

Posted by Canterjazz at 2:39 PM