The Best Is Yet to Come: Roberta Gambarini at the Dakota 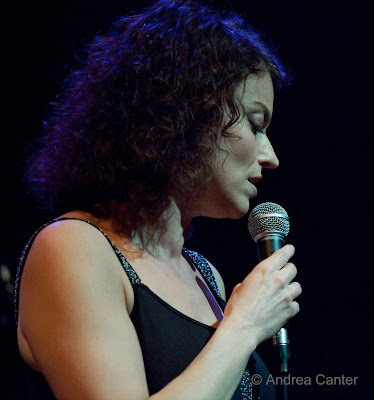 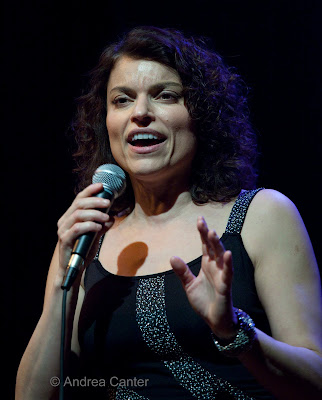 At the Dakota on January 31st, Roberta Gambarini was good. Even wonderful. (I did stay for two sets!) But I hesitate to say “amazing.” There is no doubt she is a very talented jazz singer who deserves (and gets) serious accolades. I gave her plenty myself a year ago after her stunning sets at the Dakota. But I think calling her “the best new singer of the past 50 years” (the often quoted praise of the late Hank Jones) is over-reaching and, if anything, a disservice to Roberta as much as to other top echelon vocalists of the 21st century.
“One of the best” would be fair. But is she more remarkable than Kurt Elling, Dee Dee Bridgewater, Tierney Sutton, Diane Reeves, Karrin Allyson, Mark Murphy, even octogenarian Sheila Jordan in her early career? What about the far less heralded but truly remarkable Mary Stallings—who perhaps should be considered “new” at several points in time? What about the avantly talented Brit, Norma Winstone? And within the last fifty years, what about the late greats, Irene Kral, Shirley Horn, Abbey Lincoln and Betty Carter? I’ll stop, you get the point. It would be hard for anyone to be “the best” given the company they keep. And to be so dubbed at age 38 borders on the ridiculous no matter how talented, no matter how bright the future.

Roberta is perhaps more in the mainstream than all of the above, in the mode if not the embodiment of Ella, the Great American Songbook her playground. She has a lovely voice quality and usually (not every note last night), her intonation is spot on. To open solo on “Stardust” was gutsy and a perfectly executed beginning. But she had some odd trouble navigating the steep intervals at the start of “On the Sunny Side of the Street” later in the first set, which is a very difficult song and one I heard her handle a year ago with elastic ease. And while she seemed relaxed, even playful in her interactions between with the audience between tunes, in song she seemed a bit stiff. Not just serious, but somewhat rigid in her physical presence. Until she sang a ballad (“Poor Butterfly,” “Lush Life”), and particularly a ballad in her native Italian (e.g., her gorgeous “Estaté”… who needs a translation?). Maybe that’s a key – is it harder to really inhabit a lyric and sell it to your audience when your are singing in your second language? Does it require just a shade more concentration that drains emotional projection? Or is there just a little kernel of fear that you might not live up to the hype of the “best new singer of the past 50 years?”

Roberta’s strength may be her exquisite phrasing (“You Don’t Know What Love Is,” “The Heather on the Hill,” her medley from Porgy and Bess). And she scats well and often, at times her vocalese truly serving as a horn section (sax, trumpet, trombone—and at times all of the above) on such memorable blue turns as “No More Blues” and “You Ain’t Nothing But a JAMF.” But at times the scat also felt self conscious, like a competent but not quite natural translation from another language. In the second set, she seemed more relaxed, and gave us a totally different batch of songs. Which was a good thing, as many in the criminally small audience were carry-overs from the early show, which was not nearly as well attended as her talent (and hype!) deserved.

Throughout both sets, one had to be hooked by Roberta’s arrangements. Often she started a song with the less familiar verse, a cappella or with just one of her exceptional cohorts (pianist Eric Gunnison, bassist Neil Swainson, drummer Willie Jones III), suddenly shifting into full ensemble mode or very slowly adding one more voice, then one more. Nothing seemed recycled. But in some ways, the opening night of 2011’s Dakota show fell a little short of a very similar show in early 2010. The material overlapped considerably, which can readily invite comparisons. And while it was well beyond what most singers accomplish in one evening, it was a tad short of exceptional.

Make no mistake. Roberta Gambarini is already a remarkable talent with three outstanding American recordings behind her. But surely her best is yet to come. She can do some amazing things with her voice now and I like to imagine how she might approach modern, even pop or “out” repertoire. We already had Ella. The lasting magic of Roberta Gambarini will not come from being the “best” of the past fifty years, but –very likely--from being one of the greats of the next fifty years.

Photos: Two moods of Roberta Gambarini. (Photos by Andrea Canter on January 31, 2011 at the Dakota.)
Posted by Canterjazz at 1:48 PM